An optical illusion painted on a Wuyi Road sidewalk captures the imagination of a passer-by. 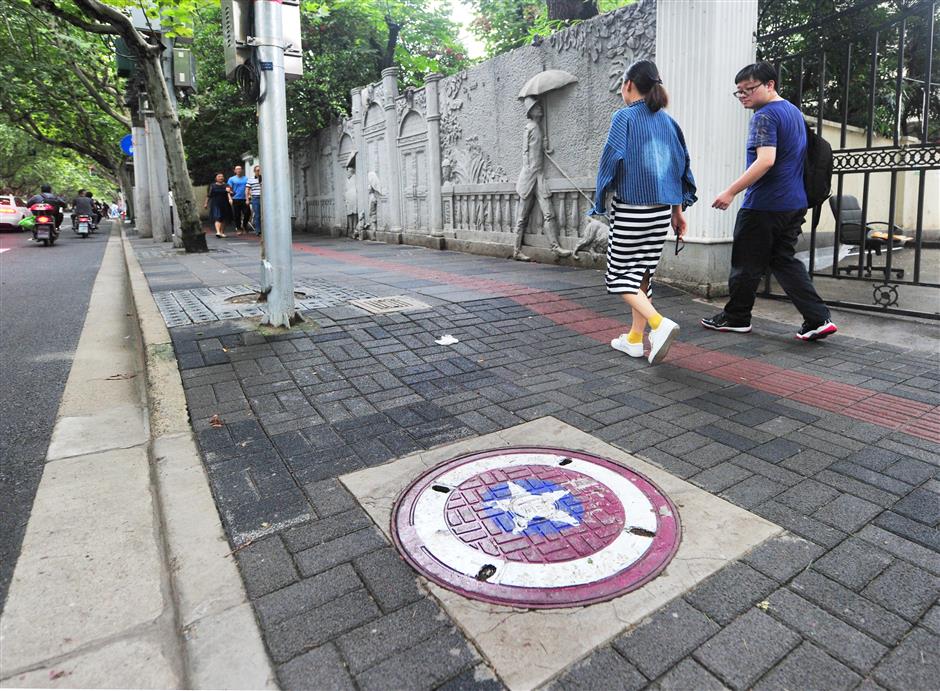 A pedestrian notices Captain America’s shield, one of the paintings on the sidewalk of Wuyi Road in Changning District.

Graffiti on downtown Wuyi Road has become an attraction as part of a project to fill the historical road with culture and innovation.

Cartoon characters and elements such as Sponge Bob, Captain America’s shield, smiling baby faces and sunflowers have been painted on manholes, bicycle parking slots and beside trees and fire hydrants on sidewalks on the road in Changning District.

The 40 paintings are attracting many pedestrians to take photos or learn about the garbage sorting, low carbon travel and urban renewal ideas behind some of the paintings, which are aimed at enhancing the artistic ambiance of the road.

“Urban revamping shall not only focus on building renovations but also culture and humanity,” said Zhang Chao, director with Yingdian culture and innovation center, a social organization in charge of the painting project.

Eight artists, mostly residents in communities on the road, spent a week to create the graffiti. They were initially drawn for a temporary creative market called “We interesting” by the end of August. The event aimed to encourage more residents to take part in the ongoing renewal project on the road with games, art installations and a bazaar.

After the tents and stalls were removed, the paintings on the ground attracted a lot of attention and became an Internet sensation with an appreciation of how the paintings were living in harmony with the historical villas on both sides of the road as well as its tranquil atmosphere.

Similar projects will be launched on the road in future, not only with paintings but also various events and public activities, according to the Huayang Road Subdistrict.

These future events will be themed on “interesting people, things and stuff” about the road, an official with the subdistrict said.

The 1.7-kilometer-long road, originally Tunsin Road, was built in 1925. It is one of 64 roads in the city under protected status and lies within Changning’s historical conservation zone.

According to a blueprint released earlier, Wuyi Road is to become an “international culture and innovation street,” featuring fashion boutiques, traditional restaurants and recreational facilities. 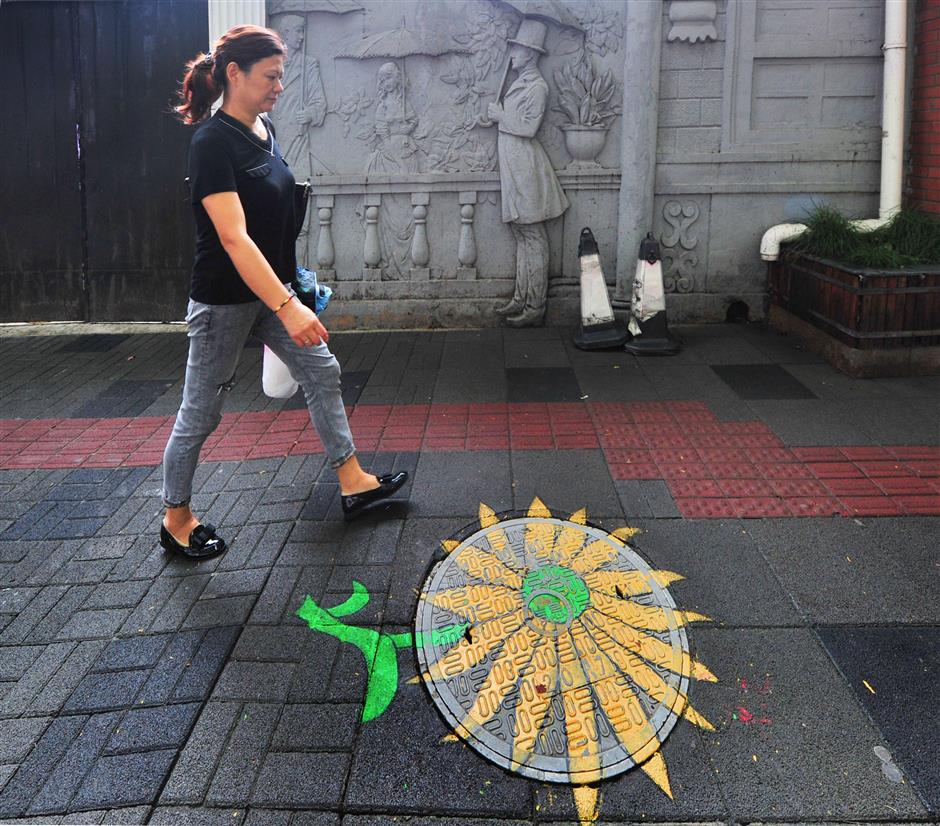 A pedestrian passes by one of the paintings on the sidewalk of Wuyi Road in Changning District. 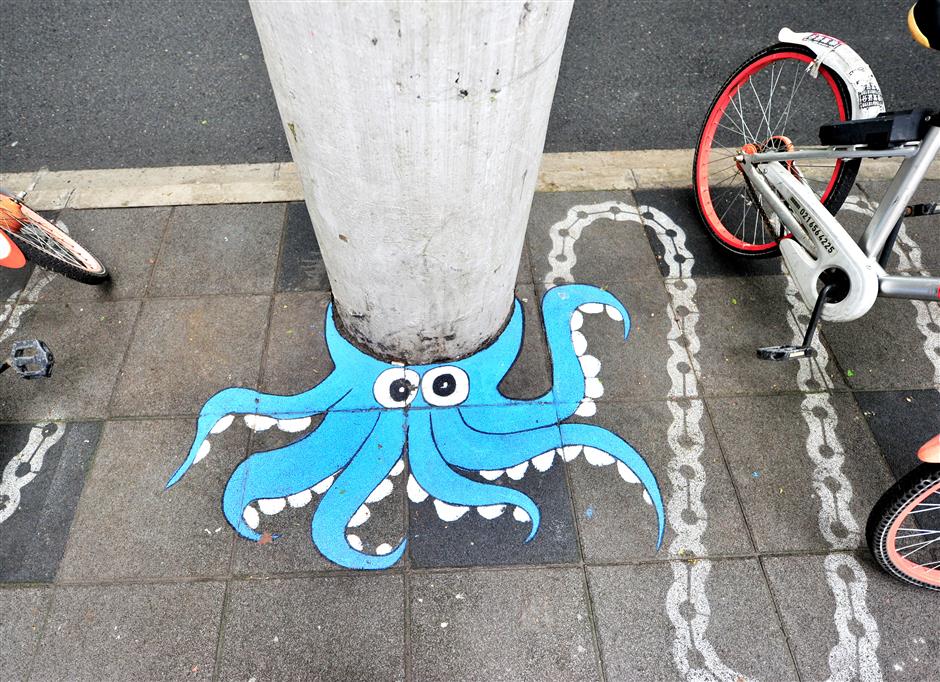 “The future Wuyi Road is expected to become an ‘exposition street’ for the city’s haipai (Shanghai style) culture,” said a district official in charge of the revamping project. Its historical ambiance will be restored while public facilities will be improved to make the communities along the road dynamic and warm, he said.

The future Wuyi Road will be “tranquil and elegant,” according to the official.

To achieve the goal, the Meijiale wet market at 304 Wuyi Road, an old-school market the subject of complaints about environmental issues, has already been shut down. It will become a modern, convenient and recreational market with a 300-square-meter garden at the entrance.

A nearby former health service center of the Jiangsu Road Subdistrict has been relocated to Yuyuan Road to allow commercial and social facilities to be built for local residents.

The former site of Shanghai Feilo Acoustics Co, the first listed firm on the Chinese mainland, will become an art and culture center. New and preserved buildings will occupy the 16,000-square-meter area.

The center will feature a community activity space, art and cultural exhibition sites, workshops for creative designers and stores displaying and selling artworks.

Cultural performances, exhibitions, art bazaars and handicraft workshops will be held regularly, along with traditional Huju Opera, monodrama and comedies.

Existing businesses on Wuyi Road will be evaluated in order to retain some popular and characteristic stores while bringing in new cultural brands, according to the district government.

A popular scallion pancake store will remain. Its owner, surnamed Mu, has been making and selling the traditional snack for over two decades.

In the future, residents and visitors will be able to taste traditional snacks such as these pancakes and youtiao (fried dough sticks), as well as visit cafes or jewelry stores on the road flanked by tall plane trees, the district government said.

The face-lift is part of Changning’s plan to revamp four downtown roads to improve the environment and highlight their cultural heritage.

Xinhua, Yuyuan, Wuyi and Panyu roads, with their historic villas and former residences of famous personalities, are all being refurbished. 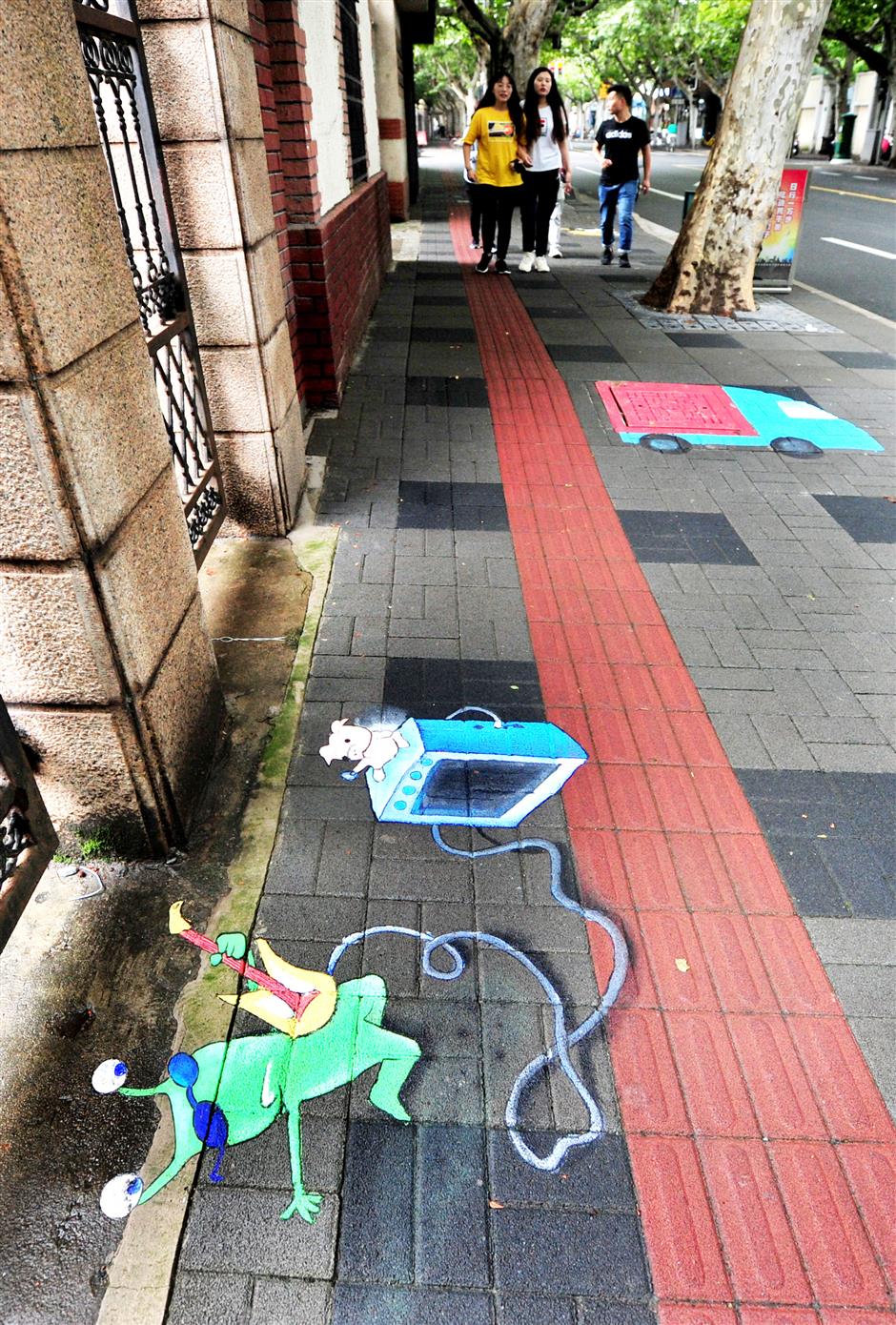 Pedestrians about to pass by the graffiti paintings on the sidewalks of Wuyi Road in Changning District.