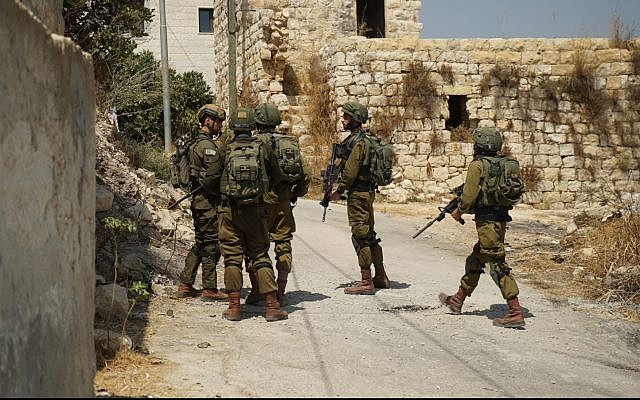 Israeli security forces reportedly arrested three Palestinian men in the West Bank early Saturday as they searched for the terrorists behind a bombing attack that killed an Israeli teenager.

According to Palestinian media reports, Israeli soldiers arrested two of the men during raids in the village of Ein Arik. The third man was said to be a resident of the nearby village of Ein Qiniya.

It was not clear what their connection to the bombing near the Dolev settlement was. 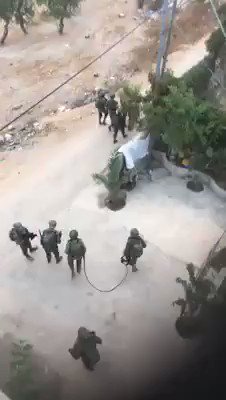 24 people are talking about this

The two villages are located near Ein Bubin, a natural spring where an explosive device detonated Friday as three members of the Shnerb family from the central Israeli town of Lod were visiting.

The teenage daughter, Rina, 17, was pronounced dead at the scene. Her father, Eitan, a rabbi in Lod, and her brother Dvir, 19, were taken by military helicopter to a Jerusalem hospital in serious condition. 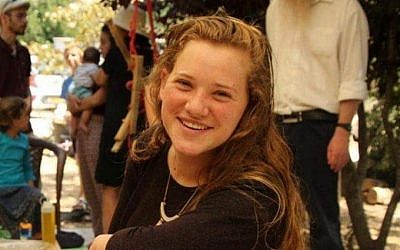 The army said an improvised explosive device was used in the attack. Police sappers determined that the bomb had been planted earlier at the spring and was triggered remotely when the family approached it.

Following the bombing, security forces launched a large-scale manhunt in the area, with the IDF chief saying he believed they would apprehend the killers “quickly.”

“We are in the midst of a manhunt that is being led by troops from the Israel Defense Forces, Shin Bet security service and Israel Police. We are focusing our large operational intelligence effort to finding the perpetrators of this severe and deadly terror attack,” IDF chief Aviv Kohavi said at the site of the bombing on Friday afternoon. 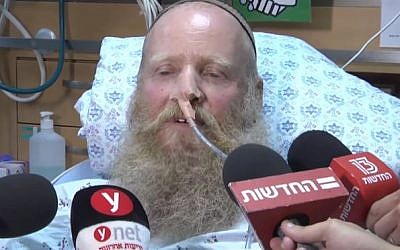 Rabbi Eitan Shnerb speaks to reporters from his hospital bed after being wounded in a terror attack that also killed his daughter Rina and wounded his son Dvir on August 23, 2019 (Screencapture/Ynet)

IDF Spokesperson Ronen Manelis said the military did not yet know the identities of the culprits or if they belonged to an established terror group or were acting alone.

Channel 12 quoted unnamed officials as saying that the size and complexity of the the device indicated that one of the major terror groups was behind the attack.

Troops were working to find the terrorists behind the attack as quickly as possible, under the general understanding that the more time they have to flee, the more difficult the search effort becomes. 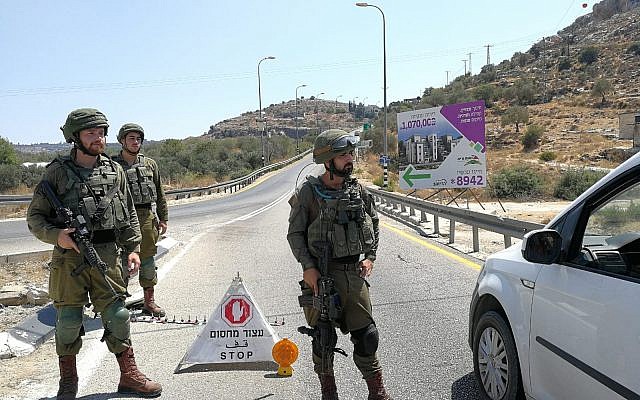 Israeli soldiers set up a roadblock as part of a search effort to find terrorists who set off a bomb near the Israeli settlement of Dolev in the West Bank on August 23, 2019, killing an Israeli teenage girl and seriously injuring two other people. (Israel Defense Forces)

Prime Minister Benjamin Netanyahu, who also serves as defense minister, said he was receiving constant updates on the search effort and would meet soon with the commanders of the country’s security forces.

“Security forces are in pursuit of the vile terrorists. We will reach them. Our long arm will pay them their dues,” Netanyahu said.

Speaking with reporters Friday from his hospital bed, Eitan Shnerb said he was in good condition, but had a piece of shrapnel in his stomach and a broken hip.

Dvir’s condition on improved to moderate on Saturday morning and he was conscious after undergoing surgery the day before, according to Channel 13 news.

Israeli military officials have warned in recent weeks of an increase in terrorist activities and violence in the West Bank and Gaza Strip in the lead-up to next month’s Israeli elections.

Last Friday, a Palestinian terrorist rammed his car into two Israeli teenage siblings, critically injuring one of them, outside the Elazar settlement in the central West Bank, just south of Jerusalem.

The car rolled over after the terror attack, and when the assailant tried to emerge from it, he was shot dead by an off duty police officer who was driving behind him.

Earlier this month, an Israeli religious seminary student, Dvir Sorek, was found stabbed to death outside the settlement of Migdal Oz. Israeli security forces tracked down the suspected killers in approximately 48 hours, arresting Palestinian cousins, Nasir Asafra, 24, and Qassem Asafra, 30, from the village of Beit Kahil in the southern West Bank.