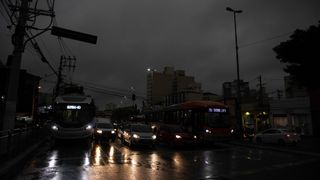 There’s so much smoke from wildfires in the Amazon rain-forest that São Paulo plunged into darkness on Monday afternoon (Aug. 19), with day turning into night.

The atmosphere, reminiscent of Mordor in “The Lord of the Rings,” was a reminder that forest fires in the Amazon have surged 82% this year compared with the same period last year (from January to August), according to data from the Brazilian government’s National Institute for Space Research (INPE), as reported by El Pais.

That smoke, combined with clouds and a cold front (it’s winter in the Southern Hemisphere), led to the midnight-like darkness in São Paulo, The Washington Post reported. The fires are largely burning in northern Brazil and have prompted the Brazilian state of Amazonas to declare a state of emergency.

“The smoke didn’t come from fires in the state of São Paulo, but from very dense and wide fires that have been happening for several days in [the state of] Rondônia and [the bordering country] Bolivia,” Josélia Pegorim, a meteorologist with Climatempo, said in an interview with Globo (translated from Portuguese with Google Translate). “The cold front changed direction, and its winds transported the smoke to São Paulo.”

The Rondônia fire, located near Bolivia, has burnt nearly 2,500 acres (1,000 hectares). This blaze’s thick smoke is prompting health concerns and has already forced an airplane to be diverted due to visibility concerns, according to Painel Politico, a Brazilian publication. This fire is reportedly human-made, Painel Politico noted, which is fairly common for fires in Amazonia.

For much of the year, fires are rare in the Amazon. But during the drier months of July and August, “many people use fire to maintain farmland and pastures or to clear land for other purposes,” NASA’s Earth Observatory reported last week.

(This human-made-fire situation isn’t so different from what the United States faces. From 1992 to 2012, 84% of the 1.5 million reported wildfires in the U.S. were caused by people while 16% were ignited by lightning strikes, a 2017 study published in the journal Proceedings of the National Academy of Sciences found.)

Huge areas of the Amazon rain-forest are burning from human-made fires, as shown by this satellite image taken Aug. 13.

“Wildfires in the Amazon are not natural events but are instead caused by a combination of droughts and human activities,” researchers of a 2018 study in the journal Nature Communications wrote in The Conversation. “Both anthropogenic climate change and regional deforestation are linked to increases in the intensity and frequency of droughts over Amazonia.”

The fire-drought alternation leads to a nasty feedback loop. Trees store less water during droughts, so their growth slows, meaning they can’t remove as much carbon dioxide, a greenhouse gas, from the atmosphere, the researchers wrote in The Conversation. These trees then drop extra leaves or die, in effect providing tinder for fires. And without a dense canopy to keep in the moisture, the forest loses some of its humidity, which normally prevents fires from starting.

“These changes are exacerbated by ‘selective logging’ of specific tree species, which opens up the canopy and further dries out the under story and forest edges, which are drier than the interiors,” the researchers wrote. “The result: normally fireproof rainforests become flammable.”

The fires are so bad that the hashtag #PrayforAmazonia was trending on Twitter this morning (Aug. 20). This news follows on the heels of another concerning development: Deforestation in the Amazon spiked 278% in July, according to satellite data from the INPE. Brazilian President Jair Bolsonaro, a climate change skeptic who has promised to open the Amazon to industry, disputed the satellite findings and promptly fired the INPE’s director-general, Ricardo Galvão.

In the meantime, studies show that deforestation could starkly alter the Amazon. If 20% to 25% of the Amazon becomes deforested, the landscape could transform from a forest into a savanna. Currently, deforestation is at 17%, Mongabay reported.

What’s clear is that deforestation affects more than just the Amazon, as the residents of São Paulo found out yesterday. One Twitter user there even called it #gothamcity, referencing Batman’s grim metropolis. 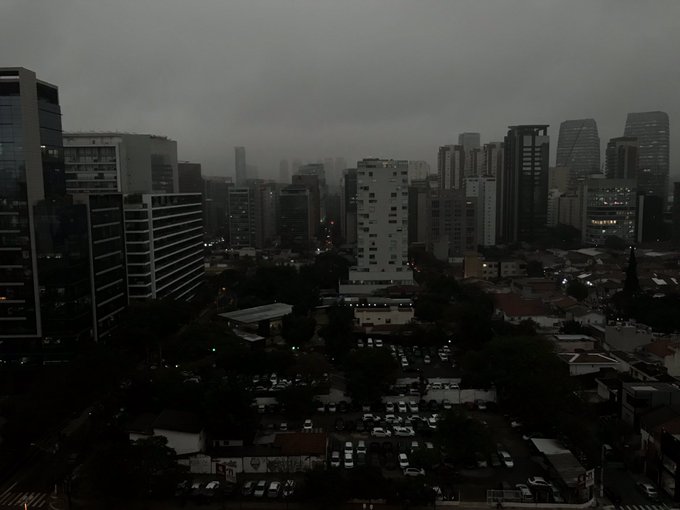 184 people are talking about this