(THIS ARTICLE IS COURTESY OF INDIA TODAY NEWS AGENCY)

Kashmir: How Line of Control has changed in 70 years

In 1947, 65 per cent area of Jammu and Kashmir was under India’s control. Today, only 45 per cent of princely state area is under its control. India’s response to Pakistani intrusion resulted in a war that was declared over in 1949 with the United Nations intervening and accepting that the merger of Jammu and Kashmir with India was legal. A ceasefire line (CFL) was drawn depending on the actual positions held by the two armies — led on both sides by British generals.

The ceasefire line temporarily bifurcated Jammu and Kashmir with India getting control of about 65 per cent of the state and Pakistan the rest 35 per cent.

This NJ9842 can be considered as the base for Siachen glacier. This demarcation was based on the impression that the crestline follows a northward direction. The high mountains in the trans-Himalayan region had not yet been fully explored.

The ceasefire line was formalized in a Karachi Agreement signed in July 1949 between India and Pakistan with two UN observers signing as witnesses. It has been reported that Jawaharlal Nehru had briefed the Indian delegation going to Karachi on UN resolution.

This resolution meant, Nehru told the delegation, that any “no man’s land” – if left undemarcated by the ceasefire line agreement — would belong to India on account of Jammu and Kashmir’s legal merger with India.

The sanctity of the ceasefire line was to be maintained till the final settlement of the Jammu and Kashmir issue. However, two incidents altered status quo on Jammu and Kashmir during 1960s — the India-China War of 1962 and India-Pakistan War of 1965.

China humbled India in 1962 war and captured nearly 20 per cent area of the princely state. This area is called Aksai Chin and China denies India’s sovereignty over the cold desert region.

Further in 1963, Pakistan signed an agreement with China and handed over about 2,000 sq miles area in northern Kashmir to China, which has held all of that since then. Map of Jammu and Kashmir with demarcations for areas occupied by Pakistan and also captured by China. (Photo: Twitter/@PraveenOni)

The 1965 war saw both India and Pakistan occupying each other’s territories – India capturing over 750 sq miles while Pakistan taking over about 200 sq miles. But with Tashkent agreement, both militaries returned to their previous positions including along the Line of Control.

It was the 1971 war between India and Pakistan over the question of Bangladesh that turned the ceasefire line into the Line of Control (LoC), as it is known today. There was no LoC before 1972 Shimla Agreement was signed between India and Pakistan. This agreement also practically junked the UN resolution as the two countries agreed to resolve all disputes through bilateral talks.

The Line of Control, thus drawn, gave Pakistan control over Pakistan-occupied Kashmir and Gilgit-Baltistan, which Pakistan has since declared the Northern Areas and rules directly. Rest of the Jammu and Kashmir minus Aksai Chin is situated on the Indian side of Line of Control.

The Line of Control changed further in 1984 to thwart Pakistan’s surreptitious design to capture Siachen glacier. Siachen glacier came in the focus of the Pakistan Army in 1970s, following the massive defeat in 1971 war.

An Indian colonel Narendra Kumar is said to have read in an international mountaineering magazine about Pakistan’s attempt over Siachen glacier. This prompted him to lead a team to Siachen glacier in 1981. His team scaled several peaks in the area and reached up to Indira Col (not named after Indira Gandhi).

Col is a pass in high mountains. The Indira Col was named so by an American geographer in 1912 (Indira Gandhi was born in 1917) after one of the names of Goddess Lakshami. 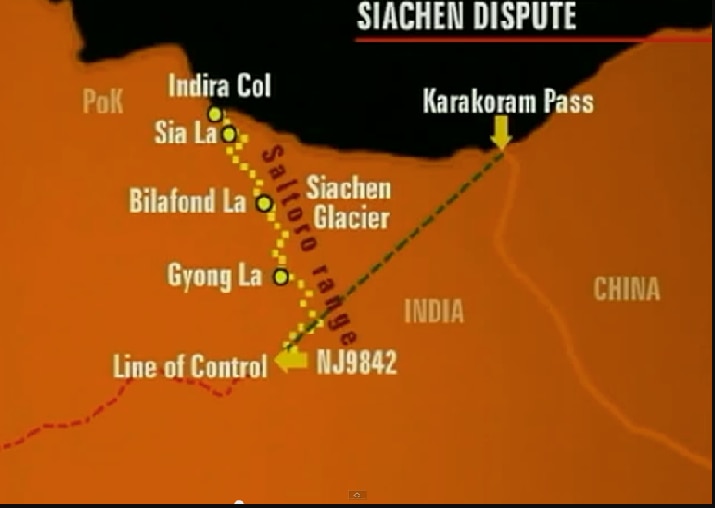 Pakistanis got to know about this Indian expedition to Siachen glacier a little later when they found a crumbled packet of made-in-India cigarette. They went about their plan to capture Siachen aggressively now and ordered a full range of mountaineering gear from a London-based firm, which was a supplier to Indian Army.

The information leaked to India and the Indian Army launched Operation Meghdoot to turn Siachen into as one of its bases. Siachen is the largest glacier in trans-Himalayan region. It is a triangular bloc of 76 km length.

Pakistan claims that Siachen glacier belongs to the part of Jammu and Kashmir given to its control under the ceasefire line (Karachi 1949) and the Line of Control (Shimla 1972) agreements. Accordingly, the Line of Control should run from NJ9842 to northward till Karakoram Pass, the meeting point of India’s boundary with China.

However, the Indian argument has been that the crestline beyond NJ9842 follows a northwest direction and ends with Indira Col of Siachen glacier. Indira Col is the area where territories of Jammu and Kashmir meet the lands occupied (1947) by Pakistan and gifted (1963) to China.

The existing Line of Control runs from Manawar in Jammu to Indira Col on the tri-junction in Karakoram mountain range. The Indian and Pakistani troops have to maintain a no-man’s land of 500 yards on each side of the Line of Control.

4 thoughts on “Kashmir: How Line of Control has changed in 70 years”