(ONE OF THE THINGS THAT I FIND HYPOCRITICAL ABOUT OUR COWARD IN CHIEF IS WHEN HE TALKS TRASH ABOUT BALTIMORE IS THE VERY WELL KNOWN FACT THAT FOR MANY DECADES NOW THE CITY OF NEW YORK THAT HE SEEMS TO LOVE SO MUCH HAS MANY MORE RATS THAN IT DOES HUMAN BEINGS. THIS IS WITHOUT TAKING INTO ACCOUNT THE TWO LEGGED RAT PACK ALSO KNOWN AS THE TRUMP FAMILY TREE WHICH IS ROTTED THROUGH ITS ROOTS.)oped: oldpoet56)

(CNN)Baltimore did not take President Donald Trump’s recent attack of the city lying down. Instead, Charm City was quick to stand up and fight back.

Trump lashed out at another prominent African American lawmaker on Saturday, tweeting that his Baltimore district is a “disgusting, rat and rodent infested mess.”
The President’s tirade was directed at House Oversight Committee Chairman Elijah Cummings, who represents Maryland’s 7th Congressional District in the House and recently lambasted conditions at the border. Trump’s attack against Cummings was the latest verbal assault against a minority member of Congress who is a frequent critic of the President. 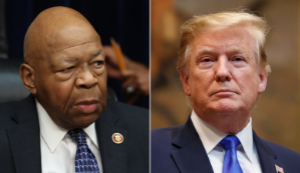 Trump attacks another African American lawmaker, and calls Baltimore a ‘disgusting, rat and rodent infested mess’
The President suggested that conditions in Cummings’ district, which is majority black and includes parts of Baltimore, are “FAR WORSE and more dangerous” than those at the US-Mexico border and called it a “very dangerous & filthy place.”
Cummings, the city’s leaders and residents were quick to defend Baltimore. The Twitter hashtag #wearebaltimore was trending Saturday night, with users posting pictures and comments expressing their pride in the city.
“Mr. President, I go home to my district daily,” Cummings wrote on Twitter Saturday in response. “Each morning, I wake up, and I go and fight for my neighbors. It is my constitutional duty to conduct oversight of the Executive Branch. But, it is my moral duty to fight for my constituents.”
Baltimore’s Mayor Jack Young also took the attack to heart, criticizing Trump for disparaging a “vibrant American City.”
“It’s completely unacceptable for the political leader of our country to denigrate a vibrant American City like Baltimore, and to viciously attack U.S. Representative Elijah Cummings a patriot and a hero,” Young tweeted.
View image on Twitter 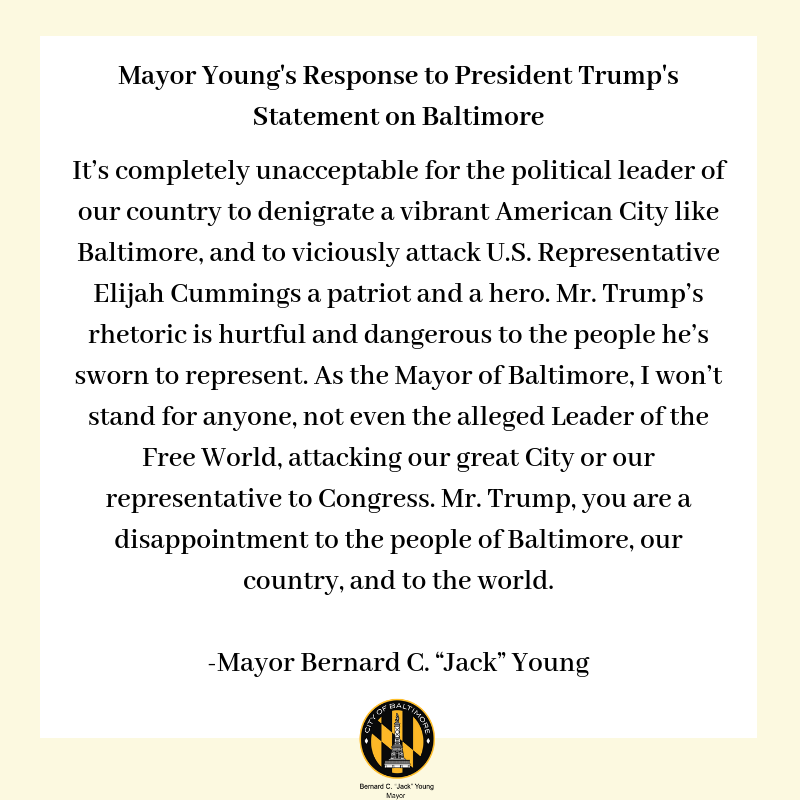 It’s completely unacceptable for the political leader of our country to denigrate a vibrant American City like Baltimore, and to viciously attack U.S. Representative Elijah Cummings a patriot and a hero.

2,724 people are talking about this
Twitter Ads info and privacy
The Baltimore Sun’s editorial board published a response, highlighting aspects of the city they felt the president left out: the beauty of Inner Harbor, the history of Fort McHenry, the prominence of Johns Hopkins Hospital, and the national dependency on the Social Security Administration, which is housed in the city.
“And it surely wasn’t about the economic standing of a district where the median income is actually above the national average,” the board wrote.
“Better to have some vermin living in your neighborhood than to be one.”
Other Democrats came to Baltimore’s defense on Saturday, including California Sen. Kamala Harris, whose national 2020 presidential campaign headquarters is located there.
“Baltimore has become home to my team and it’s disgraceful the president has chosen to start his morning disparaging this great American city,” Harris wrote on Twitter.

Others called out the city’s character: “There’s a block party today on my southside street. This is a city of good Americans who deserve more than a grifting, hollow and self-absorbed failure of a man as their president,” tweeted author David Simon.
And while they defended their city, some had criticisms for Trump.

Mayor Jack Young, the President of the City Council and other elected officials hold news conference to denounce President Trump’s statements on Baltimore this morning. https://twitter.com/i/broadcasts/1YqKDBeqXyAJV …

“It should be beneath the dignity of the President of the United States, the person who is supposed to be the leader of the free world, to disparage and personally attack a great American city and another great American leader,” Baltimore City Council President Brandon Scott told reporters Saturday. “Instead of up upholding his oath of office to put the greater good of all American citizens, no matter where they live and who they voted for above all else, that he decided to do the opposite.”
Many of the elected officials who spoke out praised Cummings, who grew up in Baltimore, for his help in the recent developments the district has undertaken, though they acknowledge there is still more work to do.
“We stand ready and willing to work with the President, if he is willing to go beyond tweets, to help us solve some of the problems that are deep enrooting in Baltimore’s history,” Scott said.