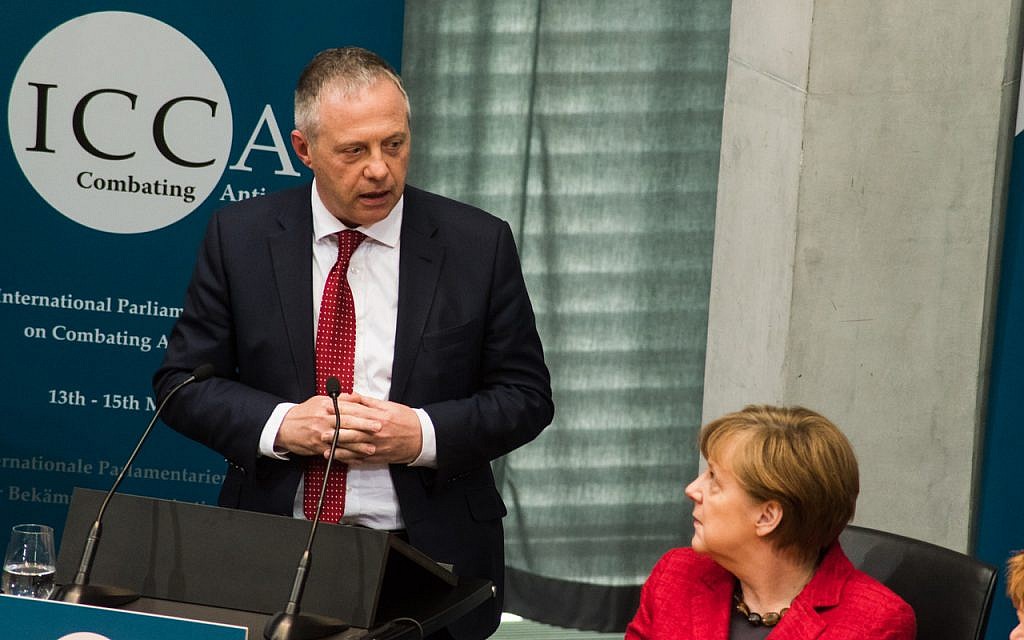 LONDON —  According to British Labour MP John Mann, “when it comes to fighting anti-Semitism, it’s not enough for us to stand shoulder-to-shoulder with the Jewish community, when the anti-Semites are throwing the stones of hatred, of bitterness, of bile.”

“We have to stand in front of [Jews] in this fight. This must not be only the responsibility of the Jewish community,” he said.

On Tuesday July 23, in one of her very last acts as prime minister, Theresa May appointed Mann as the government’s adviser on anti-Semitism. He joins Lord Tariq Ahmad as adviser on freedom of religion and belief, and Lord Eric Pickles as the special envoy on post-Holocaust issues. All three of the posts are performed pro-bono.

Mann, a tall, fit and burly politician with a well-founded reputation for plain speaking, knows what he is talking about. For the last 15 years he has headed the All-Party Parliamentary Group (APPG) against anti-Semitism, stepping down from his chairmanship only this week.

He co-founded, with Canada’s former Justice Minister Irwin Cotler, the International Coalition for Combating Antisemitism. Both bodies have consistently produced deeply researched reports into the nature and level of anti-Semitism, making recommendations to governments.

Perhaps the single act which brought him to national consciousness was his 2016 confrontation with former London mayor Ken Livingstone, who had just claimed on a radio program that Adolf Hitler was initially a supporter of Zionism. Not mincing his words, Mann rounded on Livingstone in a building crammed with TV cameras, calling him “a Nazi apologist.” It put him definitively out of kilter with many colleagues in Labour leader Jeremy Corbyn’s inner circle, but Mann did not care.

In his office — a more spacious part of the parliamentary estate than many backbench MPs enjoy — Mann is relaxed and confident as he talks to The Times of Israel about the background to his appointment, a newly-created role which he hopes the new prime minister, Boris Johnson, will continue.

But how is that Mann, 59, whose northern mining constituency of Bassetlaw is almost certainly home to few or no Jews, became such a vehement defender of the Jewish community?

The answer, as Mann himself told a Community Security Trust (CST) dinner in February, lies in his own family background. He is Labour through and through, a child of Labour activist parents, and even met his wife through the Labour Party. 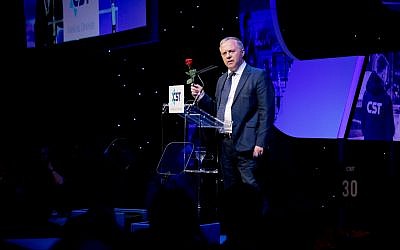 But it was the actions of his great-grandparents which set the scene for the Mann family.

Mann, who has been an MP since 2001, is still paying it forward in what he feels is a matter of moral principle.

“You cannot imagine how much hurt, how much shame, how much anger we have in what is defiling what has been not just my life, but my family’s existence. And many families’ existence down the generations,” said Mann. “That’s what’s at stake here. We’re not going to give in. We’re not going to hand over to these anti-Semites and those that stand by and encourage them and are silent.” 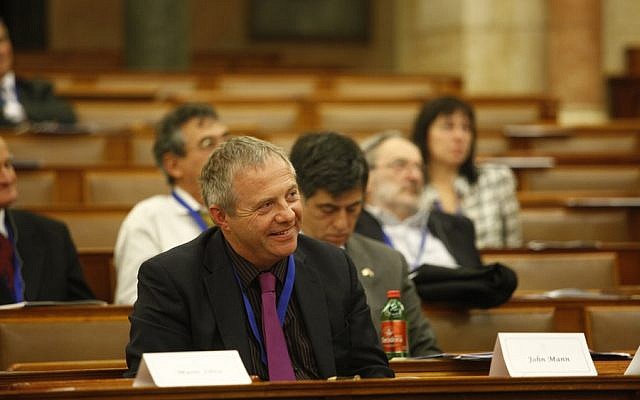 For 15 years as chair of the APPG against anti-Semitism, Mann has been warning of the evils of Jew-hatred, which he describes as “the worst of racisms.” The genesis of his new role, he says, sprouts from a series of discussions that Jewish community leaders had with Downing Street.

“They wanted some sort of liaison person between the community and government,” said Mann.

In Germany the role is filled by a civil servant, while US President Donald Trump has just appointed a new special envoy, Elan Carr. Downing Street, says Mann, responded to the request from the British Jewish community and asked him to take up the post.

Though nominally the new job is a “point of contact between the Jewish community and government,” Mann is likely to step it up a notch. He is keen on practical consequences and points to the generous government provision of security finance for Jewish community institutions — including Jewish schools — as a direct result of the work and recommendations made by the parliamentary committee which he chaired. The new job, which is open-ended, will, he hopes, result in even more practical actions. 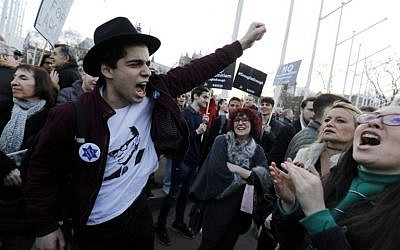 Members of the Jewish community hold a protest against Britain’s opposition Labour party leader Jeremy Corbyn and anti-Semitism in the Labour party, outside the British Houses of Parliament in central London on March 26, 2018. (AFP PHOTO / Tolga AKMEN)

His first target will be Jewish teenagers in the 16-19 age bracket.

“I have one overriding objective, and this I will say to the government: that Jewish teenagers feel secure and safe living here, that there is no impingement on their ability to be themselves and want to do well in this country, and to remain in this country, positively,” said Mann. “That’s the objective. But I don’t believe at the moment that it is the case.”

Jewish teens, says Mann, should be able to feel that they can prosper — not necessarily financially, but socially and culturally.

“A top priority will be to find out if my feeling on that is in fact accurate. So my first big piece of work will be to go and talk to those 16- to 19-year-olds, to get their perspective on how they see their position in our society,” he said.

Such information, he believes, “will be absolutely pivotal” in framing what advice he will subsequently give to the government.

“If the teens tell me they don’t feel safe here, that is a problem,” he said.

In 2006, says Mann, the APPG identified three strands of anti-Semitism: “traditional right anti-Semitism, which was just as virulent, despite all the education that’s been around — and that remains the case today. So the far right remains a problem for the Jewish community, and young Jews — from neo-fascists to terrorism.”

“Then there was Muslim anti-Semitism,” he continued, “which the committee said had not been a problem in the past because there were very few Muslims in Britain.

“Now there is a significant presence and therefore Muslim anti-Semitism is a bigger problem — and that is a fact. We have seen Islamists committing murderous attacks on Jewish communities in France, Belgium, Austria, Copenhagen…” he said.

Such attacks have not so far taken place in Britain, observed Mann, “because in my view the UK is better prepared, through the work of the CST — and I’m proud that our committee [the APPG] has played an important role in strengthening governmental support for the Jewish community.” 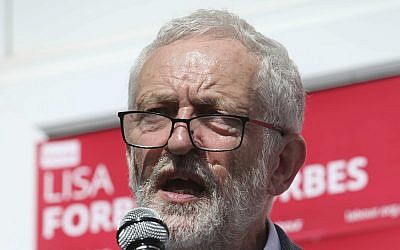 The third serious problem, identified in 2006, was far left anti-Semitism, thought dormant but now once again on the rise. Mann, no friend of Corbyn, says the Labour leader is the catalyst for some of the Jewish race hate, but warns that if Corbyn disappeared tomorrow, much of the anti-Semitism would still remain.

To his great anger and disappointment, Mann has seen and charted an overlap between the three strands of anti-Semitism, with alt-right and far left groups using the same imagery, sometimes joined by Islamists. On some occasions, he says, it’s impossible to tell which of the three strands is driving the abuse.

“I’m not Jewish, but it hasn’t stopped people throwing vile anti-Semitic stuff at me, including violent threats. And some of the worst stuff, where police have been involved, I have no idea whether it is emanating from the right, the left, or Islamists,” he said. 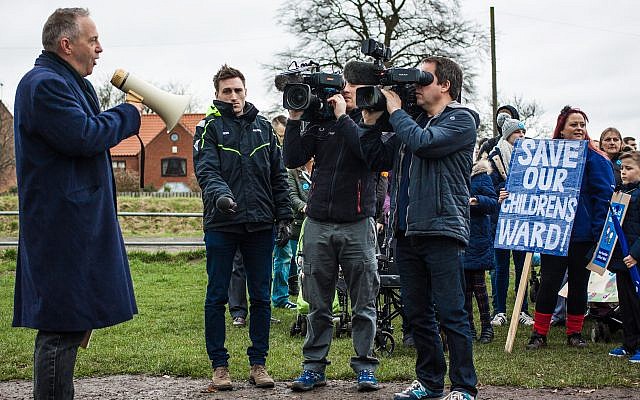 Labour MP John Mann addresses press, speaking out on behalf of the children’s hospital ward in his constituency of Bassetlaw. (Courtesy)

Mann says that the increased use of the internet and social media is one of the biggest things to have exacerbated anti-Semitism, and warns that both the Jewish community and government must become a lot smarter and more savvy in dealing with online abuse.

As he takes up his new role, of one thing he is sure: “I represent a community that was comprised of coal miners. Coal miners who, when this country needed it, spent their lives underground digging coal. And what the coal miners in the colleries in my area did to warn against the impending doom was to take a small bird in a cage down the pit with them. A yellow canary,” he said.

“The Jewish community is the canary in the coal mine for humanity and for the safety and future of my grandchildren,” said Mann. “That’s why we have, whether we like it or not, no choice.”