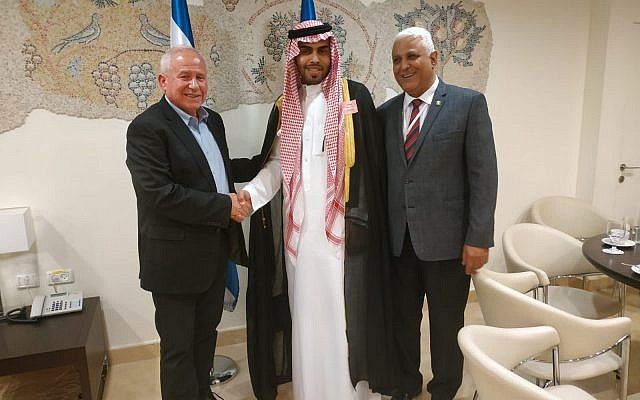 Several prominent Gulf media personalities backed criticism of Israel-friendly Saudi blogger Mohammed Saud, who was heckled and attacked by Palestinians during a visit to Jerusalem’s Old City on Monday.

Others however, pushed back against the tone of the bitter harassment the Saudi social media personality was subjected to during a tour of the Temple Mount, specifically the criticism against the Saudi royal family.

Saud, an outspoken supporter of Israel and Prime Minister Benjamin Netanyahu, arrived in Israel earlier this week at the invitation of the Foreign Ministry along with five other media personalities from the Arab world.

The Saudi blogger was harassed and attacked by a group of Palestinians on Monday as he was touring Jerusalem’s the Old City, including the Al-Aqsa Mosque. Video of the incident showed people throwing chairs and bottles at him, spitting at him and calling him an “animal,” “trash” and “cheap.”

Jaber al-Harmi, the editor-in-chief of Al-Sharq, a Qatari daily, accused Saud of sullying the Al-Aqsa Mosque, a site also known as the Temple Mount.

“The Arabs went to Jerusalem–not as conquerors but rather as normalizers. A media delegation, including [from] Saudi Arabia, the country of the two holy mosques, arrived at the invitation of the Israeli entity,” Harmi tweeted on Tuesday beside a video featuring Saud’s visit to Al-Aqsa. “A Saudi tried to defile the Al-Aqsa Mosque, but the protectors and youth of Palestine were on the lookout.”

Ali al-Ghofaily, a Saudi journalist who works as a presenter and producer for the major television broadcaster in the Arab world MBC, attempted to cast doubt on Saud’s national identity and accused him of breaking Saudi laws.

“This [man] is not Saudi. If he is Saudi, he only represents himself because he violated state laws. If he returns to the kingdom, he deserves to be punished,” Ghofaily tweeted on Monday beside an attached photo of the Saudi blogger in Israel. “The wave of Saudi condemnations [of Saud] proves that the Palestinian cause is our cause and that the Al-Aqsa Mosque is the solely the right of Muslims. There is always an exception to the rule!”

Israeli officials have condemned the attack on Saud and fervently supported his visit to the Jewish state.

“We strongly condemn the cruel and immoral behavior of some Palestinians near the Al-Aqsa Mosque toward a Saudi media personality who came to Jerusalem to be a bridge to peace and understanding between peoples,” Foreign Ministry spokesman Nizar Amer wrote on Twitter on Monday.

Saud, who speaks some Hebrew, has said he hopes for normalization between Israel and Saudi Arabia. The username on his Twitter feed is written in Hebrew as well as in Arabic, and his description includes an Israeli flag emoji and the words “Only Bibi!” using Netanyahu’s nickname.

Some Gulf personalities lashed out at the Palestinians at Al-Aqsa who made disparaging comments of Saudi Arabia’s rulers while harassing Saud. 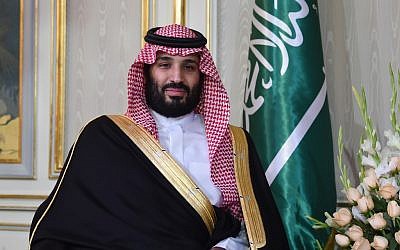 In this photo from November 27, 2018, Saudi Arabia’s Crown Prince Mohammed bin Salman is pictured while meeting with the Tunisian president at the presidential palace in Carthage, on the eastern outskirts of the capital Tunis. (Fethi Belaid/AFP)

“It is shameful to shove Saudi Arabia into this theater. It is shameful to hear the variety of curses and insults against our leaders. Are you not embarrassed? Are you not ashamed of yourselves,” Mohammed Nafaa, a widely followed Saudi commentator, tweeted on Monday, adding that “even if a Saudi individual prayed in the Al-Aqsa Mosque, does that amount to normalization[?]”

In the video of Saud at Al-Aqsa, a man is heard calling Saudi Crown Prince Mohammed bin Salman a “collaborator.” Another person is heard telling Saud “to go normalize” with Israel alongside the Saudi royal family.

Saudi Arabia and Israel do not have diplomatic ties. However, they have found common cause in their opposition to Iran, including its support for armed groups in the Middle East.

Abdel Rahman al-Lahem, a Saudi commentator who has appeared on talks shows, suggested he could not understand how Palestinians would insult Saudi Arabia, which has long provided them with substantial financial aid.

“I am amazed. It is my right to be amazed: How do those people raise their children with this foulness of language? How have the planted in their minds such black hatred and despise of a country that has dealt with their hunger, spent money on their institutions and supported their cause,” he tweeted on Tuesday.

He tweeted on Monday: “Regardless of whether he is Saudi or not..The video shows how much some Palestinians despise Saudis..This video does not bring us shame but rather brings them shame because it is an admission that their hate and rejection of us is greater than that of the Israelis.”