A pro-Trump Republican candidate for Congress who is aiming to unseat Ilhan Omar in Minnesota has been charged with a felony after allegedly stealing from stores. 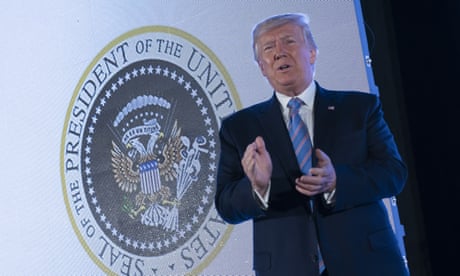 Danielle Stella was arrested twice this year in Minneapolis suburbs over allegations that she shoplifted items worth more than $2,300 from a Target and goods valued at $40 from a grocery store. She said she denied the allegations.

Stella, a 31-year-old special education teacher, was reported this week to be a supporter of the baseless “QAnon” conspiracy theory about Donald Trump battling a global cabal of elite liberal paedophiles.

This week Stella also described Minneapolis as “the crime capital of our country”. She has in the past complained that local police were “overworked and overburdened” and said that, if elected, she would work to reduce crime.

In a series of text messages, Stella said: “I am not guilty of these crimes. In this country I am innocent until proven guilty and that is the law.”

She added: “If I was guilty of crimes, I would never run for public office, putting myself in the public eye under a microscope to be attacked by all political sides.”

An attorney for Stella, Joshua London, declined to comment.

Stella is accused of stealing 279 items valued at $2,327.97 from a Target store in Edina, to the south-west of Minneapolis, on 8 January this year. She was arrested for the alleged theft after security staff called the police.

A criminal complaint filed to Hennepin county district court alleged Stella was seen leaving the store without paying for most of her haul, after “scanning only a few other items” that were valued at about $50.

The complaint said Stella told police in a statement she “remembers arriving at Target to purchase items but nothing else” due to post-traumatic stress disorder, and that she “normally she goes to Target with someone because of anxiety around people”.

Stella has said publicly that she was the victim of a severe violent assault in 2008. She is charged with the thefts under her former surname, which the Guardian agreed not to report because she said it could endanger her safety.

She is charged with felony theft over the incident at Target and faces a punishment of up to five years in prison and a fine of $10,000 if convicted, according to court filings.

Police and court records said a warrant was put out for Stella’s re-arrest for alleged contempt of court on 4 April, after she failed to show up for a court hearing.

Officers in nearby Bloomington then arrested Stella on 28 April after she was allegedly seen by security staff at a Cub Foods grocery store stealing a bottle of tick spray for cats, and placing other items “under her purse so that they could not be seen”.

When they checked her identification, police officers discovered the open warrant for Stella’s arrest over her failure to appear in court for the earlier alleged shoplifting, their incident report said.

The report said Stella was arrested for alleged misdemeanour theft for taking “cat merchandise” and cat food valued at $40.46. She was issued with a citation and given a date to appear in court. It was not clear whether authorities would pursue the contempt of court allegation.

Stella’s candidacy has attracted interest from the far-right conspiracy website InfoWars, which broadcast an interview with her this week. Stella laughed and nodded as the host, J Owen Shroyer, called Omar “a witch” and said: “Everything about her is a fraud.”

Describing Minneapolis during the interview as America’s “crime capital”, Stella falsely claimed that crime in the city had risen by 80% over the past year. According to Minneapolis police data, there has been a 10.7% uptick in serious crime year-on-year, following a 16.5% decline in 2018.

The rightwing commentator Todd Starnes promoted Stella in an interviewearlier this month on Fox News’s streaming service Fox Nation. “We certainly wish Miss Stella the very best,” Starnes said, adding that he hoped for a “significant change in representation” in Omar’s district. 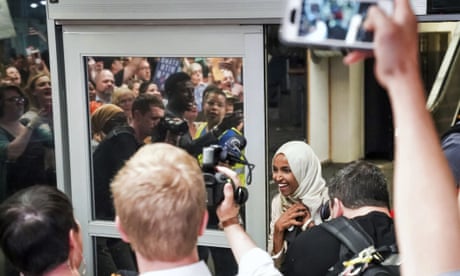 Last month Stella officially registered with the Federal Election Commission as a candidate for the Republican nomination in Minnesota’s fifth congressional district. She later spoke at the “Demand Free Speech” rally in Washington.

She has accused Omar of being a criminal for advising immigrants how to avoid agents from US Immigration and Customs Enforcement. She said in a tweet that any representatives who fail to “uphold the rule of law” should be ejected from office.

Court records say that in 2009, Stella pleaded guilty to driving while impaired from alcohol and fleeing a police officer. The latter charge was prosecuted as a felony but later classified as a gross misdemeanour as part of Stella’s plea.

If you’re reading us a little…

… or you’re reading us a lot, we hope you’ll consider supporting us with a contribution, however big or small. More people are reading and supporting The Guardian’s independent, investigative journalism than ever before. And unlike many news organisations, we have chosen an approach that allows us to keep our journalism accessible to all, regardless of where they live or what they can afford. But we need your ongoing support to keep working as we do.

The Guardian will engage with the most critical issues of our time – from the escalating climate catastrophe to widespread inequality to the influence of big tech on our lives. At a time when factual information is a necessity, we believe that each of us, around the world, deserves access to accurate reporting with integrity at its heart.

Our editorial independence means we set our own agenda and voice our own opinions. Guardian journalism is free from commercial and political bias and not influenced by billionaire owners or shareholders. This means we can give a voice to those less heard, explore where others turn away, and rigorously challenge those in power.

We need your support to keep delivering quality journalism, to maintain our openness and to protect our precious independence. Every reader contribution, big or small, is so valuable. Support The Guardian from as little as $1 – and it only takes a minute. Thank you.