(THIS ARTICLE IS COURTESY OF VANITY FAIR)

If the Mueller probe taught the world one thing, it’s that anyone professionally associated with Rudy Giuliani should demand a clause in his contract barring him from speaking publicly on their behalf. Last year, for example, in a series of interviews that made his unhinged rant against ferrets look sane, Giuliani suggested that Donald Trump fired James Comey in order to obstruct his investigations; that the president had colluded with Russia but that doing so wasn’t a crime; and that attorneys at his law firm regularly took it upon themselves to pay off porn stars alleging affairs with their clients—to say nothing of cringeworthy fantasies he offered up about riding to Ivanka Trump’s rescue. Now that the Russia matter has mostly concluded—save for testimony by Robert Mueller that could potentially change the impeachment calculus—Giuliani has been forced to find new ways to stick both feet in his mouth. On Monday, he found one!

Appearing on Hill.TV, the former New York City mayor told the hosts of “Rising” that the fallout from the Jeffrey Epstein sex trafficking case is “obviously going to implicate a lot of people—I can’t tell you who but it’s not going to end up with just Jeffrey Epstein.“ While that is certainly the consensus—reporter Nick Bryant, who obtained Epstein’s “black book,” said in an interview with Vanity Fair that the scandal will “go all the way up to Mount Olympus”—one person you could say is definitely implicated in the scandal is Giuliani’s own client, Donald Trump. The same Donald Trump who hosted a “calendar girl” party at Mar-a-Lago in 1992, the guest list for which consisted of him, Epstein, and “28 girls.” It is also the same Donald Trump who was videotaped dancing and joking with Epstein at another party at Mar-a-Lago, surrounded by young cheerleaders for the Buffalo Bills and Miami Dolphins. In fact, Trump remained on extremely friendly terms with Epstein for at least another decade, telling New York in 2002 that Epstein was a “terrific guy” and “a lot of fun to be with,” adding, “It is even said that he likes beautiful women as much as I do, and many of them are on the younger side.” Six years later, Epstein would be convicted of sex crimes by a Florida state court. 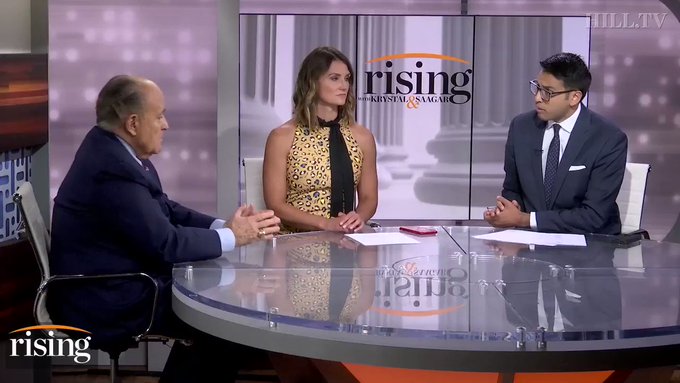 Yet, weirdly, Giuliani did not mention Trump while discussing the powerful people likely to go down as a result of the new charges against Epstein, which the “financier” has denied. Nor did he mention fellow Trump defender and longtime Epstein pal Alan Dershowitz, who’s denied ever taking part in Epstein’s underage sex ring. (“I got one massage!” Dershowitz told my colleague Gabriel Sherman. “It was from a 50-year-old Russian woman named Olga. And I kept my shorts on. I didn’t even like it. I’m not a massage guy.”)

Elsewhere in the Hill.TV interview, ole Rudes contended that anyone who spent a considerable amount of time with Epstein—like, say, Trump—more than likely knew that crimes were being committed. “If you spent this much time with him and he was so involved with these underaged girls—who did you see him with and what was he doing and what did he tell you and what did he say to you and how could you have missed it,” he said. “Maybe some were innocent—maybe some weren’t, but I think they’re going to investigate everybody.”

In related news, the Daily Mail reported Monday that shortly after serving out his extremely light prison sentence on prostitution charges—during which he allegedly continued to engage in “improper sexual contact,” claims his lawyer denies—Epstein partied with a veritable who’s who of Trump administration employees and friends, including Treasury Secretary Steven Mnuchin, Commerce Secretary Wilbur Ross, and…Rudy Giuliani.