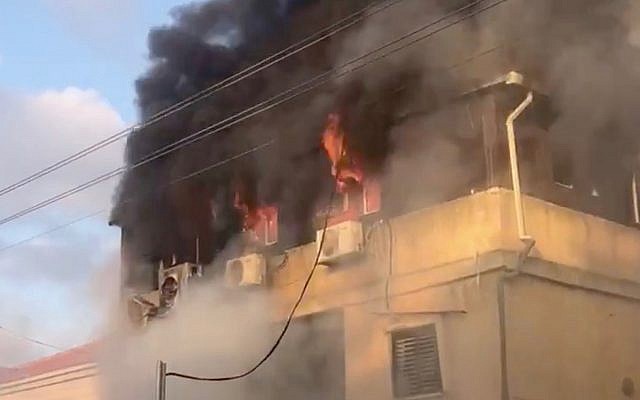 A fire burns at the home of Carmel Mouda in the central city of Rosh Ha’ayin on July 6, 2019. (Screen capture: Twitter)

Authorities were investigating a fire that broke out Saturday at the home of a daycare manager who has been filmed abusing small children as suspected arson.

Carmel Mouda house’s was damaged by the blaze in the central city of Rosh Ha’ayin, as were several nearby homes. There were no reports of injuries.

Firefighters were able to extinguish the flames as investigators arrived to determine what started the fire, which began when Mouda was at home with her family.

Investigators said Saturday afternoon they believe the blaze started in a storage area of the building. 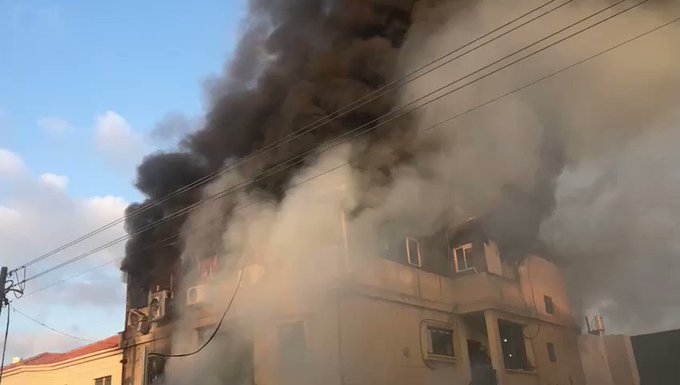 The home is also the site of the private Baby Love daycare center, where the alleged abuse took place.

“We understand the pain and anger of the parents but a red line was crossed. People took the law into their own hands, acting thuggish and endangering lives,” Mouda’s lawyer Guy Ein-Zvi said in a statement.

“Carmela’s trial should be held in court and not the town square,” he added.

A protest organized by parents against Mouda scheduled for Saturday evening was called off after the fire. A lawyer representing the parents denied they were involved.

“The parents of the children are angry and shocked over the grave crimes that were carried out, but are not criminals and I have no doubt that a thorough investigation will conclude they have no connection to the fire,” lawyer Benjamin Malka told Hebrew media. 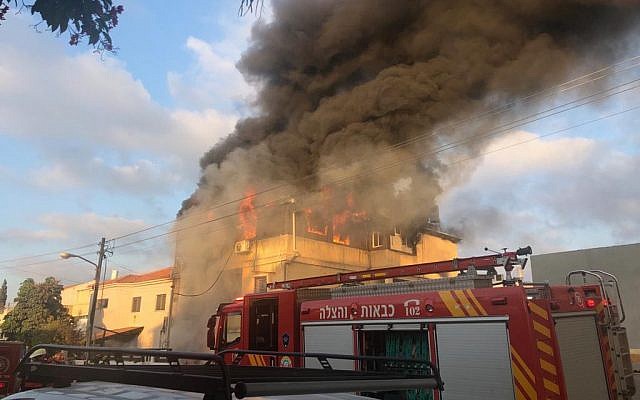 Firefighters work to extinguish blaze at the home of Carmel Mouda in the central city of Rosh Ha’ayin on July 6, 2019. (Israel Police)

“Everyone is taking the law into their own hands,” a woman told the Kan public broadcaster. “In another 30 seconds my granddaughters and I would’ve gone up in flames.”

The fire came after police released graphic security camera footage on Thursday showing Mouda tying up children, force-feeding them, smothering toddlers who refuse to fall asleep with blankets and physically abusing them.

Mouda, 25, was arrested three weeks ago. The children in her care were aged three months to three years.

“I’m in shock,” a parent told Channel 13 news. “My son is in almost every video tied to a chair or [tied up] on the floor, and this isn’t even everything. The police showed me even worse videos.”

Sgt. Fraidi Kamenetsky said the police plan to file charges against Mouda with a request she be held in custody until the end of the proceedings. During an interrogation, an unnamed assistant was also arrested on suspicion that she witnessed the abuse and may have also resorted to violence.

Meanwhile, protests are planned for Sunday at six locations around the country, including the Prime Minister’s Residence in Jerusalem. Parents are demanding changes to childcare oversight laws, including tougher sentences for abusive daycare workers and better regulations for supervision of daycare centers.

Ahaz Agam, chairman of the National Parks Parents’ Committee and one of the protest organizers, told Channel 13 that parents feel the government is wasting time while more cases of abuse by child care workers come to light.

In recent years numerous cases of abuse have been reported including the killing of an 18-month old baby girl by a caretaker.

In June of 2018 the government came under fire for the continued delay of a proposed supervision law as ministries squabbled over funding the project. The law was finally passed in December, but only mandates security cameras in all daycare centers starting in September 2020, as long as 70 percent of the parents do not object.