MANAMA, Bahrain — Businessmen, reporters, five rabbis and a senior White House official held rare morning prayers at the only officially declared synagogue in the Gulf Wednesday, on the edges of a peace conference being held in the tiny gulf kingdom that was once home to a thriving Jewish community.

At the end of the service, which took place on the sidelines of the US administration’s economic peace workshop held in Bahraini capital Manama, the men, clad in prayer shawls and phylacteries, broke out in song, walking around the bimah and singing “Am Yisrael Chai” — the people of Israel live.

The rare service was organized by this Times of Israel correspondent, with the help of Bahraini diplomat Houda Nonoo, who is Jewish, and the approval of authorities in Manama.

Rabbi Marvin Hier of the Simon Wiesenthal Center led prayers. After the service, one of the worshipers gave a sermon about the weekly Torah reading.

Prayers are not held on a regular basis at the synagogue, and are usually even closed for holidays and opened only for special occasions. The building housing the synagogue is unmarked. 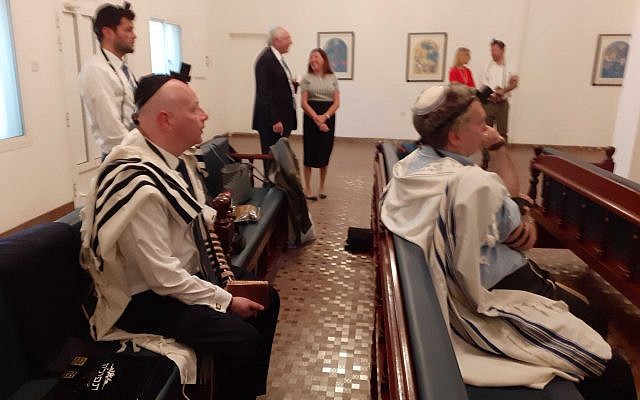 Greenblatt wrote on Twitter that he prayed for his family and for peace. “This is an example of the future we can all build together,” he wrote.

A special opportunity to daven(pray) this morning with a minyan(quorum) in a synagogue in Bahrain. Great way to start today. I was asked what I prayed for- two things: my family, who I miss deeply and of course for peace. This is an example of the future we can all build together

“That’s the secret of the Jewish people — whenever you step into a shul, wherever you are in the world, you feel like home,” said Rabbi Abraham Cooper, also from the Wiesenthal Center.

The Manama synagogue was built in the 1930s. It was ransacked in 1947 in the wake of the United Nations Partition Plan that called for the creation of both a Jewish and a Palestinian state within British Mandatory Palestine. 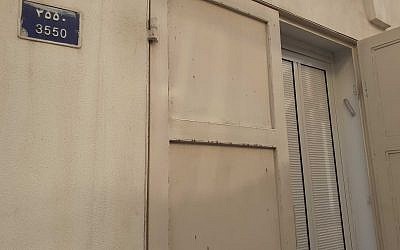 The unmarked entrance to the synagogue in Manama, Bahrain, June 26, 2019 (Raphael Ahren/Times of Israel)

Nonoo, who served as Bahrain’s US ambassador a decade ago, and arranged for the synagogue to be opened on Wednesday, said that the prayer service was an emotional occasion for her.

“I was very moved. It’s a historic moment. For the first time in my life, I saw a prayer service with a minyan in my synagogue,” Nonoo told The Times of Israel, using the Hebrew term for the quorum of 10 men required for a full Jewish service.

The synagogue, located on Manama’s Sasaah Avenue, was renovated in 1997 and counts 34 members in its community. Prior to 1947, at its peak the community counted 1,500 Jews, mainly of Iraqi origin.

A shofar in the synagogue in Manama, Bahrain, June 26, 2019 (Raphael Ahren/Times of Israel)

“I was very moved by the united sense of Jews from all over, getting together in a synagogue that hasn’t had a minyan in close to 75 years, and singing together Am yisrael Chai,” said Canadian businessman Mayer Gniwish, who is also a rabbi.

Bahrain has the only indigenous Jewish community in the Gulf, though Jewish businessmen, mainly from the US, frequent the region in increasing numbers.

Ten years ago, the Dubai Synagogue began operating as the sole institution of the Jewish community of the Emirates, welcoming veteran and temporary residents, as well as those on visits for business and pleasure.

The Trump administration kicked off its Israeli-Palestinian peace bid in Manama Tuesday, hoping to drum up billions of dollars to support a vision of a thriving Palestinian economy should a peace deal be reached.

The White House invited no Israeli officials, but Israeli members of the press, businessmen and civil society representatives are in attendance.