(oped: the immaturity levels of so many Islamic men is beyond ridiculous) 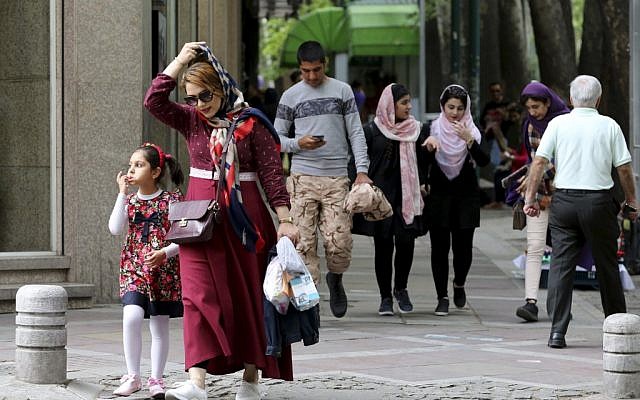 Iranians walk along Valiasr Street in northern Tehran on May 8, 2019. (Atta Kenare/AFP)

Iran’s hardline judiciary has reportedly been cracking down on what the regime considers religious and moral crimes in public spaces.

Iranians have been warned they will face punishment and prosecution for violating the Ramadan fast by eating in public, or for flouting the regime’s gender-based modesty rules, the British daily The Telegraph reported Saturday.

“My personal advice to women is to respect the hijab even more than before and gentlemen must avoid looking directly at female passersby,” the report quoted Gholam-Hossein Esmaili, a judiciary spokesperson, as saying.

He added: “Anyone ignoring these instructions during the Ramadan will be committing an offense and should expect some punishment from the law enforcement units.”

Anyone caught playing music on car radios will be fined and have their car towed, officials also said.

The report linked the draconian crackdown to the regime’s fears of public criticism and protests amid growing economic and diplomatic uncertainty as its diplomatic row with the US has ratcheted up in recent months.