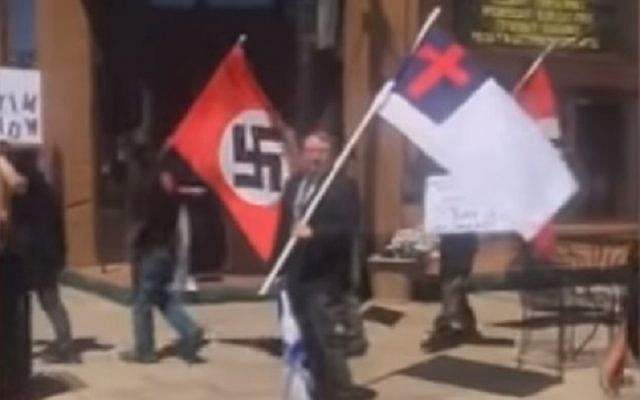 A Holocaust Remembrance Day event in Russellville, Arkansas, Sunday was interrupted by protesters bearing anti-Semitic signs, including one that read “The Holocaust didn’t happen, but it should have.”

Bearing crosses, a large portrait of Jesus and Christian and Nazi flags, the protester’s anti-Semitic signs also included one reading “YHWH has the oven preheated.”

Joyce Griffis, who organized the event, told KSFM that the demonstrators “were talking to us like we were pieces of nothing.”

Among those at the event were Sir Beryl Wolfson, 96, who shared his story of witnessing the liberation of Holocaust concentration camps while wearing a World War II Veteran cap and Star of David belt buckle.

The son and grandson of Klansmen, Roper is “a nonsectarian hater” affiliated with many white nationalist groups, according to the Southern Poverty Law Center.

In April, the ADL criticized Arkansas Tech University for naming a scholarship in honor of Dr. Michael Link, whom the ADL wrote “repeatedly espoused Holocaust denial and anti-Semitism to his students and in his writing.”

Arkansas Tech said it has found no evidence of these claims.