(THIS ARTICLE IS COURTESY OF SHANGHAI CHINA’S ‘SHINE’ NEWSPAPER) 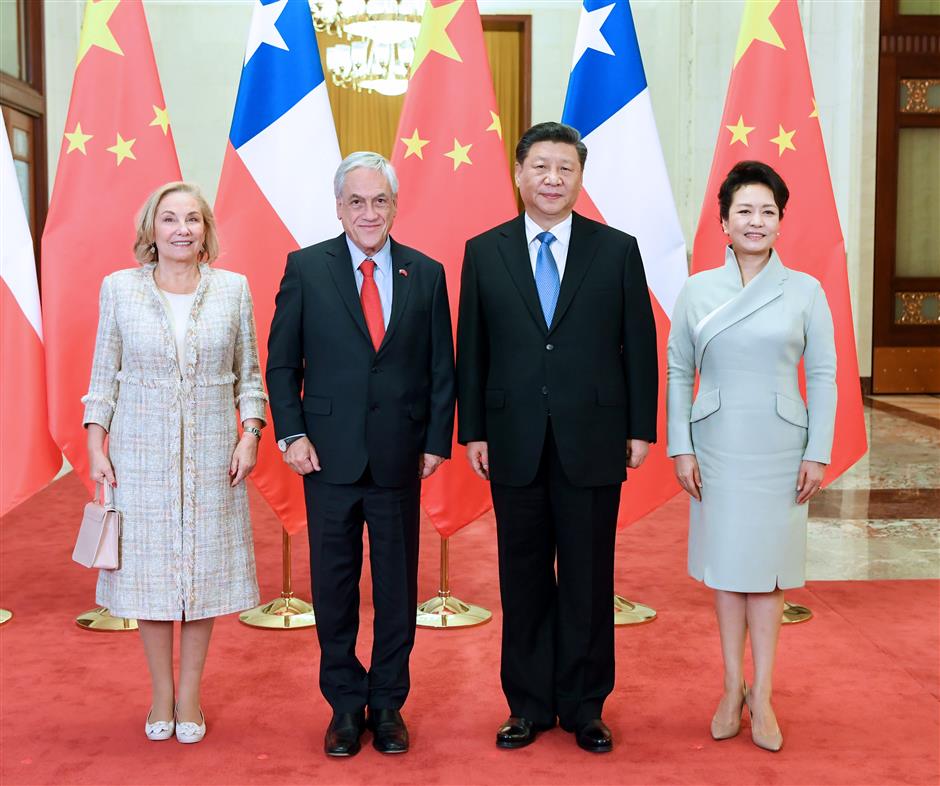 Chinese President Xi Jinping and his wife, Peng Liyuan, with Chilean President Sebastian Pinera and his wife, Cecilia Morel, in Beijing yesterday. Xi and Pinera met ahead of the second Belt and Road Forum for International Cooperation, which is due to start in the capital today.

Amid a surging trend toward global interconnectivity propelled by the China-proposed Belt and Road Initiative, noises pop up from time to time as to how this grand vision may have its bearing on the world.

The Belt and Road, referring to the Silk Road Economic Belt and the 21st Century Maritime Silk Road initiated by Chinese President Xi Jinping in 2013, aims to build trade and infrastructure networks connecting Asia with Europe and Africa and beyond the ancient Silk Road routes.

Eying high-quality cooperation in boosting common prosperity, the Second Belt and Road Forum for International Cooperation is due to be held from today to April 27 in Beijing. Some 5,000 participants from more than 150 countries and 90 international organizations have confirmed their attendance.

Facts have come to show that the BRI is a peaceful, open and green road of win-win cooperation, as well as a revitalized historical route leading to a community with a shared future for humanity.

“Debt trap diplomacy” has been a big buy for those with Cold War mindset, demonizing China’s loans as “creating economic dependency on Beijing.”

Facts show, however, that the BRI is helping lift countries out of a “trap of no development” rather than duping them into a “debt trap.”

To start with, developing countries in the stage of economic take-off, especially those in Asia and Africa, are in urgent need of capital for infrastructure investment. What China has done is to extend a helping hand to such programs, based on the principle of “mutual respect, justice and fairness, and win-win results.”

In terms of project selection as well as investment and financing cooperation under the BRI, all concerned parties will make decisions prudently after joint consultation, risk assessment and feasibility studies.

“For those with difficulty in debt repayment, China seeks proper settlement via friendly consultation, and never coerces them into repaying the debt,” said Yang Jiechi, director of the Office of the Foreign Affairs Commission of the Communist Party of China Central Committee.

A further look at a country-specific debt portfolio reveals the lack of fairness of the debt-trap rhetoric.

For instance, Sarmad Ali, managing director of Jang Media Group, the largest media group in Pakistan, said that the debt incurred by the China-Pakistan Economic Corridor, the framework of regional connectivity under BRI cooperation, accounts for only around 6 percent of Pakistan’s total external debt and liabilities.

CPEC is not only a drive for development, but also injects huge amounts of capital into Pakistan, he added.

Some Western critics tend to blast China for “intentionally creating” the debt problem of Sri Lanka’s Hambantota port and its handover, but such allegations are no more than a fabrication out of thin air.