The World Jewish Congress on Friday urged European governments and lawmakers to take measures against a series of planned neo-Nazi gatherings over the weekend to mark Adolf Hitler’s birthday.

The WJC statement said group events to commemorate 130 years since the birth of the Nazi leader (on April 20, 1889) were scheduled across the continent, including a two-day conference by a fascist group in Bulgarian capital Sofia, a hiking and picnic trip in Ukraine, a rock concert in Italy, two conventions in Germany and a handful of gatherings in France.

The group invited lawmakers and other to join its social media campaign raising awareness about the recent rise of neo-Nazi movements in Europe by highlighting their connection to WWII-era Nazi groups.

The organization’s CEO, Robert Singer, made a personal appeal to Bulgarian Interior Minister Mladen Marinov, asking him to do everything in his power to cancel the Bulgarian National Union’s conference scheduled to take place in Sofia on Friday and Saturday. 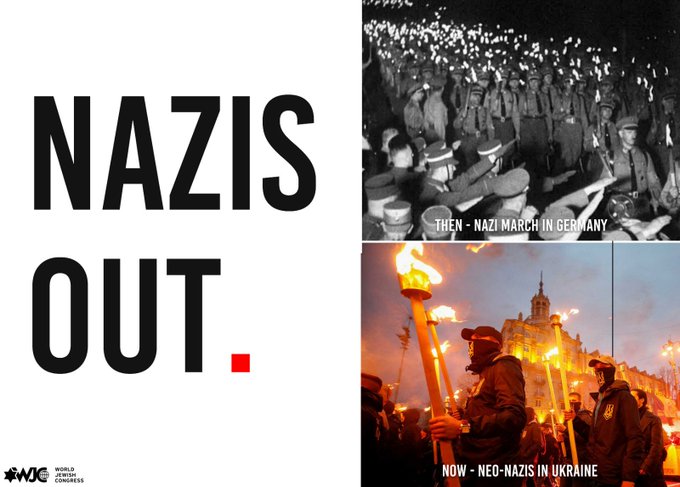 This weekend, neo-Nazis will celebrate Hitler’s birthday throughout Europe. These gatherings are a stark reminder of the past. We must do everything we can to ensure history does not repeat itself. #NazisOut

Previous BNU events have drawn nationalist supporters from other European countries. In February, hundreds of supporters walked through downtown Sofia holding torches and chanting nationalist slogans to honor a WWII general known for his anti-Semitic and pro-Nazi activities.

The annual Lukov March came despite strong condemnation by human rights groups, political parties and foreign embassies. The city mayor had banned the rally but organizers won a court order overturning the ban.

Singer said BNU’s upcoming gathering was “part and parcel with the inciting and violent nature of the annual [neo-Nazi] Lukov march and should be met with the same condemnation and denunciation.”

Last year on Hitler’s birthday, hundreds of neo-Nazis massed under heavy security in the eastern German town of Ostritz for a weekend festival. Citizens and anti-fascist activists staged spirited counterprotests in the area, vastly outnumbered concert-goers.

The festivities were organized by a member of the far-right fringe German political party NPD, which is openly xenophobic and anti-Semitic but in 2017 avoided a legal ban because of its small membership and limited influence. 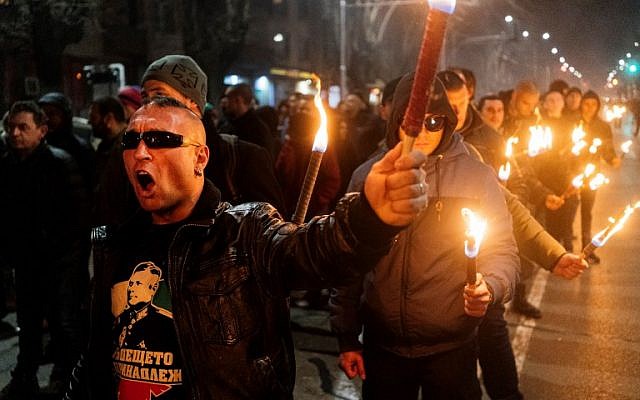 Members of nationalist organizations parade with torches during a march to commemorate Bulgarian General and politician Hristo Lukov, in the centre of Sofia on February 16, 2019. (Dimitar Dilkoff/AFP)

In neighboring Poland, around 100 people attended a Hitler birthday concert in Dzierzoniow. Days later, police raided the homes of the concert organizers, arresting two and confiscating neofascist paraphernalia including flags and banners.

The public propagation of totalitarian ideologies like fascism or communism and ethnic or racial hatred is banned in Poland, a country still grappling with the memory of Nazi occupation, and carries a penalty of up to two years behind bars.