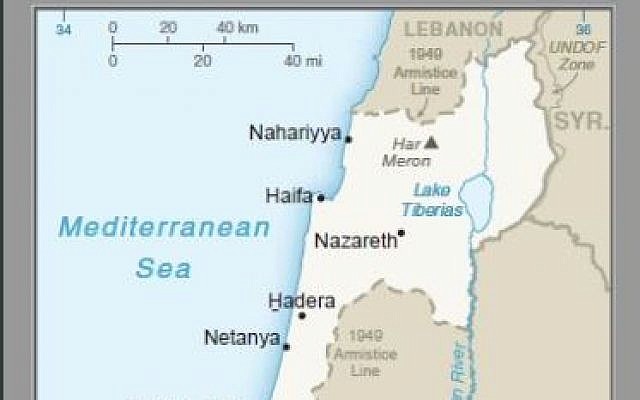 Part of a map published by the US on April 16, 2019, that for the first time shows the Golan Heights as Israeli territory. (screencapture)

The US has for the first time published a map showing the Golan Heights as Israeli territory, three weeks after President Donald Trump recognized Israeli sovereignty over the strategic plateau.

US Mideast envoy Jason Greenblatt tweeted a picture of the map on Tuesday, saying: “Welcome to the newest addition of our international maps system.”

The map shows the 1974 ceasefire line between Israel and Syria as a permanent border, whereas the border with Lebanon continues to be demarcated as the 1949 armistice line.

The map also notes that the West Bank is Israeli-occupied, with its final status to be determined in peace talks. 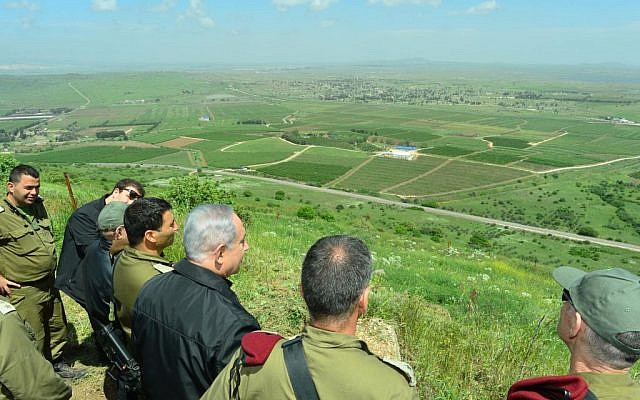 Benjamin Netanyahu is seen during a security tour in the Golan Heights, near Israel’s northern border with Syria, on April 11, 2016. (Kobi Gideon/GPO)

And it notes that while the US recognized Jerusalem as Israel’s capital in 2017, it does not take a position on the boundaries of the holy city, which is also claimed by the Palestinians as the capital of a future state.

However, while the map was updated, text attached to the Israel entry in the latest CIA world factbook, which included the map, continued to call East Jerusalem and the Golan Heights “Israeli occupied.”

Trump’s formal recognition of Israel’s sovereignty over the Golan sparked widespread international condemnation. The announcement in late March was a major shift in American policy and gave Prime Minister Benjamin Netanyahu a needed political boost ahead of April elections. 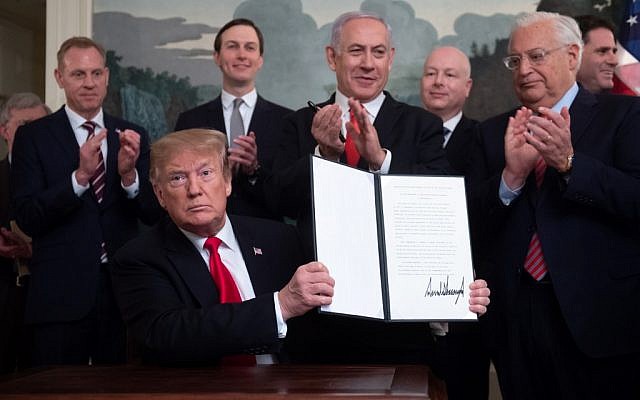 US President Donald Trump, seated, holds up a signed proclamation on the Golan Heights, alongside Israeli Prime Minister Benjamin Netanyahu, standing center, in the Diplomatic Reception Room at the White House in Washington, DC, March 25, 2019. Second from right is Trump’s Mideast envoy Jason Greenblatt and at right is US Ambassador to Israel David Friedman (Saul Loeb/AFP)

Israel captured the strategic plateau from Syria in the 1967 Six Day War and in 1981 effectively annexed the area, in a move never recognized by the rest of international community, which considers the Golan Heights to be occupied Syrian territory.

The map was published with the US indicating it may also be on board with Israel annexing West Bank settlements.

US Secretary of State Mike Pompeo on Friday said he did not believe Prime Minister Benjamin Netanyahu’s pre-election talk of extending Israeli sovereignty to all West Bank settlements would hurt the Trump administration’s long-gestating peace plan.

His comments would appear to indicate that the US plan does not provide for Palestinian statehood, or even for Palestinian control of substantive contiguous territory in the West Bank.

Asked during a CNN interview by anchor Jake Tapper whether he thought Netanyahu “vowing to annex the West Bank” could hurt the US proposal, Pompeo answered “I don’t.”

“I think that the vision that we’ll lay out is going to represent a significant change from the model that’s been used,” he added.

“We’ve had a lot of ideas for 40 years. They did not deliver peace between the Israelis and the Palestinians,” Pompeo said. “Our idea is to put forward a vision that has ideas that are new, that are different, that are unique, that tries to reframe and reshape what’s been an intractable problem.” 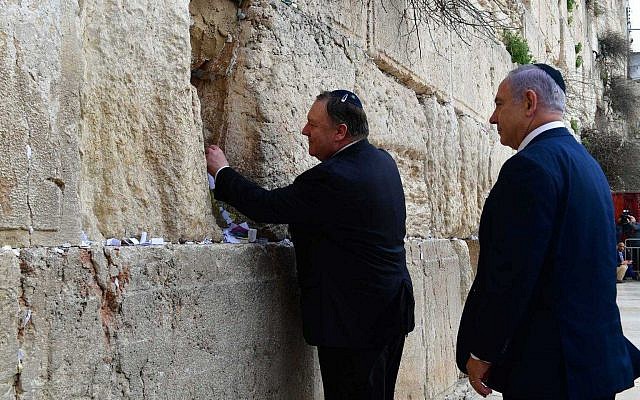 Prime Minister Benjamin Netanyahu (R) and US Secretary of State Mike Pompeo (L) at the Western Wall in Jerusalem’s Old City on March 21, 2019, during the second day of Pompeo’s visit as part of his five-day regional tour of the Middle East. (Kobi Gideon/GPO)

He said the Trump administration wanted “a better life” for both Israelis and Palestinians.

In interviews days before the elections, Netanyahu said he intended to gradually apply Israeli law to all settlements, and that he hoped he could do so with the agreement of the United States.

On Tuesday, a coalition of more than a dozen conservative groups, most of them Jewish, sent a letter to Trump tacitly asking him to respect a potential Israeli annexation of West Bank settlements.

The letter comes in response to a coalition of centrist and liberal groups who last week urged Trump not to recognize a potential Israeli West Bank annexation.