(THIS ARTICLE IS COURTESY OF ‘QUARTZ NEWS’)

That means that the world’s most powerful military has decided to support Israel’s 1967 occupation and 1981 annexation of a region that the rest of the world and the United Nations recognize as belonging to Syria. “Aggressive acts by Iran and terrorist groups, including Hizballah, in southern Syria continue to make the Golan Heights a potential launching ground for attacks on Israel,” Trump said, explaining the move.

By ignoring the United Nations charter pledge to refrain from “the threat or use of force against the territorial integrity or political independence of any state,” Trump is putting the future of other long-disputed territory in jeopardy, foreign policy experts say. “It sets a terrible precedent,” said Edward Goldberg, a professor with New York University’s Center for Global Affairs. “If the US doesn’t recognize international law as the ‘cop,’ then who does?,” he said.

“What if China goes into Taiwan tomorrow, isn’t that the same thing?,” Goldberg said, “or Pakistan into Kashmir?”

Beijing considers Taiwan part of China, despite the fact that the island nation has an indigenous population, is self-governing, and has conducted independent democratic elections since the 1990s. Most other democracies around the world don’t recognize Taiwan as an independent country, in deference to China, and it is barred from the United Nations. While the United States has recently partnered with Taiwan officials to fight intellectual property theft, this January Chinese president Xi Jinping warned that Beijing could retake the island by force.

The Kashmir region between India and Pakistan has been disputed for more than 70 years, a legacy of the Partition that accompanied Britain’s withdrawal from India in 1947. Tensions rose in the volatile region in recent weeks, after India conducted a “pre-emptive strike” in Pakistan-controlled territory, and Pakistan captured an Indian fighter pilot. The mostly Muslim residents of the India-administered Kashmir Valley view the national government as an occupying force, and Pakistan officials support their self-government.

So far there are no signs that the Trump administration is interested in inserting itself into the long-simmering Pakistan-India dispute. However, the US Navy has increased its presence in the Taiwan Strait, most recently on March 24, responding to Beijing’s circling of the island in recent drills.

Trump made the unprecedented Golan Heights decision in a bid to boost prime minister Benjamin Netanyahu ahead of national elections April 9. Netanyahu has been charged in several corruption cases, although he still maintains an edge in polls. He applauded as Trump signed the proclamation, while secretary of state Mike Pompeo and vice president Mike Pence looked on: 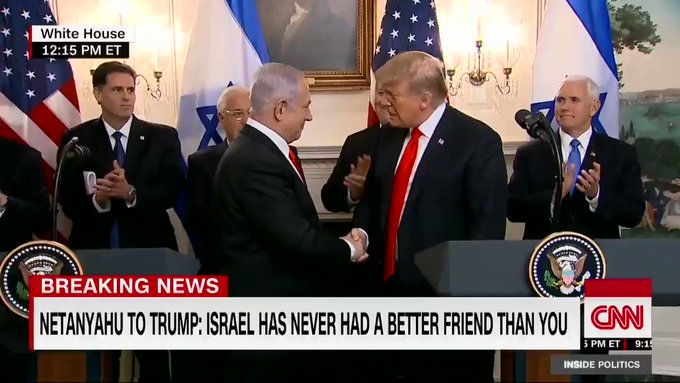 Syria, Lebanon, Turkey, and the United Nations immediately condemned Trump’s proclamation, and the UN declared Israel’s annexation of the area “null and void.” As president, Trump has pulled the US out of international agreements, including the Paris Climate Accord and the TransPacific Partnership, but the Golan Heights decision is being specifically criticized as breaking international law.