McCarthy, a former federal prosecutor, said on “Fox & Friends” Sunday that attorneys with the Southern District of New York are “clearly” going after Trump, given recent revelations about statements by Michael Cohen, his former personal lawyer, to the U.S. district court.

“They are clearly going after the president on campaign finance violations and I think if you read the sentencing memo the Southern District filed in Cohen’s case, it’s clear that Trump is the target and he’ll be indicted eventually,” McCarthy said.

McCarthy served as assistant U.S. attorney for the Southern District for 18 years before leaving the Justice Department in 2003.

On Friday, the U.S. attorney’s office for the Southern District filed a sentencing memo recommending Cohen receive a 42-month prison sentence after he pleaded guilty to multiple counts of business and tax fraud, making false statements to Congress and violating campaign finance law.

Cohen told the court in August that during the 2016 presidential campaign Trump directed him to make hush money payments to at least two women who say they’ve had affairs with him after he married his third wife, Melania. The president has denied the affairs and the hush money allegations.

The second payment under legal scrutiny is $150,000 made by American Media Inc. to silence Karen McDougal, which prosecutors say constituted an illegal corporate donation to Trump’s campaign. The National Enquirer’s parent company was chaired at the time by Trump’s longtime confidante, David Pecker.

Subscribe to the Politics email.
How will Trump’s administration impact you?

Mueller did not take a position on Cohen’s sentence but the special counsel’s office wrote in their sentencing memo that Cohen has “gone to significant lengths” to help in their investigation.

“You think the president of the United States is going to be indicted… I mean that kind of stops me in my tracks,” Henry said.

McCarthy said he can’t be positive whether the Justice Department would indict a sitting president or wait until Trump is out of office.

“I think what can happen is they could indict and he could be tried down the road when he’s out of office,” McCarthy said. “But will [Trump] be charged? Are they setting the stage to file charges against him? If you read that sentencing memo, I can’t come to any other conclusion.”

Rep. Adam Schiff of California, the ranking Democrat on the House Intelligence Committee, said on CBS’ “Face the Nation” on Sunday that Trump “may be the first president in quite some time to face the real prospect of jail time.”

“There’s a very real prospect that on the day Donald Trump leaves office, the Justice Department may indict him,” Schiff said. 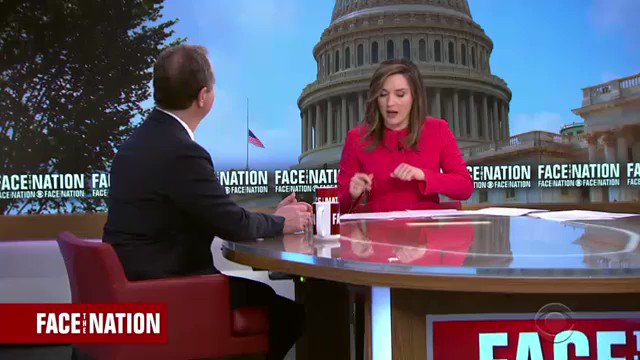 .@AdamSchiff on the Russia Investigation: My takeaway is there’s a very real prospect that on the day Donald Trump leaves office the justice department may indict him. That he may be the first president in quite some time to face the real prospect of jail time.

1,188 people are talking about this

McCarthy delved deeper into the case in an Op-Ed published Sunday on Fox News’ website.

“Campaign finance violations have a high proof threshold for intent,” McCarthy wrote. “President Trump could argue that because there was no spending limit on his contributions, he did not think about the campaign-finance implications, much less willfully violate them.”

“The point for this day is that the Cohen case in New York City is not about Cohen,” he concluded. “The president is in peril of being charged.”