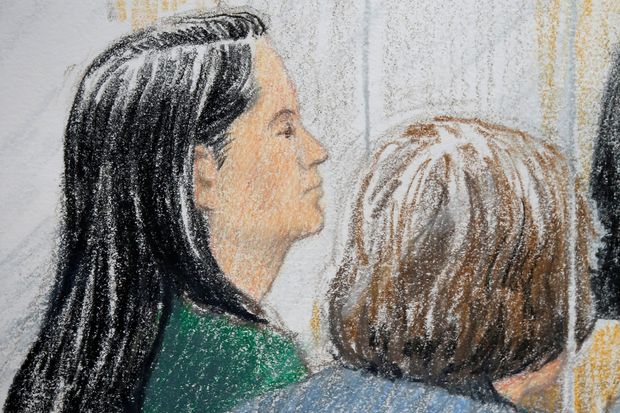 Huawei CFO Meng Wanzhou, who was arrested on an extradition warrant, appears at her bail hearing in Vancouver, British Columbia, on Friday. PHOTO: STRINGER/REUTERS
170 COMMENTS
By
Eva Dou

Chinese Vice Foreign Minister Le Yucheng summoned Canada’s ambassador to Beijing, John McCallum, on Saturday to deliver the warning, according to a statement from the Chinese Foreign Ministry.

The statement doesn’t mention the name of Huawei’s chief financial officer, Meng Wanzhou, though it refers to a Huawei “principal” taken into custody at U.S. request while changing planes in Vancouver, as was Ms. Meng. The statement accuses Canada of “severely violating the legal, legitimate rights of a Chinese citizen” and demands the person’s release.

“Otherwise there will be severe consequences, and Canada must bear the full responsibility,” said the statement, which was posted online late Saturday.

A spokesman for Canadian Foreign Minister Chrystia Freeland declined to comment on Saturday, and instead referred to remarks Ms. Freeland made to reporters on Friday.

On Friday, Ms. Freeland said in a conference call there was no political interference in the decision to detain Ms. Meng, and the detention was handled at the “officials’ level.” She said Canada’s relationship with China is something the country values, and Mr. McCallum “has been very clear that this was a matter handled as part of our rule-of-law process.”

The warning marks an escalation in rhetoric by the Chinese government over the case of Ms. Meng, who is in the midst of hearings in Canada for extradition to the U.S. to face allegations she violated sanctions on dealing with Iran.

The Canadian judge in Ms. Meng’s hearing on Friday, Justice William Ehrcke of the Supreme Court of British Columbia, didn’t rule on her bail, and scheduled the court to reconvene on Monday morning.

Aside from being CFO and deputy chairwoman, Ms. Meng is the daughter of Huawei’s founder. The status has made her situation seem more bitter to many Chinese. Social-media sites have been flooded with criticism that the U.S. is trying to pull down an iconic Chinese company and strike a blow in the countries’ trade fight.

In court filings for  Ms. Meng’s bail hearing in Vancouver on Friday, U.S. authorities alleged that she misled banks about Huawei’s ties to a subsidiary that did business in Iran. Those banks cleared hundreds of millions of dollars in transactions that potentially violated international sanctions, according to the filings.

The case risks complicating U.S.-China trade negotiations, with the two sides having agreed to refrain from imposing new tariffs to try to seek a compromise within the next three months.

Paul Vieira contributed to this article.