SANA, Yemen — At a restaurant in the Yemeni capital, Sana, a waiter brought bowls of slow-cooked lamb served with mounds of rice. For dessert there was kunafa, the classic Arab dish of golden brown pastry filled with cheese.

An hour later I was back at work, in a hushed hospital ward filled with malnourished children with skeletal faces, hanging between life and death for want of money and a good meal.

If that juxtaposition strikes you as jarring, even distasteful, it felt that way to me, too.

Crisis zones are often places of stark contrast, but in Yemen the gulf is particularly uncomfortable. The problem isn’t a lack of food; it’s that few people can afford to buy what food is available.

Years of blockades, bombs and soaring inflation have crushed the economy. A crushed state means there is no safety net.

As a result, beggars congregate outside supermarkets filled with goods; markets are filled with produce in towns where the hungry eat boiled leaves; and restaurants selling rich food are a few hundred yards from hunger wards filled with desperation, pain and death.

For a reporter, that brings a dilemma. Journalists travel with bundles of hard currency, usually dollars, to pay for hotels, transport and translation. A small fraction of that cash might go a long way for a starving family. Should I pause, put down my notebook and offer to help?

It’s a question some readers asked after we published a recent article on Yemen’s looming famine.

Many were touched by a powerful photograph by Tyler Hicks of Amal Hussain, an emaciated 7-year-old girl whose haunting stare brought the war’s human cost into shocking focus.

And many were devastated to learn that, soon after we left, Amal’s mother brought her back to the shabby refugee camp they call home, where she died a few days later. 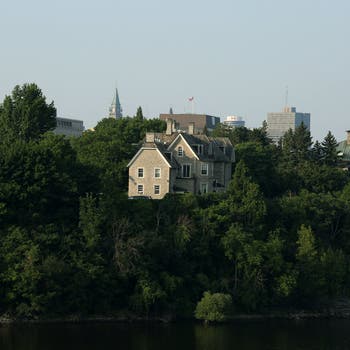 Justin Trudeau’s Official Home: Unfit for a Leader or Anyone Else 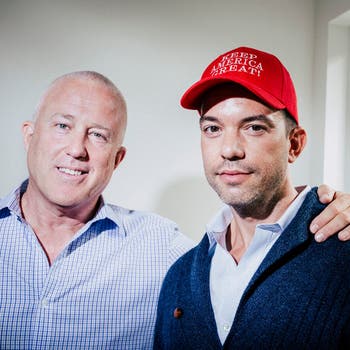 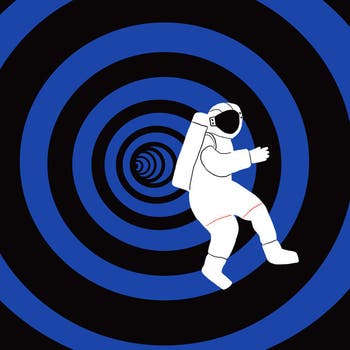 Amal Hussain, who died at age 7 from malnutrition soon after this photograph was taken.CreditTyler Hicks/The New York Times 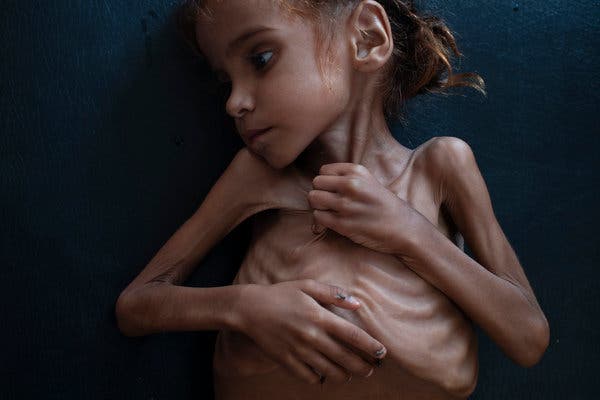 Some, in their anguish, turned the focus back on us.

Why didn’t we do something to save Amal’s life, they wanted to know. Did we just take the photo, conduct the interview and move on? Couldn’t we have somehow ensured that her family would get help?

“You can take the picture AND provide assistance,” one woman said on Twitter. “One doesn’t rule out the other.”

The questions resonated. Reporters are trained to bear witness; aid workers and doctors have the job of helping people.

Donating money, or other forms of assistance, can be fraught with ethical, moral and practical complications. Is it fair to single out one person or family for help? What if they embellish their story for the next foreigner who comes along, thinking they could get more money?

Doctors show us around, and sometimes we end up acting like them — examining stick-like limbs and flaccid skin with clinical detachment; tabulating figures about weight and age; listening as families recount their tragedies with amazing calm. The prospect of death is discussed. We nod sagely, make a note, move on.

But while we may try to mimic a stone, we are not stones, and every day in Yemen someone told me something that made a lump rise in my throat.

Let’s cut to the chase and get the U.N. and it’s agencies in there. Just do it. The USA should be spear heading the effort. War between armies is one thing. War on starving people is quite another….no grey area! NONE!

Usually it was a mundane detail, like the lack of a few dollars to take a dying child to the hospital. Yemen, you realize, is a country where people are dying for lack of a taxi fare.

SIGN UP
An injured Yemeni fighter with the Saudi-led Arab coalition that is battling Iran-allied Houthis for control of Yemen at a field hospital in Durayhimi.CreditTyler Hicks/The New York Times 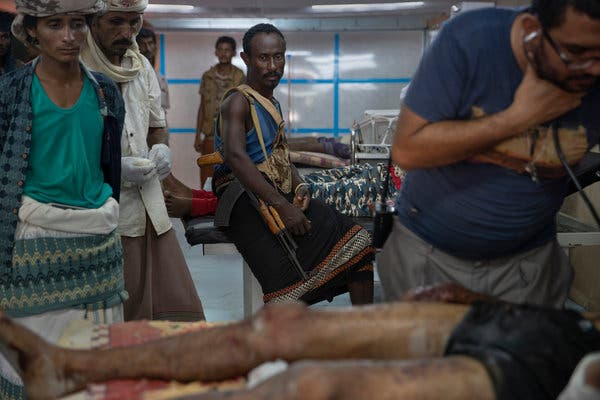 Yemenis have to navigate such terrain, too.

While some are dying, others are getting on with living. One night we returned to our hotel in Hajjah, a town ringed by rocky ridges in a province that has been pummeled by Saudi airstrikes. Lying in bed, I was startled by a loud bang then a burst of light that filled the sky — not a bomb, but fireworks.

Since the start of the war, the rate of marriage in Yemen has gone up. And so, in this town where malnourished infants were perishing at the city hospital, others were dancing and celebrating through the night.

But the surge in weddings, it turned out, was a survival mechanism.

Across the social spectrum, Yemenis are sliding down the poverty ladder. Where once a mother bought a sack of rice to feed her family, now she can afford only a small bag. The hand of a daughter in marriage brings a bride price, and so weddings can be a source of income for stretched families.

Disturbingly, many of the brides are children. According to Unicef, two-thirds of Yemeni girls are married before the age of 18, up from 50 percent before the war.

As we crossed Yemen — from the battle-scarred port of Hudaydah to the Houthi-held mountains — on a bumpy 900-mile journey, we saw scenes of heartbreaking suffering that unfolded against a backdrop of spectacular mountains, and customs that stubbornly endure despite everything.

Every day, town centers bustled with men buying khat, the narcotic leaf beloved by Yemenis. The khat bazaars are a social event. Men, some with guns over their shoulders, gather to trade news, meet friends and prepare for the afternoon chew.

Women in black cloaks flitted between them; in one place, a loud argument erupted into fisticuffs. Even as starvation bites, some are reluctant to cut back on their habit.

In one health clinic, Ibrahim Junaid, a worried father standing over his ailing 5-month-old son, was chewing a lump of khat that left a green stain on his teeth and lips.

Mr. Junaid was 60; his wife, 25, stood silently by his side. The nurses wrapped the boy in a gold foil blanket to keep him warm. 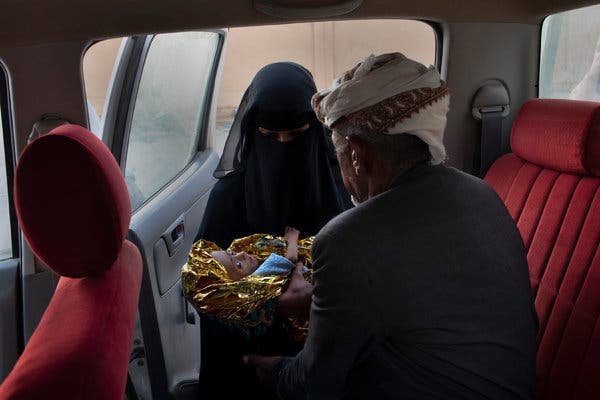 Mr. Junaid regretted that his son hadn’t enough to eat, adding that he had a lot of mouths to feed; he had married twice, and fathered 13 children.

The value of practices like chewing khat may be hard to understand in such turbulent times. But for men like Mr. Junaid, it is an integral part of their day. And it is a mark of the resilience of an ancient society, one of the oldest civilizations of the Middle East.

“People say Yemen is in a state of chaos, but it’s not,” said Thierry Durand, an aid worker who has worked in Yemen since the 1980s, and now runs a Doctors Without Borders hospital in Mocha. “There is still structure.”

“You can’t put it in three lines in your paper or describe it in three minutes on TV,” he continued. “This country is structured by family, tribe, traditions — and despite everything, those structures are still there, and they are strong.”

Still, Yemeni society is being ravaged by war. Airstrikes by the Saudi-led coalition, aided by American bombs, have killed thousands of civilians, and displaced many more. But for most Yemenis, war strikes their lives in quieter, more insidious ways.

Bombs blow up bridges or factories, killing jobs, causing the currency to crumble and prices to soar, and forcing families to abstain from meat, then vegetables. Soon, they are dependent on international food aid or, in the worst cases, resort to meals of boiled leaves.

A bridge in Bani Hassan was damaged by a Saudi airstrike.CreditTyler Hicks/The New York Times 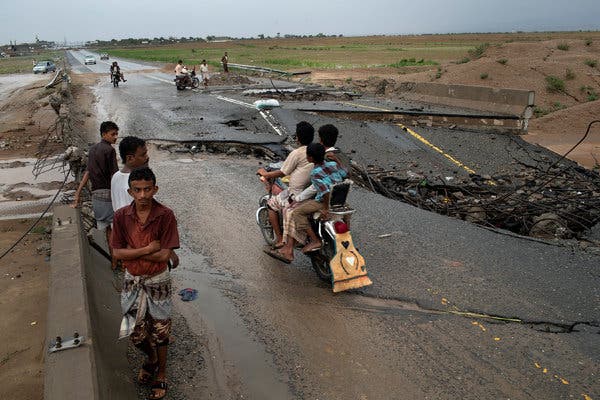 Small but vital things, like a cab fare, become unattainable.

As we drove away from the small hospital in Aslam, where Amal Hussain was being treated, we passed a young couple hitching a ride on the side of the road. They were holding a small infant. We stopped and offered them a ride.

They squeezed into the passenger seat — the father, Khalil Hadi, enveloped by the black cloak of his wife, Hanna, who held their fragile 9-month-old son, Wejdan, who had just been released from the malnutrition ward.

Theirs was a typical story. Their home near the Saudi border had been bombed, so they rented a room in a house near Aslam. Mr. Hadi tried to earn money driving a motorbike taxi, and by foraging for wood to sell at the market.

But it wasn’t enough, and when he tried to go home, the Houthi soldiers told him the area was a military zone. Their diet was reduced to bread, tea and halas, the vine that grew locally. His wife was four months pregnant with their second child.

Mr. Hadi wasn’t looking for pity; many people were in similar trouble, he said. “I’d do anything to make some money,” he said. “The situation is so hard.”

At a junction in the road, the couple stepped out, offered thanks and began to walk away. Fumbling in my pocket, I called them back.

I pulled out a wad of Yemeni notes — about $15 worth — and pressed it into his hand. It seemed so futile, in the greater scheme of things. What could it buy them? A few days respite, if even that?

Mr. Hadi accepted the money with a gracious smile. As we drove off I saw the couple amble down a dusty road, toward their shelter, their ailing son held tight. 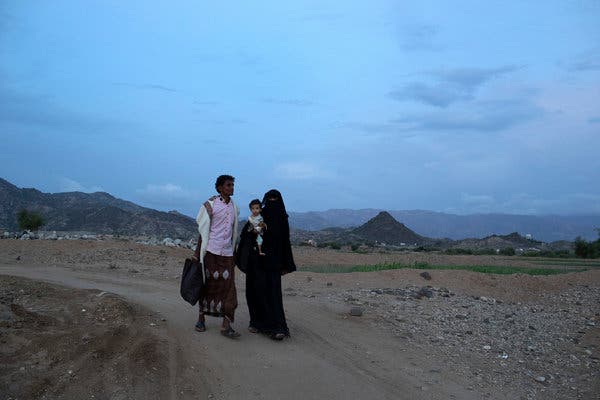 A version of this article appears in print on Nov. 30, 2018, on Page A4 of the New York edition with the headline: Contrast in Crushed State Presents Journalists With Ethical Dilemma. Order Reprints | Today’s Paper | Subscribe
READ 118 COMMENTS