The Israel Antiquities Authority on Wednesday unveiled what it said was a rare 9,000-year-old stone mask linked to the beginnings of agricultural society. It is one of only 15 in the world.

The IAA said the pink and yellow sandstone object was discovered in a field near Pnei Hever, a West Bank settlement east of Hebron, and handed in to authorities in early 2018.

The rare mask may have been worn by people as part of rituals surrounding ancestor worship, according to IAA archaeologist Ronit Lupu.

“Discovering a mask made of stone, at such a high level of finish, is very exciting. The stone has been completely smoothed over and the features are perfect and symmetrical, even delineating cheek bones. It has an impressive nose and a mouth with distinct teeth,” Lupu said.

Archaeologists believe it was meant to be worn or attached to an artifact for display, because it has four holes drilled into its edges to enable it to be tied.

Its smooth finish was achieved by painstaking work with the stone tools of the Neolithic or “new stone” age.

Only 15 such masks have ever been found anywhere in the world, and just two have a usable provenance — that is, archaeologists know where they were found and can therefore place them with relative confidence in the context of a period and place.

The remaining 13 “are in private collections throughout the world, which makes it more difficult to study them,” the IAA announcement said. 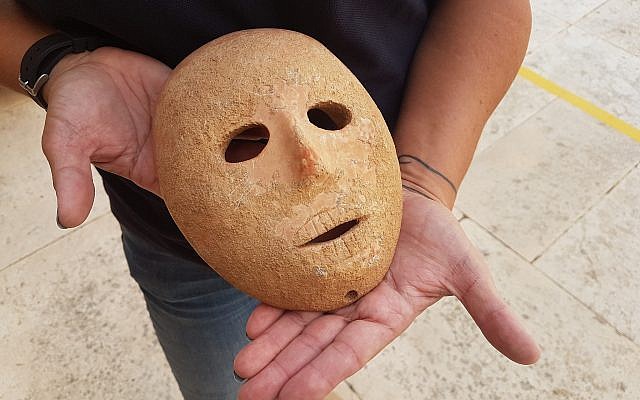 The mask will shed new light on a time of profound transformation, as humans were moving from a hunter-gatherer lifestyle to permanent settlement and systematic agriculture, a shift that led to the rise of the first cities and, eventually, the first complex states and writing.

“Stone masks are linked to the agricultural revolution,” according to Omry Barzilai, head of the IAA Archaeological Research Department. “The transition from an economy based on hunting and gathering to ancient agriculture and domestication of plants and animals was accompanied by a change in social structure and a sharp increase in ritual-religious activities. Ritual findings from that period include human shaped figurines, plastered skulls, and stone masks.”

This was a time of ancestor worship, explained Lupu, and of an artistic culture that seemed focused on human faces.

“It was part of the ritual and retention of family heritage that was accepted at the time. For example, we find skulls buried under the floors of domestic houses, as well as various methods of shaping and caring for the skulls of the dead,” Lupu said. “This led to plastering skulls, shaping facial features, and even inserting shells for eyes. Stone masks, such as the one from Pnei Hever, are similar in size to the human face, which is why scholars tend to connect them with such worship.” 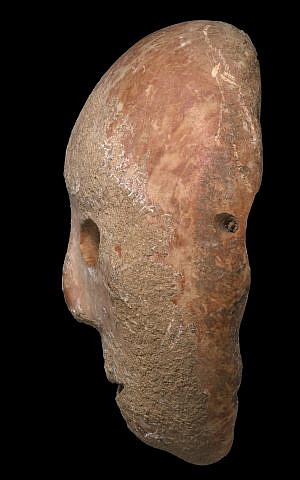 Side view of a 9,000-year-old stone mask discovered in the southern Hebron Hills area of the West Bank in early 2018. (Clara Amit, Israel Antiquities Authority)

Lupu explained that not only the mask’s discovery, but also knowledge of its provenance, made it a rare find.

“The mask is a unique finding in the archaeological world. It is even more unusual that we know which site it came from. The fact that we have information regarding the specific place in which it was discovered makes this mask more important than most other masks from this period that we currently know of,” Lupu said.

The southern Hebron Hills area has been the source of other masks dated to the same time, known to specialists as the Pre-Pottery Neolithic B period. Its discovery thus bolsters the prevailing belief among archaeologists that this area served as a key center for the production of such masks, “and most likely also for ritual activities” associated with them, the statement said.

Initial conclusions from the study of the mask by scientists at the Israel Antiquities Authority and the Geological Survey of Israel are to be presented Thursday at the annual meeting of the Israel Prehistoric Society at the Israel Museum in Jerusalem.

Editor’s note: An earlier version of this story inaccurately described the way in which authorities acquired the mask