Russian President Vladimir Putin said France specifically asked him not to hold one-on-one meetings with US President Donald Trump during World War I commemorations in Paris this past weekend — but he ended up chatting with him anyway.

Putin on Sunday afternoon said he agreed to France’s request so as to “not violate” France’s planned events. “We will agree that we will not violate the schedule of the host party here: At their request, we will not organize any meetings here,” he told the Russian state-owned RT news channel, according to the state-run Interfax news agency.

Less than an hour later, however, Putin told reporters that he did end up having a brief conversation with Trump.

When asked by journalists whether he had a chance to talk to Trump, Putin said “yes,” Interfax and RT reported. According to RT, Putin added that the chat was “good.” Where and when that talk took place is unclear.

Read more: Putin saved his warmest greeting for Trump as he met world leaders in Paris, and Trump returned the love

The leaders had been in Paris over the weekend to mark 100 years since the armistice that ended World War I. German Chancellor Angela Merkel, Canadian President Justin Trudeau, and the European Commission’s president, Jean-Claude Juncker, also attended the commemoration.

It was the first time the two leaders met since their summit in Helsinki in July, during which Trump claimed that he didn’t “see any reason” why Russia would have interfered in the 2016 US elections. National security experts have said Trump behaved like a “controlled spy.”

According to the Russian newspaper Kommersant, the request that Putin and Trump not meet one-on-one came from French President Emmanuel Macron.

The French president asked that his Russian and US counterparts not hold negotiations in Paris that could “eclipse” the events and meetings that Paris had organized, Kommersant said, citing a European diplomatic source.

Paris’ eagerness that Trump and Putin not meet even resulted in a last-minute change in the seating plan at a lunch for the leaders at the Elysée Palace, RT reported.

A preliminary seating plan of the lunch showed Trump placed next to Putin, The Guardian reported, but photos of the lunch released by the Russian presidency showed Putin seated between Juncker and UN Secretary-General António Guterres. 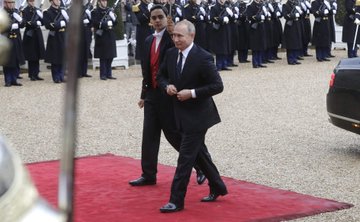 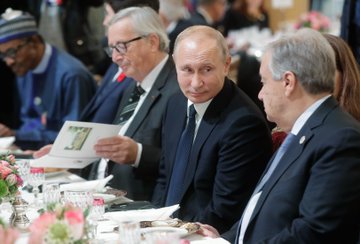 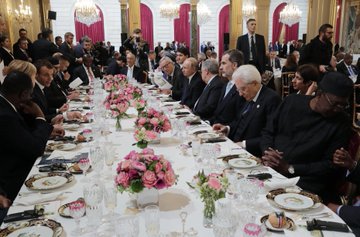 359 people are talking about this

Trump was placed next to Macron, who sat opposite Putin — making it difficult for the US and Russian presidents to have personal asides, The Guardian reported.

The White House press secretary, Sarah Huckabee Sanders, said the leaders discussed a “variety of issues,” including the Intermediate-Range Nuclear Forces Treaty — which Trump has threatened to withdraw from— as well as North Korea and Syria.

Putin said he hoped to meet Trump one-on-one on the sidelines of the G20 summit in Argentina in late November instead, RT and Interfax reported.

NOW WATCH: A cybersecurity expert showed us how hackers can tap into an office phone and listen to everything you’re saying