(THIS ARTICLE IS COURTESY OF ‘THINK PROGRESS’)

Police officer shoots and kills good guy with a gun

Jemel Roberson was a 26-year-old armed security guard who apprehended a shooter. He was also black

Around 4:00 a.m. ET on Sunday morning, a disgruntled group of drunken men were asked to leave Manny’s Blue Room Bar in the Chicago suburbs. According to WGN-TV,  one of those men returned with a gun and opened fire.

Amid the chaos, 26-year-old armed security guard Jemel Roberson chased one of the suspects outside of the club and apprehended him at gun point.

Roberson seemingly did everything right. But when Midlothian police officers arrived to the scene, one of them saw the security guard pointing a gun at the suspect, and shot and killed Roberson on the spot.

“Everybody was screaming out, ‘Security!’ He was a security guard,” a witness, Adam Harris, told reporters. “And they still did their job, and saw a black man with a gun, and basically killed him.”

Many anti-gun control politicians and advocates, including President Donald Trump, frequently say that armed security guards are the only way to stop mass shootings. Last month, after eight people were killed at a Pittsburgh synagogue, Trump suggested that there should be armed guards at churches and synagogues.

Roberson was both an armed security guard and a good guy with a gun. He risked his life to apprehend a shooter. And police killed him anyway.

Like many NRA-based talking points, this one doesn’t seem to apply to black people.

On social media, loved ones mourned the loss of Roberson. LeAundre Hill, a pastor and family friend, said that he was a great pianist who had just played at HIll’s grandmother’s funeral on Friday.

Jemel has played for @PurposedChurch for the last several years and just played for my grandma’s funeral Friday and now he is gone. 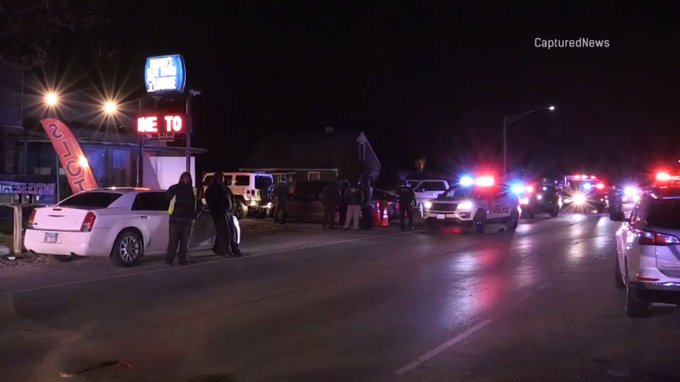 Roberson was also reportedly studying to be a police officer.

The officer who killed Roberson has already been placed on paid administrative leave, per protocols. WGN-TV reports that the Cook County Sheriff’s Office is conducting the criminal investigation of the original shooting, and the State Police Public Integrity Task Force is investigating Roberson’s death.

Friends and family have already set up a GoFundMe account to raise money for Roberson’s burial.

“Jemel Roberson was a young man who was greatly loved by all who knew him.  He was the light of his mother Beatrice’s life, and was a devoted loving son,” the GoFundMe reads. “Jemel was a gifted basketball player and musician, and his love for God and his family were at the forefront of his life.

“Sadly, Jemel’s life was tragically and unexpectedly cut short this morning as he tried to save others from senseless violence.  Today, many remember him as a hero; one who put others before himself.”