Washington (CNN)In a political world seemingly incapable of being shocked, the resignation of United Nations Ambassador Nikki Haley on Tuesday did just that.

The most common reaction upon hearing the news, which Axios’ Jonathan Swan first reported, was “WHAT????” (A senior State Department official told CNN that Haley had only told her staff about her resignation Tuesday morning. Another source familiar with the matter said Haley’s resignation caught national security adviser John Bolton and Secretary of State Mike Pompeo by surprise.)
And that reaction was quickly followed by “WHY???”
The answer to the second question is now the big story. And, in truth, we just don’t totally know yet why Haley, who seemed to be one of the few Trump administration officials able to stay in the good graces of Trump, the international community and establishment Republicans all at once, would decide to simply (and suddenly) call it quits.
Trump, seeking to minimize any damage to himself from the surprise resignation, sat down with his outgoing UN ambassador shortly after the news broke and insisted he a) knew about her plans to leave last week and b) she had made the decision because she had served for two years (actually one year and seven months) and felt like it was time to go. (Haley will leave her job at the end of the year, Trump announced Tuesday.)
“It’s been eight years of intense times,” Haley said of her time as governor of South Carolina and her time in the administration. “And I am a believer in term limits.” She added: “I don’t have anything set on where I am going to go.”
And that might be true! But, the fact that neither Bolton nor Pompeo had any inkling that Haley was preparing to resign casts some doubt on the this-was-all-part-of-the-plan explanation. And, losing an Indian-American woman four weeks before an election and on the heels of a very contentious Supreme Court fight that divided deeply along gender lines suggests is far less than ideal timing for Trump.
So, what else MIGHT be beyond Haley’s shock resignation? Here are a few theories:

1. She got edged out by the likes of Bolton and Pompeo

It’s no secret that the national security adviser and secretary of state, respectively, are foreign policy hard-liners. And that while Haley was outwardly very tough within the UN (and the Trump administration), she was reportedly a voice urging more moderation — and toeing the preferred line of establishment Republicans — in private. While Haley was, without question, a star of the first year of Trump’s administration, she did clash with him at times over, among other things, Russia. During a TV appearance in April, Haley announced the US would impose new sanctions on Russia. Trump insisted no such sanctions had been put in place and the White House blamed the misunderstanding on a “momentary confusion” on Haley’s part. She quickly responded that she did not “get confused.”
With Bolton and Pompeo as the new shiny objects in the Trump Cabinet, Haley may have seen the writing on the wall — and decided to leave on her own terms (before she is pushed).

2. She needed to make some money 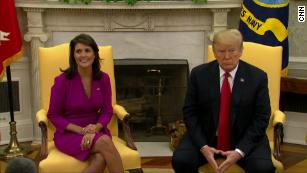 Trump’s big announcement on Nikki Haley 02:04
With one child in college and another headed there in the next few years, Haley could well have been lured by the seven-figure salaries available to someone with a resume like hers in the private sector.
(Also worth noting: Over the weekend, Citizens Responsibility and Ethics in Washington, a government ethics watchdog, requested an investigation into Haley’s acceptance of seven free flights from South Carolina businessmen in 2017.)

3. She wants to run for president

There’s very little doubt that Haley has her eye on the White House at some point in the future. (Doubt me? Haley brought her most trusted political adviser — and pollster — Jon Lerner to the UN with her.) Knowing that her resignation would set off talk of a potential primary challenge to Trump in 2020, Haley laughed off the possibility during her comments on Tuesday — making clear she plans to campaign for Trump in two years time.
In truth, Haley is too smart to run against Trump in 2020. While Trump’s approval ratings are in bad shape with the broad electorate, he is among the most popular Republican presidents ever among Republican voters. No one is beating Trump in a primary in 2020 — not Haley, not anyone.
BUT, just because Haley isn’t running in 2020 doesn’t mean she isn’t running. Remember that whether Trump wins or loses in 2020, the 2024 Republican nomination will be open. Yes, Vice President Mike Pence is a likely candidate — particularly if Trump wins a second term in 2020. And he will be the Trump candidate. But what if there is a desire for a candidate who has OK relations with Trump world but also is not seen as totally and completely aligned with a former president who was, to put it mildly, a non-traditional Republican candidate and president?
Enter Haley! She will have spent almost two years serving Trump, yes, but, by the time 2024 comes around, she will be six years removed from the Trump White House. Which might be a very appealing thing for Republicans.