On the third day of Supreme Court nominee Brett Kavanaugh’s confirmation hearing in front of the Senate Judiciary Committee, he referred to contraception as “abortion-inducing drugs.”

Judge Kavanaugh was responding to a question from Sen. Ted Cruz (R-Texas) on Thursday about his 2015 dissent in the Priests for Life v. HHS case. Kavanaugh had sided with the religious organization, which didn’t want to provide employees with insurance coverage for contraceptives. 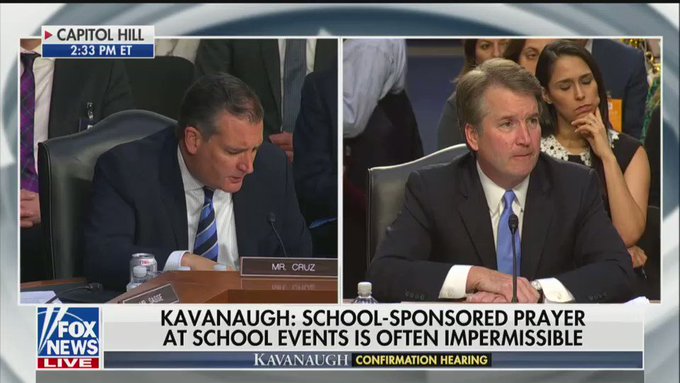 Kavanaugh seems to refer to birth control as “abortion-inducing drugs”

Priests for Life, a Catholic group that opposes abortion rights, filed a lawsuit against the Department of Health and Human Services in 2013 over the provision under the Affordable Care Act that required certain health care providers to cover birth control. The group argued that the provision was a violation of the Religious Freedom Restoration Act ― the same premise of the Hobby Lobby lawsuit in 2014.

A panel of the U.S. Court of Appeals for the D.C. Circuit ruled against Priests for Life in 2014. When the group tried and failed to get a full court hearing the next year, Kavanaugh dissented to lay out why he would have ruled for them.

“We at Priests for Life have personal experience of Judge Kavanaugh’s approach to religious freedom, because he sided with us when we had to defend our religious freedom in the D.C. Circuit Court of Appeals,” Father Frank Pavone, the organization’s national director, said in July.

“At a time when these freedoms need more defense than ever,” he went on, “we urge the Senate to conduct a swift and fair confirmation process, focused on the excellent qualifications of Judge Kavanaugh, and not on the politics of personal destruction that the Democrat Left are such experts at carrying out.”

Following Kavanaugh’s remarks on Thursday, Dawn Laguens, executive vice president at the Planned Parenthood Action Fund, said it was “no wonder” activists have been so emphatic in protesting his nomination.

“Kavanaugh referred to birth control ― something more than 95 percent of women use in their lifetime ― as an ‘abortion-inducing drug,’ which is not just flat-out wrong, but is anti-woman, anti-science propaganda,” Laguens told HuffPost. “Women have every reason to believe their health and their lives are at stake.”

“Let me break it down for you, Brett,” she went on. “Birth control is basic health care. Birth control allows women to plan their futures, participate in the economy, and ― for some women with health issues like endometriosis ― allows them to get through the day.”

Bob Bland, co-president of the Women’s March, called Kavanaugh’s potential ascent to the Supreme Court “an emergency, all-hands-on-deck moment for women across America.”

“We know Brett Kavanaugh is against abortion, and now we know he thinks birth control is abortion,” Bland said Thursday.

Cruz, who brought up the Priests for Life case at Thursday’s hearing, used language similar to Kavanaugh’s when he referred to contraception as “abortifacients” at a 2013 summit. The religious right’s use of terms like “abortifacient” and “abortion-inducing drugs” has long been criticized by medical and pro-abortion rights communities.

Language has been amended to more precisely describe the timeline of the Priests for Life case.