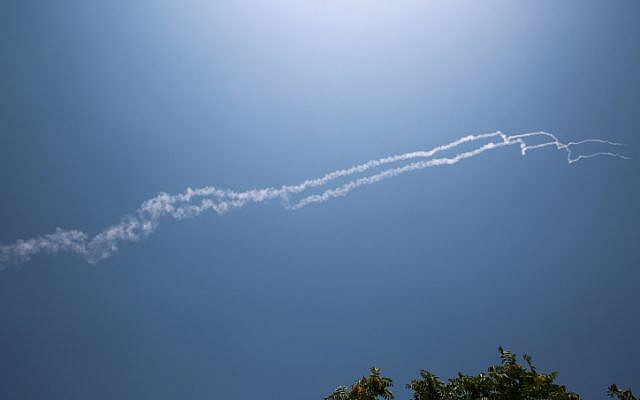 The Israeli Air Force shot down a Syrian fighter jet that traveled two kilometers into Israeli airspace on Tuesday afternoon, the military said.

“Two Patriot missiles were fired at a Syrian Sukhoi-model fighter jet,” the Israel Defense Forces said in a statement.

The IDF said the aircraft was monitored as it approached the border with the Golan Heights.

“It penetrated two kilometers into Israeli airspace and was shot down,” the army said.

According to Sky News Arabia, the plane crashed inside southwest Syria, in the Yarmouk Basin, an area still under the control of the Islamic State terrorist group. It was not immediately clear if the pilots ejected before the fighter jet was shot down or what their condition was.

The official Syrian news outlet SANA confirmed that Israel had shot at one of its fighter jets, but said the plane was inside Syrian airspace at the time it was targeted.

According to SANA, Israel fired at “one of our war planes, which are leveling [terrorist] encampments in the Saida region on the outskirts of the Yarmouk Basin, in Syrian airspace.”

A military source quoted by SANA accused Israel of aiding “terrorists” in the country’s southwest, where the Syrian air force has been conducting extensive bombing raids throughout the day against a number of opposition groups. 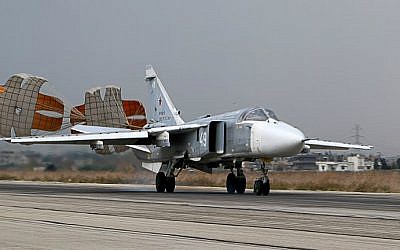 File: A Russian Sukhoi Su-24 bomber lands at the Russian Hmeimin military base in Latakia province, in the northwest of Syria, on December 16, 2015. (Paul Gypteau/AFP)

It was not immediately clear if the plane was a Sukhoi-22 or a Sukhoi-24, two different types of Russian-made fighter jets in use by the Syrian Air Force, the Israeli military said.

The IDF said it had noticed increased air force activity in southwestern Syria, near the border, since the morning.

“We have passed a number of messages, in a number of languages, in order to ensure that no one violates Israeli air space,” IDF spokesperson Lt. Col. Jonathan Conricus told reporters.

The spokesman said Israel has been in regular contact with the Russian military, which operates extensively in southwestern Syria, in order to prevent any conflict with Moscow.

According to the IDF, the fighter jet took off from the Iran-linked T-4 air force base in central Syria, which Israel has bombed in the past, and traveled “at high speed” toward the Golan Heights.

Conricus said there was no “confusion” about the fact that this was a Syrian fighter jet. In the past, Israel has hesitated in shooting down incoming aircraft out of concerns they might belong to Russia.

Israel stressed that it will continue to enforce the 1974 Separation of Forces Agreement, which requires Syria to abide by a demilitarized zone between the two countries 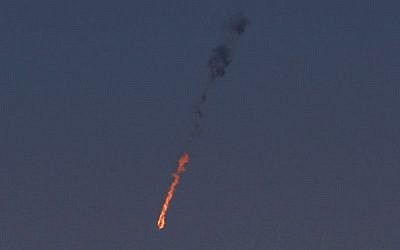 A Syrian fighter jet is seen in flames after it was hit by the Israeli military over the Golan Heights on September 23, 2014. (photo credit: AFP/JALAA MAREY)

This was the first time that Israel shot down a Syrian fighter jet since 2014, when another Russian-made Sukhoi fighter jet entered Israeli airspace and was targeted with a Patriot missile.

“Israel has a very clear policy: No plane, and certainly not a Syrian plane, is allowed to enter our airspace” without the appropriate authorization, Israel’s former Military Intelligence chief Amos Yadlin told Army Radio soon after Tuesday’s incident. “Any plane identified as an enemy plane is shot down,” he said.

In February of this year, the Syrian military shot down an Israeli F-16 fighter jet as it was taking part in a bombing raid against an Iranian-linked airfield in central Syria after an Iranian drone penetrated Israeli airspace, according to the IDF. The F-16’s pilot and navigator were injured as they bailed out of the aircraft, which crashed to ground in northern Israel.

Tuesday’s breach of Israeli airspace and the interception set off incoming rocket alert sirens throughout northeastern Israel, sending thousands of residents rushing to bomb shelters for the second day in a row. 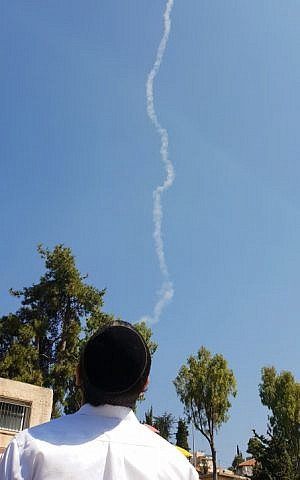 An Israeli man watches the smoke trail of a David’s Sling interceptor missile in the northern Israeli city of Safed after the interceptor was fired toward a Syrian SS-21 missile, on July 23, 2018. (David Cohen/Flash90)

The Safed municipality told residents that air defense systems in the area had fired interceptor missiles and said there were no special safety instructions in light of the situation.

The alarms could be heard in the Golan Heights and Jordan Valley regions, the army said.

The sirens came a day after Israel launched two David’s Sling interceptor missiles at a pair of Syrian surface-to-surface missiles carrying approximately a half ton of explosives each that appeared to be heading toward Israel, but ultimately landed inside Syria. The Israeli interceptors did not strike the Syrian missiles: one was self-detonated by the IAF; the second reportedly fell to earth inside Syria.

The military’s air defense systems that detect and track incoming missiles and rockets are less accurate immediately after a projectile is launched, as they have less information on its trajectory. As the missile or rocket flies, the systems can better predict where it is likely to land.

Monday’s incident, which ultimately turned out to have been a false alarm, was the first known operational use of the David’s Sling system, which was declared operational last year.

In recent weeks, sirens in northern Israel have been triggered by the military shooting down unmanned aerial vehicles entering Israeli airspace from Syria.

On July 13, the Israeli military used an anti-aircraft Patriot missile to shoot down a Syrian army drone that was flying over the demilitarized zone separating Israel from Syria. Two days earlier, a Syrian military unmanned aerial vehicle penetrated some 10 kilometers (six miles) into Israeli territory before it too was shot down by a Patriot missile. The IDF said it had allowed the drone to fly so deeply into Israeli territory as it was not immediately clear if it belonged to the Russian military.