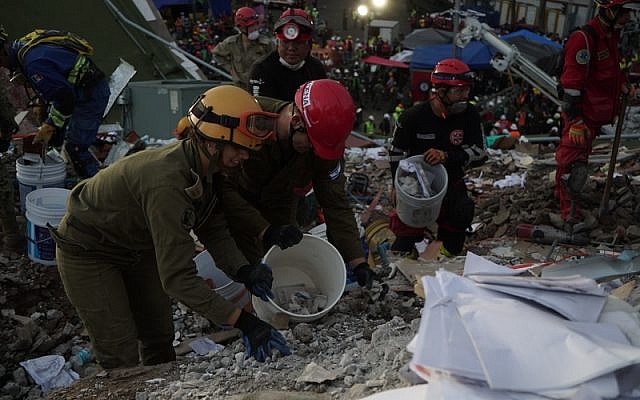 IDF soldiers search for survivors in a building that collapsed during an earthquake that struck Mexico on September 24, 2017. (Israel Defense Forces)

After a series of minor tremors rattled northern Israel over the last two weeks, experts warned that the country is negligently unprepared for a major earthquake that would likely kill thousands of people, including many children.

“The threat of an earthquake, is in my eyes, the greatest threat facing the state of Israel,” geologist Ariel Heimann told Hadashot news on Friday. “It is definitely a greater threat than the Qassam [rockets] fired from Gaza, and it is a far greater danger than the Iranian threat.”

Israel sits on the Syrian-African rift, a tear in the earth’s crust running the length of the border separating Israel and Jordan, and is part of the Great Rift Valley, which extends from northern Syria to Mozambique.

The last major earthquake to hit the region was in 1927 — a 6.2-magnitude tremor that killed 500 people and injured another 700. And experts have warned Israel is due for a major quake in the near future.

“If, God forbid, we have an earthquake like this, it will leave thousands dead and hundreds of thousands of people will have to leave their homes. Houses will be destroyed, there will be massive economic damage that will set the country back dozens of years,” Heimann warned.

Another expert said school children were particularly vulnerable, pointing to a recent report that out of 1,600 schools deemed to be in danger of collapsing in a survey three years ago, just 53 have since been reinforced. 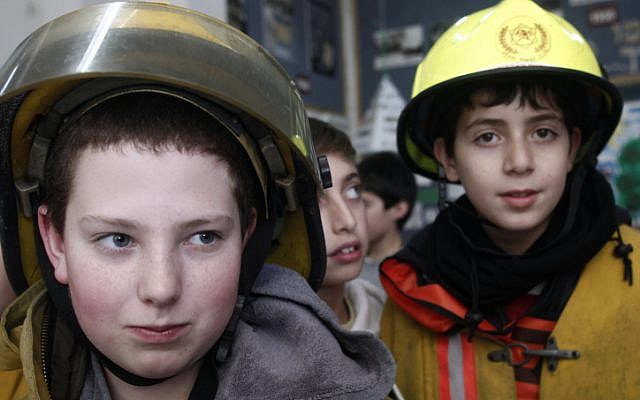 Col. Itzik Bar from the IDF’s Home Front Command, put expected casualties from a major quake at 7,000 dead and 200,000 homeless.

“Apparently it will unfortunately take a mid-sized quake with 100-200 casualties to make this country wake up and seriously prepare,” he told Hadashot.

A minor earthquake hit northern Israel on Monday evening, bringing the number of tremors in the area in recent days to more than 40, further fueling fears that a major earthquake could be on its way. 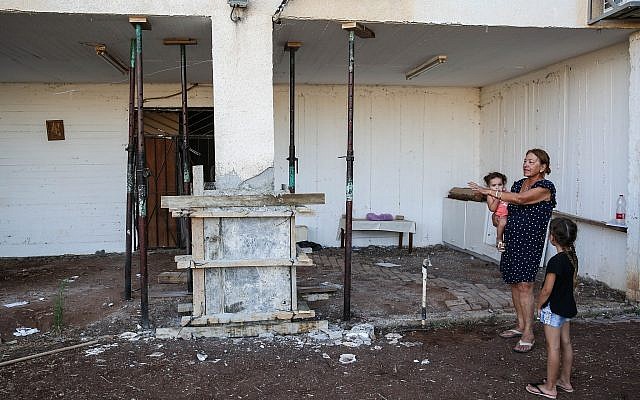 View of damage caused to houses in northern Israel, after earthquakes shook the area, on July 9, 2018. (David Cohen/Flash90)

The epicenter of the 3.2 quake was at the northern edge of the Sea of Galilee, similar to the previous ones. It hit at 6:15 p.m. without causing damage or casualties.

But despite the looming threat, new details show that the government has been making very little progress in preparing for a strong tremor and strengthening structures.

None of the 108 dangerous material factories, ordered two years ago by the Ministry of Environmental Protection to strengthen their structures, has completed the process, an earlier Hadashot news report said. Only one factory has presented a plan to implement the decision. The ministry said it was behind schedule, due to a “severe shortage of manpower.”

A nationwide early warning system approved in 2012 only began its deployment a year ago. The Geological Survey of Israel has only deployed 55 of the 120 alert stations, none of which are operational.

But sounding dire warnings appears to have little effect. Previous warnings have fallen on deaf ears.

A State Comptroller report in 2001 found that no funding had been allocated for strengthening buildings and infrastructure. It was followed by another report in 2004, which said that not much had been done in the intervening years, due to spats between ministries over responsibility for the work.

An inter-ministerial committee set up in 2004 proposed making preparations for a 7.5 magnitude quake to the country’s north, with catastrophic loss of life and severe damage to infrastructure. It raised the prospect of 16,000 dead and nearly 100,000 wounded in such an event, with 10,000 buildings destroyed.

In 2011, another state comptroller report sounded further warnings about the threat to northern communities and infrastructure from an earthquake, and once again lamented the dearth of precautionary measures taken.

Defense Minister Avigdor Liberman announced last week that a new multi-year plan to protect Israel from earthquakes will be presented to the cabinet this month.