Dublin, Ireland (CNN)Ireland has voted an emphatic “Yes” to amend the country’s constitution to enable legislation that would allow women to have an abortion in a historic and emotionally charged referendum.

With a high turnout of 64.13%, 1,429,98, or 66.4%, voted for the amendment Friday and 723,632, or 33.6%, against, according to the country’s Referendum Commission. The results that were announced Saturday defied earlier projections that it would be a tight race.
Only one county voted no — the rural and religiously conservative Donegal in northwest Ireland.
The vote signifies a resounding victory for the government of Leo Varadkar, the Prime Minister, or Taoiseach as the office is called in Ireland.
“Today is a historic day for Ireland,” Varadkar said at a press conference. “A quiet revolution has taken place, and today is a great act of democracy.”
“A hundred years since women gained the right to vote, today we as a people have spoken,” he said. “And we say that we trust women and respect women to make their own decisions and their own choices.”
He noted that people in “almost every county, almost every constituency, men and women, all social classes and almost all age groups” voted to repeal the amendment. “We are not a divided country,” he said.
Chants of “Yes we did” rose from the crowd as the Referendum Commission’s Returning Officer Barry Ryan announced the final results. 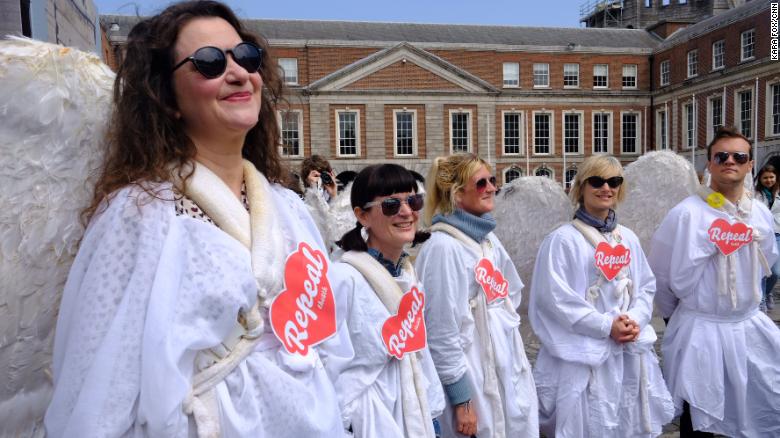 “Yes” supporters wait for the final results Saturday at Dublin Castle.
It was a scene of jubilation as some supporters burst into tears. Others began laughing as they hugged one another and asked each other, “Can you believe we did this?”
Emma Gallagher, 22, began crying as she heard the final results.
“I feel safe now, I feel comfortable,” she told CNN. “It felt for a long time women didn’t matter. … Now we know that we matter.”
Rene Wogan, 66, held Gallagher’s hand and told her, “It was all for justice. You’re forwarding the flag on for women.”
Thousands of people packed the square in front of Dublin Castle as abortion rights politicians, including Varadkar, also joined the celebration.
He told Sky TV he expected legislation to be voted through by the end of the year.
“I feel enormous relief and great pride in the people of Ireland who didn’t maybe know what they thought until they were finally asked the questions,” Ailbhe Smyth, a longtime women’s rights activist, told CNN.
“It has been a long and very hard road, but we never lost sight of this because it’s so central to the existence, and the selfhood and personhood of women to have that control of our own bodies.” 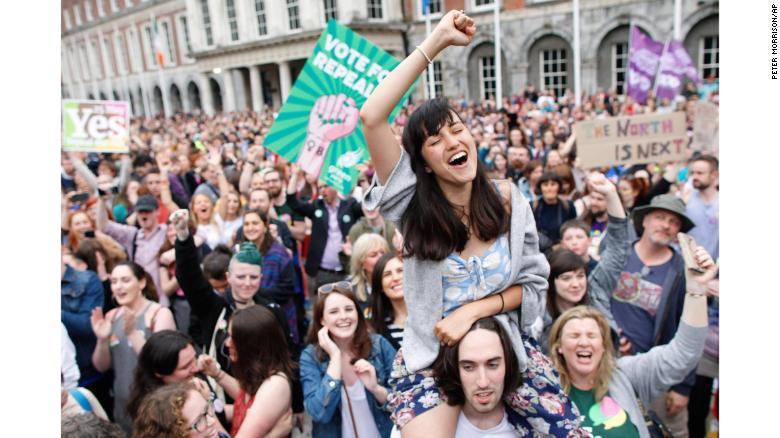 A woman from the “Yes” campaign reacts after final results were announced Saturday at Dublin Castle.
The Eighth Amendment, which was added to the constitution following a referendum in 1983, banned abortion in Ireland unless there was a “real and substantial risk” to the mother’s life.
Repeal of the amendment has completed a circle of sweeping social reforms in the European Union nation that fly in the face of the traditional teachings of the Catholic Church, from contraception to divorce, and most recently same-sex marriage.
Roscommon, in the rural interior, the only county to say no to same-sex marriage, also voted yes in the abortion referendum.
Thousands of Irish working abroad returned to Ireland to cast their vote.

This is my mam. It took 38 years for us to find each other again. The last time she saw me was when she was running after a car as nuns drove away with me.
We voted yes.
We stand together for change.#repealThe8th #repealedThe8th

Twitter Ads info and privacy
Those opposed to abortion vowed Saturday to take their fight now to the Irish Parliament, where lawmakers will have to bring about legislation allowing for terminations in the first 12 weeks of pregnancy — and later in cases where there is a risk to the mother’s life or the fetus is not expected to survive.
Dr. Ruth Cullen, spokeswoman for the anti-abortion LoveBoth campaign, conceded defeat Saturday before the count had finished.
“We will hold the Taoiseach to his promise that repeal would only lead to abortion in very restrictive circumstances. He gave his word on this, now he must deliver on it. No doubt many people voted for repeal based on the Taoiseach’s promises in this regard,” Cullen said at a press conference Saturday.
The death of an Indian dentist ignited the abortion rights campaign in Ireland. Savita Halappanavar, 31, died in 2012 because of complications from a natural miscarriage after abortion was denied to her. 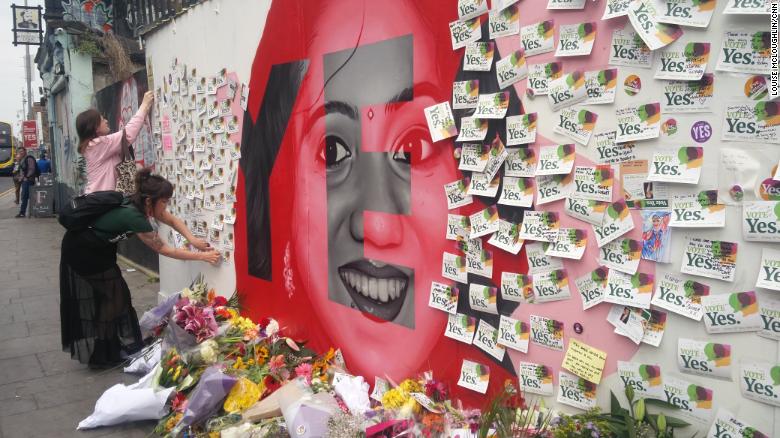 Repeal supporters leave notes at a mural of Savita Halappanavar, whose death sparked the campaign.
Voters over 65 were the only age group overall not supporting the repeal of the amendment.
Ireland’s vote will likely put pressure on Northern Ireland to change its abortion laws, too. Despite Northern Ireland being part of the UK, the 1967 Abortion Act legalizing abortions never applied there, and even victims of rape and incest are forced to travel to mainland Britain if they want a termination.