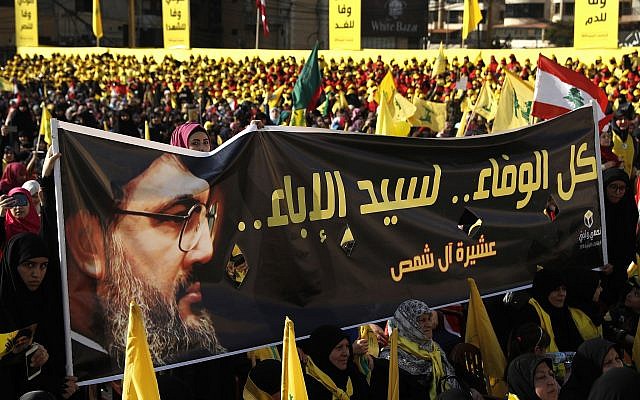 In this Friday, April 13, 2018 file photo, supporters of Hezbollah leader Hassan Nasrallah hold a banner with his portrait and Arabic words that reads: ‘All the loyalty to the man of nobility,’ during an election campaign speech, in a southern suburb of Beirut, Lebanon. (AP/Hussein Malla)

BEIRUT  — Few countries are as vulnerable to the Middle East’s mayhem as Lebanon, which has taken in a million refugees from the catastrophic war in neighboring Syria, seen the Iran-backed Lebanese Hezbollah terror group embroiled in that war and watched Saudi Arabia try to oust its prime minister.

Yet campaigning for Sunday’s parliamentary election, the first in nine years, has timidly sidestepped the big issues, leaving many Lebanese expecting more of the same. It’s especially galling for Lebanese concerned a still-dominant Hezbollah could drag the country into a looming Iran-Israel regional confrontation.

The vote is expected to be a test for the country’s Western-backed Sunni prime minister, Saad Hariri, and his Iran-backed Shiite opponent, Hezbollah, which is looking to tighten its grip and expand its presence in the 128-seat parliament — likely at Hariri’s expense.

Interior Minister Nouhad Mashnouk, a member of Hariri’s inner circle, said the election is not “a Sunni-Shiite conflict but rather a conflict between a group that believes in a state and a nation, and another that has regional and Iranian leanings.”

The sides, however, can hardly govern effectively without each other and are expected to recreate the unity government that currently exists, which incorporates members of the militant group. 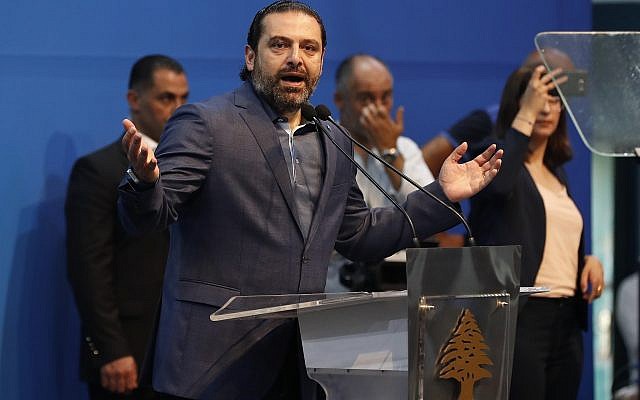 In this picture taken on Tuesday, May 1, 2018, Lebanese Prime Minister Saad Hariri who is a candidate for the parliamentary elections which will be held on May 6, addresses a speech during an elections campaign, in Beirut, Lebanon. (AP Photo/Hussein Malla)

Most of the campaigning by more than 500 candidates has revolved around platforms of stability and economic growth, with many of Lebanon’s civil war-era political titans set to return, including Lebanon’s aging Shiite parliament speaker, Nabih Berri, a Hezbollah ally who has held the post for more than 25 years and who is virtually uncontested. Some warlords are passing on their seats to their sons, including Druze leader Walid Jumblatt.

“Divisive issues such as Hezbollah’s weapons and the controversy over its participation in regional conflicts are almost entirely absent from the electoral campaigns, indicating implicit acceptance of the party’s domestic hegemony,” wrote analyst Joseph Bahout in an article for the Carnegie Middle East Center.

A new election law agreed on last year has opened cracks through which rivals within the Shiite community could potentially challenge Hezbollah, and political newcomers and independents could try to break through the monopoly long enjoyed by the political dynasties.

It also promises to shake things up by reorganizing Lebanon’s electoral map, consolidating 23 districts into 15, and awarding seats by share of the vote received, rather than winner-takes-all. The law also allows Lebanese expatriates to vote abroad for the first time, adding a new level of unpredictability to the mix.

The last time elections were held in Lebanon was in 2009. Since then, members of parliament have extended their terms twice, citing security threats linked to the war in neighboring Syria. 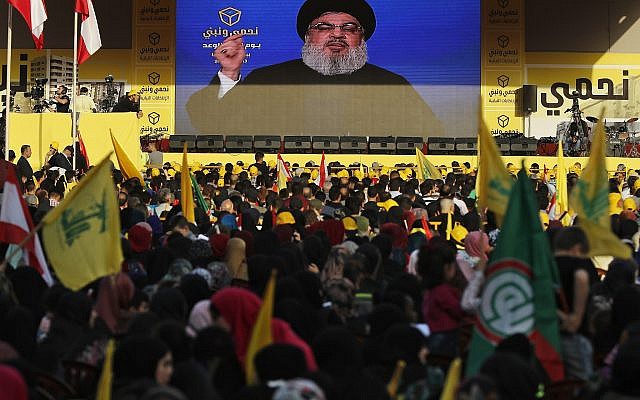 In this Friday, April 13, 2018 file photo, Hezbollah leader Hassan Nasrallah delivers a broadcast speech through a giant screen during an election campaign in a southern suburb of Beirut, Lebanon. (AP Photo/Hussein Malla)

Lebanon is technically a parliamentary democracy but is shackled by a decades-old sectarian-based power-sharing system, and its politics are dominated by former warlords that have long exploited the system to perpetuate corruption and nepotism. All senior government positions are allocated according to sect, including the head of state, who should be a Christian, the prime minister, a Sunni Muslim, and the parliament speaker, a Shiite. Parliament is divided equally between Christians and Muslims, with seats allotted according to religious sect.

The formula, based on outdated demographic data that does not account for nearly 200,000 Palestinians who are denied citizenship and a vote, allows people to vote according to their religious affiliations, not a political program.

A record number of first-time hopefuls are campaigning for change, urging voters to shun politicians who have drowned the country in corruption and debt. Many rose to prominence as organizers of protests over a 2015 trash collection crisis that left garbage in the streets for months and laid bare the extent of the public sector mismanagement plaguing Lebanon.

“It reflects a new mindset emerging among significant sectors of the Lebanese electorate, pointing in the direction of making a small dent in the religious sect-based political system,” said Randa Slim, an analyst with the Washington-based Middle East Institute. 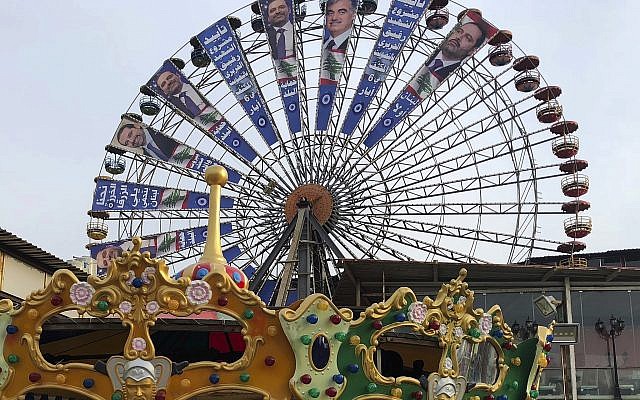 In this Sunday, April 29, 2018 file photo, a luna park wheel decorated by posters that show portraits of former Lebanese Prime Minister Rafic Hariri and his son the current Prime Minister Saad Hariri who is a candidate for the parliamentary elections which will be held on May 6, in Beirut, Lebanon. (AP Photo/Hussein Malla)

Still, the biggest winner appears to be Hezbollah and its allies, who look set to scoop up at least some of the seats lost by Hariri’s coalition, largely because of the expected fragmentation of the Sunni vote.

Hariri now has the largest block in parliament, but is likely to lose seats to rival politicians. Some of Hariri’s supporters shifted their allegiance after the billionaire businessman, who also holds Saudi citizenship, laid off scores of employees in his development company, Saudi Oger, as well as in Hariri-owned charities and media outlets in Lebanon, largely because of Saudi spending cuts.

That loss of support has been compounded by what some see as a weak stance vis-a-vis Hezbollah, accusing him of catering to and giving political cover to the militant group, which a U.N.-backed tribunal has accused in the 2015 assassination of his father, Rafik Hariri.

Hezbollah offered its support to Hariri after he was detained in Saudi Arabia late last year during a visit to Riyadh in which he announced his resignation as prime minister, citing Iran and Hezbollah’s meddling in the region. The move was widely seen as Saudi coercion, although Hariri denies stepping down against his will and has since reversed his resignation.

Hezbollah now seeks, along with its allies, to win at least 43 seats in the 128-member legislature, which would enable the militant group to veto any laws it opposes.

Hezbollah has sent thousands of fighters to Syria to shore up President Bashar Assad, and has cleared the vast region along the countries’ shared border of Islamic militants, leaving hundreds of its fighters killed and wounded. It is now campaigning heavily on those achievements.

Its leader, Sheikh Hassan Nasrallah, called for a heavy voter turnout, particularly in the Baalbek-Hermel region in eastern Lebanon, traditionally a Hezbollah stronghold which now faces a challenge from rivals.

“You should protect with your votes your victories and achievements, for which you’ve paid a very high price,” Nasrallah said in an appeal to supporters at an election rally in the area on Monday.

She expects a governing coalition between Hariri and Hezbollah to re-emerge from Sunday’s vote and says if the elections produce a weaker Hariri, it will be all the more reason for Hezbollah to push for him to be the next prime minister.

“In light of the talk of a looming Iranian-Israeli confrontation in Syria, Hezbollah will be more incentivized in not rocking the boat in Lebanon,” she said.