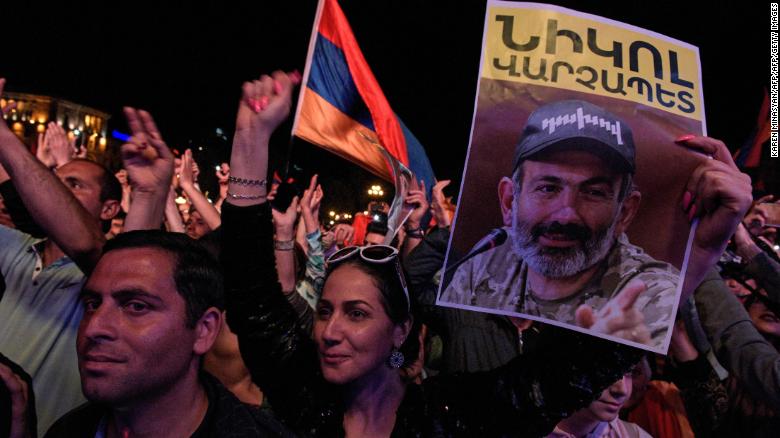 (CNN)Armenia was thrown into political turmoil on Tuesday after Parliament failed to agree on a replacement prime minister for Serzh Sargsyan, who stepped down last week amid mass demonstrations.

Protest leader Nikol Pashinyan, 42, was the sole candidate in the parliamentary vote, but failed to get a majority backing.
Shortly after the vote, Pashinyan told thousands of supporters at a rally in the capital Yerevan that their struggle was far from over, and called for a strike the next day.
“Our counter-move against the action of the Republican faction will be very rapid. Tomorrow total strike is declared,” Pashinyan said, according to state-run Armenpress. “We block all the streets, communications, subway and the airports starting from 8:15. Our struggle cannot end in a failure.” 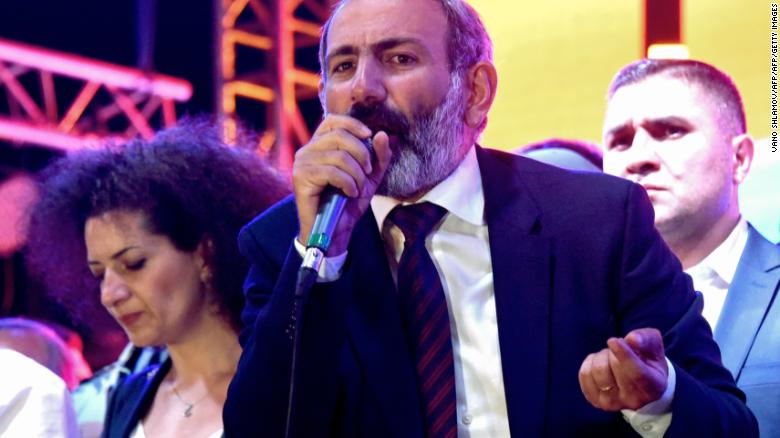 Nikol Pashinyan addresses supporters in downtown Yerevan.
Pashinyan needed 53 votes to be elected, but received 45, Armenpress reported. According to the news outlet, if Pashinyan is not elected in the second round, Parliament will be dissolved.
As the vote took place, thousands of Pashinyan’s supporters flooded into Yerevan’s Republic Square, watching the Parliament session on giant screens.
Many had hoped Pashinyan would fill the power vacuum left after Sargsyan resigned, following weeks of anti-government protests. 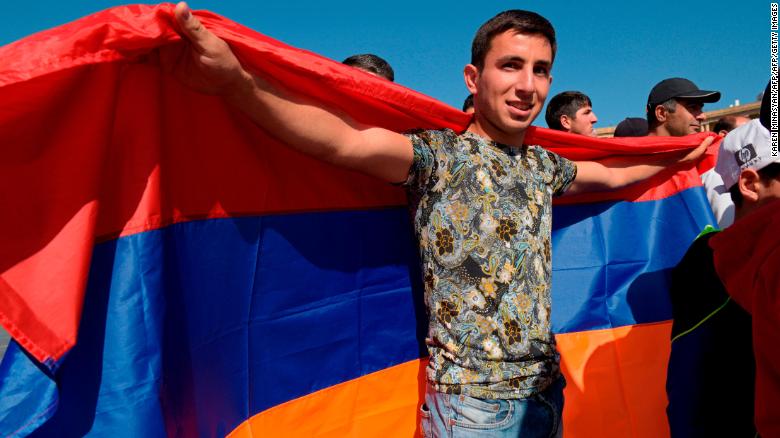 A Pashinyan supporter in Yerevan, ahead of the vote.
The European Union urged civility.
“It remains crucial that all parties involved, including the law enforcement agencies and those exercising their right of freedom of assembly and expression, avoid confrontation and show restraint and responsibility, as has been the case in recent days,” the EU said in statement on its website.
Pashinyan led the protests after Sargsyan was appointed Prime Minister on April 17. Sargsyan had previously served as Armenian president for 10 years, and the thousands of protesters who hit the streets of Yerevan saw his latest appointment as an unconstitutional power grab.
Under constitutional changes Sargsyan promoted in 2015, the prime minister became more powerful than the president, leading to concerns of authoritarian rule descending on the small former Soviet republic, which borders Azerbaijan, Turkey, Iran and Georgia.
As the protests entered their 11th day, Sargsyan stepped down as Prime Minister.
His deputy, Karen Karapetyan, was then named acting Prime Minister at an emergency Cabinet meeting. 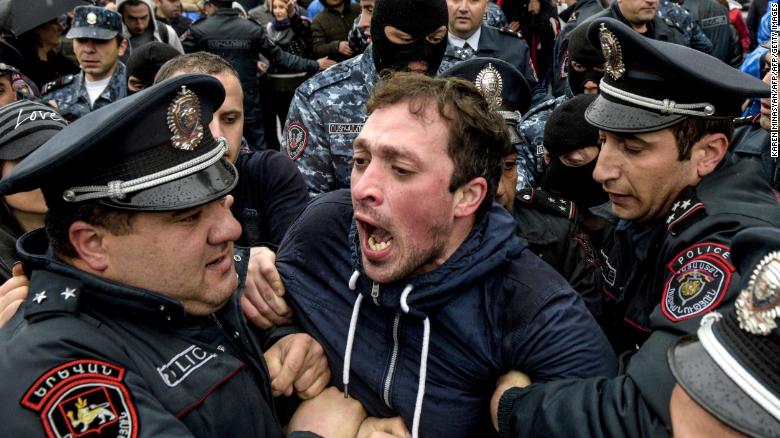 Armenian policemen detain an opposition supporter during a rally in Yerevan on April 21.
Pashinyan, of the opposition Civil Contract party, cut a rebellious figure during the protests. His black cap, camouflage T-shirt and bandaged hand, reportedly injured on barbed wire, were in stark contrast to the suited Prime Minister Sargsyan.
A televised meeting between the two leaders at the Marriott Hotel in Yerevan two weeks ago dramatically broke down when the Prime Minister walked out.
Shortly after, Pashinyan was arrested at an anti-government rally, but was released last Monday before the announcement that Sargsyan would resign. 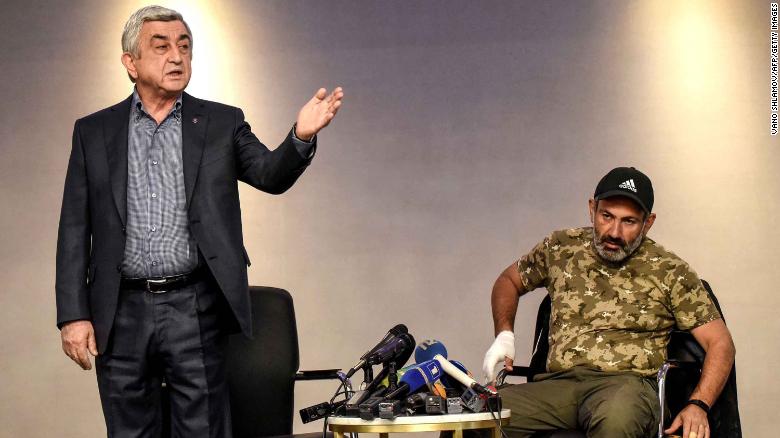 Former Armenian Prime Minister Serzh Sargsyan during the televised meeting with Nikol Pashinyan last month.
According to Laurence Broers, an associate fellow at the Chatham House think tank’s Russia and Eurasia program, discontent with Sargsyan had been brewing for years.
Armenians have seen their country, once the poster child for democratization after the collapse of the Soviet Union, stagnate in the hands of an entrenched oligarchy while many citizens choose to leave, Broers said.
Broers doesn’t ascribe sole credit to Pashinyan for the latest protests, but said the opposition figure “has been very successful in harnessing that desire and that energy for change.”
The crunch now, Broers said, is whether Pashinyan can turn his hand to coalition-building skills.