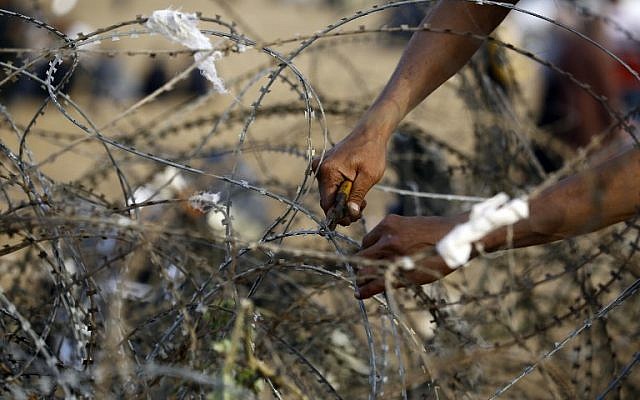 A Palestinian man tries to cut through a section of barbed wire at the border fence with Israel, east of Jabalia in the central Gaza city, during a protest on April 13, 2018 (AFP PHOTO / MOHAMMED ABED)

Senior Egyptian intelligence officials who visited the Gaza Strip on Saturday reportedly asked Hamas leaders to halt the weekly mass demonstrations along the border with Israel.

The Egyptian delegation, headed by Sameh Nabil, who is in charge of the Palestinian portfolio in Egypt’s General Intelligence Service, entered the Gaza Strip through the Erez border crossing with Israel.

A Palestinian Authority official in Ramallah said that the Egyptian officials demanded during their talks with Hamas leaders in Gaza City that the terror group end the protests, which began three weeks ago as part of the so-called March of Return.

Egypt has refused to open the Rafah border crossing with the Gaza Strip on a permanent basis, a decision that has drawn sharp criticism from Palestinians living in the coastal enclave.

Unconfirmed reports in a number of Arab media outlets in the past few days said that Egypt has been pressuring Hamas to halt the “March of Return” in exchange for easing travel restrictions at the Rafah crossing.

Adel Abed Al Rahman, spokesperson for the Egyptian delegation that visited the Gaza Strip, said that the talks with the Hamas leaders focused on the issue of “reconciliation” between the terror group and Mahmoud Abbas’s ruling Fatah faction. 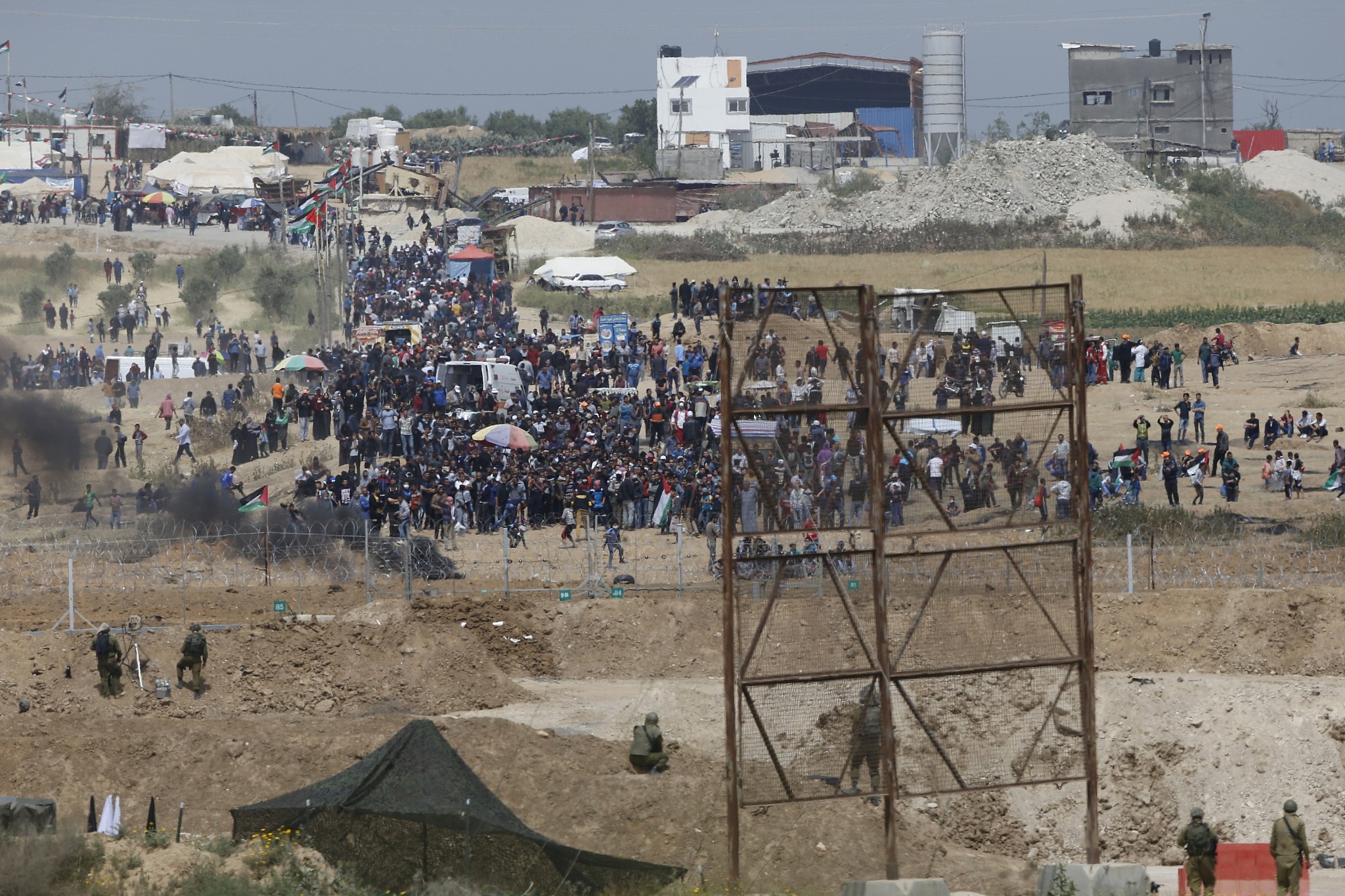 Hamas and Fatah signed a reconciliation agreement in Cairo in October 2017 in which they pledged to end their differences and pave the way for achieving Palestinian unity. However, the two rival parties have since failed to reach understandings on the implementation of the Egyptian-brokered deal, and continue to hold each other responsible for its failure.

Abbas has accused Hamas of failing to hand full control of the Gaza Strip over to his Ramallah-based government. He has also threatened to impose new sanctions on Hamas unless it complies with his demands.

Hamas, for its part, has accused Abbas of failing to lift sanctions he imposed on the Gaza Strip last year, including suspending payments to thousands of civil servants. Hamas has also rejected Abbas’s demand to allow his security forces to deploy in the Gaza Strip.

Egyptian intelligence officials who were trying to mediate between Hamas and Fatah left the Gaza Strip shortly after last month’s attempt on the life of Rami Hamdallah, the PA prime minister. Hamdallah’s convoy was targeted by a roadside bomb as he was on his way to inaugurate a water waste plant in the northern Gaza Strip. Neither he nor PA General Intelligence Chief Majed Faraj, who was also in the convoy, were hurt.

Hamas officials refused to comment on the claim that the Egyptians were pressuring them to halt the “March of Return.”

However, shortly after the Egyptian officials left the Gaza Strip, Khalil al-Hayya, a senior Hamas official, announced that the mass demonstrations would continue “until they achieve their real goals.”

The protests, Hayya said, will continue until May 15, when Palestinians mark Nakba Day, the Gregorian calendar date for Israel Independence Day.

“Our Palestinian people will continue the marches and the intifada against the Israeli occupation until they achieve the right of return,” Hayya said, referring to the demand that Israel allow Palestinian refugees and their descendants to return to their former homes inside Israel. 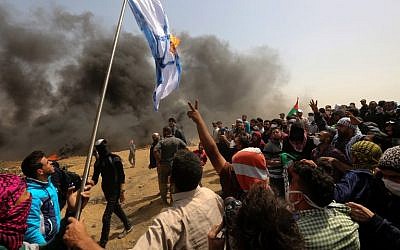 Palestinian protesters burn an Israeli flag during clashes with Israeli forces near the border with Israel, east of Gaza city in the central Gaza strip, on April 13, 2018. (/ AFP PHOTO / MAHMUD HAMS )

“The burning of the Israeli flag [during the third Friday of the demonstrations] is proof that we don’t recognize this flag and its owners.”

On Friday, at least 10,000 Gazans took part in large-scale demonstrations, with the Israeli military saying protesters hurled an explosive device and firebombs at Israeli troops deployed at the border, as well as making “several attempts” to damage the fence between Israel and Gaza and cross over into Israeli territory.

Last Friday, about 20,000 Palestinians took part in the demonstrations, with the previous week attracting an estimated 30,000.

More than 30 Palestinians have been killed in the clashes over the part three weeks, according to Hamas-run health authorities. Hamas has acknowledged that several of those killed were its members, and Israel has identified other fatalities as members of terrorist groups.

Times of Israel staff and agencies contributed to this report.