Trump calls out Sessions over ‘disgraceful’ handling of FISA probe

The scathing tweet is the latest in a long line of public rebukes the President has leveled against his attorney general, a man who broke with much of his party to endorse Trump early in his presidential run.
“Why is A.G. Jeff Sessions asking the Inspector General to investigate potentially massive FISA abuse. Will take forever, has no prosecutorial power and already late with reports on Comey etc,” Trump wrote. “Isn’t the I.G. an Obama guy? Why not use Justice Department lawyers? DISGRACEFUL!”

Why is A.G. Jeff Sessions asking the Inspector General to investigate potentially massive FISA abuse. Will take forever, has no prosecutorial power and already late with reports on Comey etc. Isn’t the I.G. an Obama guy? Why not use Justice Department lawyers? DISGRACEFUL!

Sessions said Tuesday that the Justice Department is looking at whether the FBI has properly handled applications for surveillance orders under the Foreign Intelligence Surveillance Act.
Sessions, appearing at a news conference announcing a new opioid task force, was asked about House Intelligence Chairman Devin Nunes’ controversial memo outlining purported surveillance abuses and told reporters that “the inspector general will take that as one of the matters he’ll deal with.”
The Justice Department’s inspector general is Michael E. Horowitz, a longtime department official who has worked under Republican and Democrat administrations. He was confirmed for the inspector general job in 2012 under then-President Barack Obama.
While Trump is correct that Horowitz does not have prosecutorial powers, he can — and often does — make criminal referrals to the Justice Department based on his investigations. An investigation into improper FISA use would fall squarely onto Horowitz, too, given his charge instructs him to “investigate alleged violations of criminal and civil laws by DOJ employee.” 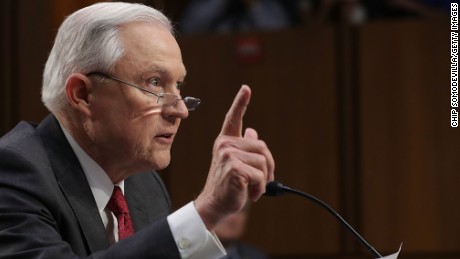 Trump’s anger toward Sessions stems from his decision to recuse himself from all investigations into the 2016 campaign, including special counsel Robert Mueller’s expanding investigation into collusion between the Trump campaign and Russian operatives bent on meddling in the election. Sessions made that decision after he did not fully answer questions during his confirmation hearing about his conversations with Russian diplomats during the 2016 campaign. Trump, in turn, has said he wouldn’t have named Sessions to lead the Justice Department had he known he would have recused himself.
That animosity has played out publicly ever since.
Trump pestered Sessions for not looking into Hillary Clinton’s deleted emails, slammed him for being “very weak” on Clinton’s “crimes” and labeled him “beleaguered” in July.
As pressure mounted on Sessions last year, his standing in the administration appeared untenable to people inside the West Wing. During the first six months of Trump’s presidency, Trump asked for Sessions’ resignation, called the attorney general an “idiot” but then later declined to accept his attorney general’s resignation letter.
Sessions has so far weathered the incessant incoming from the White House and sources close to the attorney general have told CNN that he is unlikely to go anywhere soon. But the saga between the two top Republicans has played out in public for much of Trump’s first year in office and the President’s chronic antipathy towards the top law enforcement official has defined Trump’s view of the Justice Department.
Trump’s anger boiled over in June, too, when the President pushed then-chief of staff Reince Priebus to obtain Sessions’ resignation, according sources familiar with the exchange. Priebus later said that he talked Trump out of the firing.
The latest chapter in the saga between Trump and Sessions came just one week ago, when Trump challenged Sessions to launch an investigation into the Obama administration for failing to do enough to stop the 2016 election foreign interference.
“Question: If all of the Russian meddling took place during the Obama Administration, right up to January 20th, why aren’t they the subject of the investigation?” Trump asked. “Why didn’t Obama do something about the meddling? Why aren’t Dem crimes under investigation? Ask Jeff Sessions!”