As the World Celebrates Bob Marley Day, Reggae is Changing and So Are Its Fans 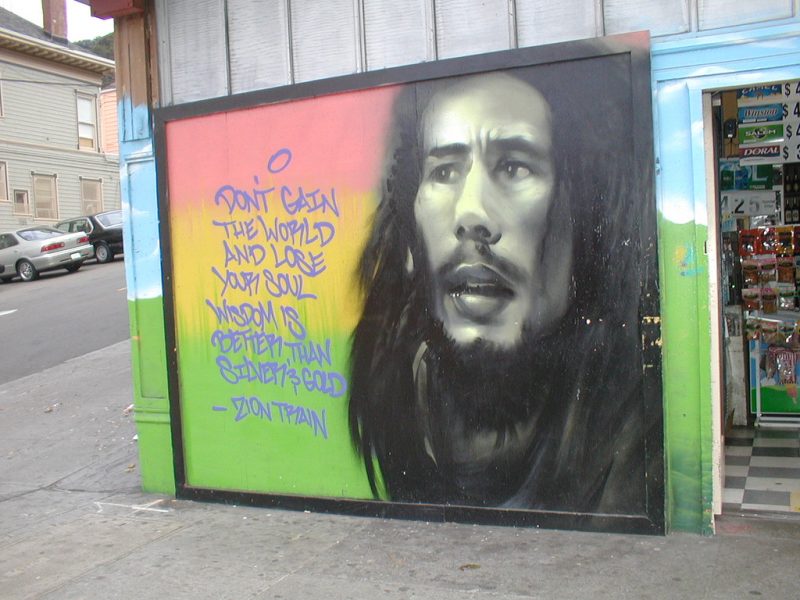 Reggae icon Bob (Robert Nesta) Marley was born on February 6, 1945; his birthday is now celebrated around the world as Bob Marley Day. This year, he would have turned 73 years old. Marley’s hometown of Kingston, Jamaica, is now recognised by UNESCO as a Creative City of Music.

As the anointed birthplace of reggae music, music-lovers from all over the world make the pilgrimage to the Bob Marley Museum in uptown Kingston, the site of Marley’s former home. Visitors also head downtown to tour Tuff Gong Studios, founded by Marley in 1965, and the “Culture Yard” in Trench Town, where Marley grew up, learned to play guitar and formed his band, the Wailers.

Bob Marley remains an enduring icon and legacy in Jamaica, but as musical tastes and trends change, some Jamaicans wonder if the spirit of traditional roots reggae may be fading.

Reggae Month, first announced by the Jamaican government in 2008, is currently underway in Jamaica.

While passing by Marley’s former home, a fan tweeted a photo of the festivities celebrating Bob Marley Day: 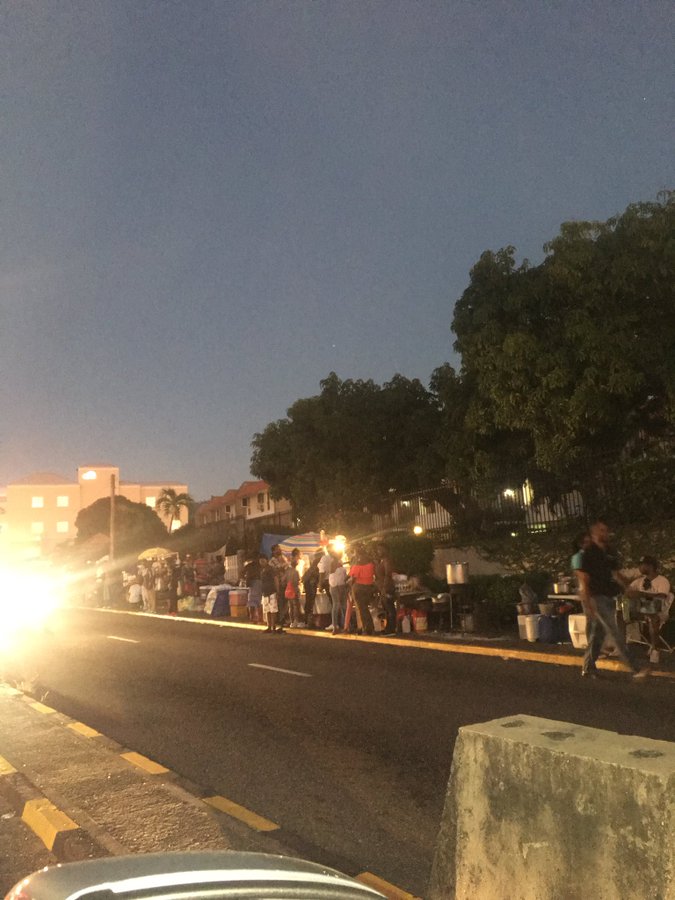 The museum itself shared a live stream: 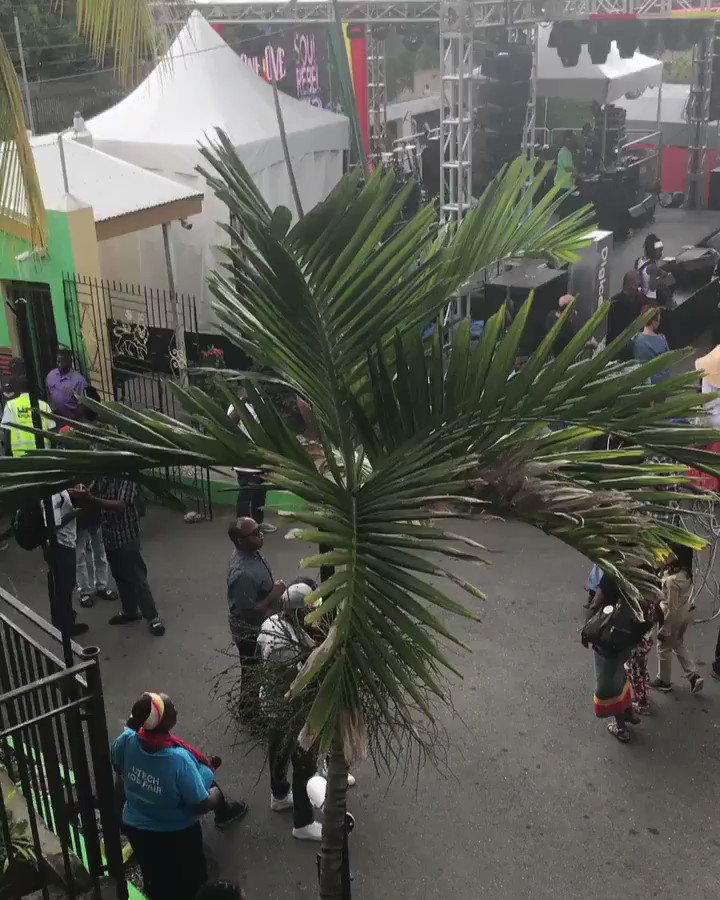 Happening Now! Tune into our Live Feed at http://www.bobmarleymuseum.com

We are celebrating Bob Marley’s Earthstrong Celebration: #SoulRebel73 here at the @bobmarleymuseum 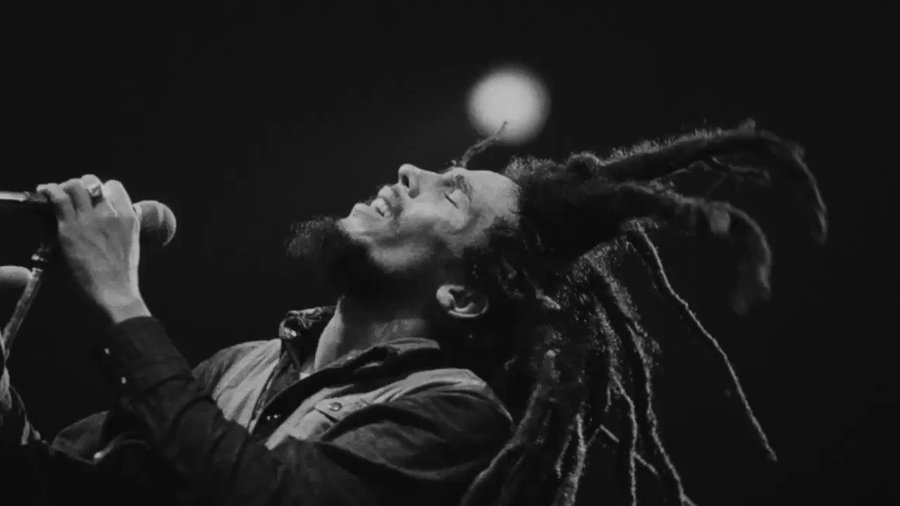 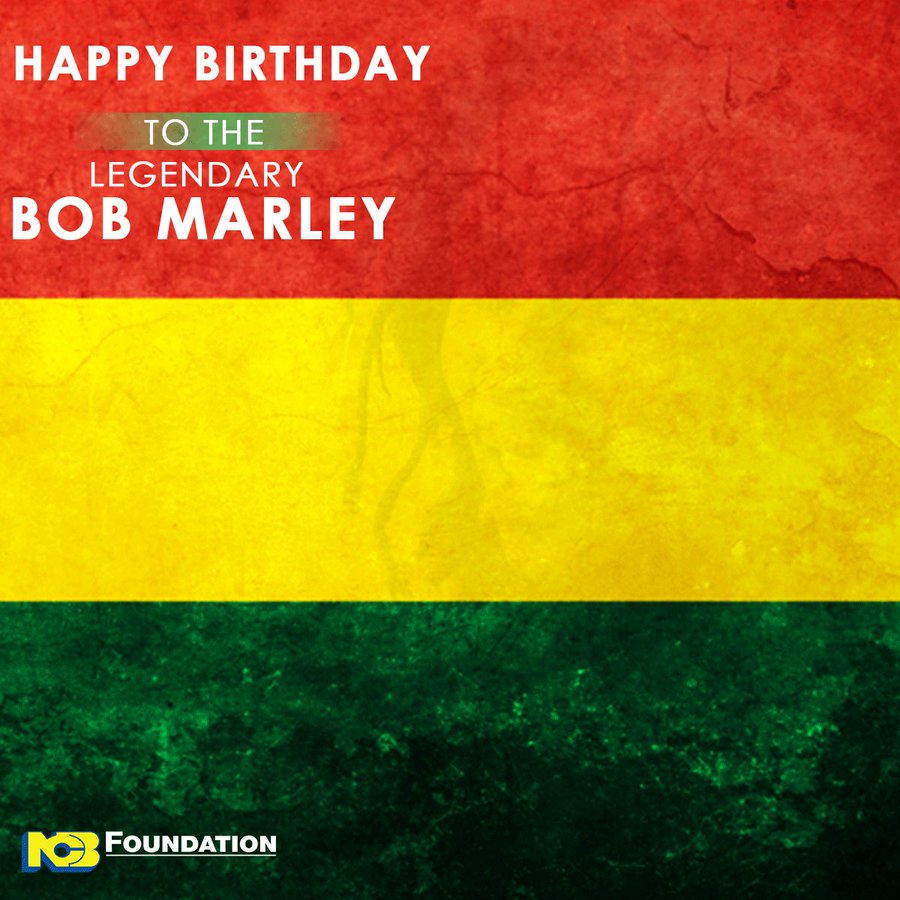 “Open your eyes, look within. Are you satisfied with the life you’re living?” -Bob Marley#bobmarleyday #BobMarleyquotes #HappyBirthday

AK Dixon, a Jamaican living in Toronto, Canada, where Bob Marley Day is annually celebrated, urged Jamaica to step up its game:

Today should have been a National Holiday…. #BobMarleyDay

The American rapper Common added his birthday wishes on Twitter, acknowledging what he learned from Marley: 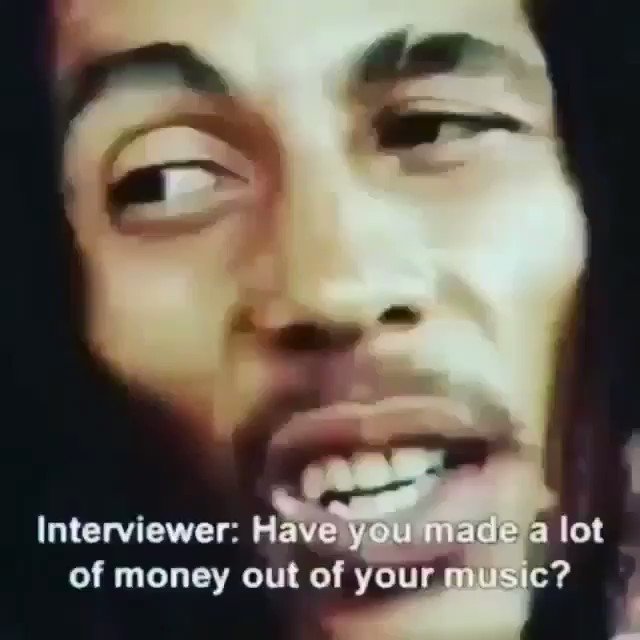 Happy Born Day Bob Marley! Thank you for showing me how to use my art to help the people. #OneLove 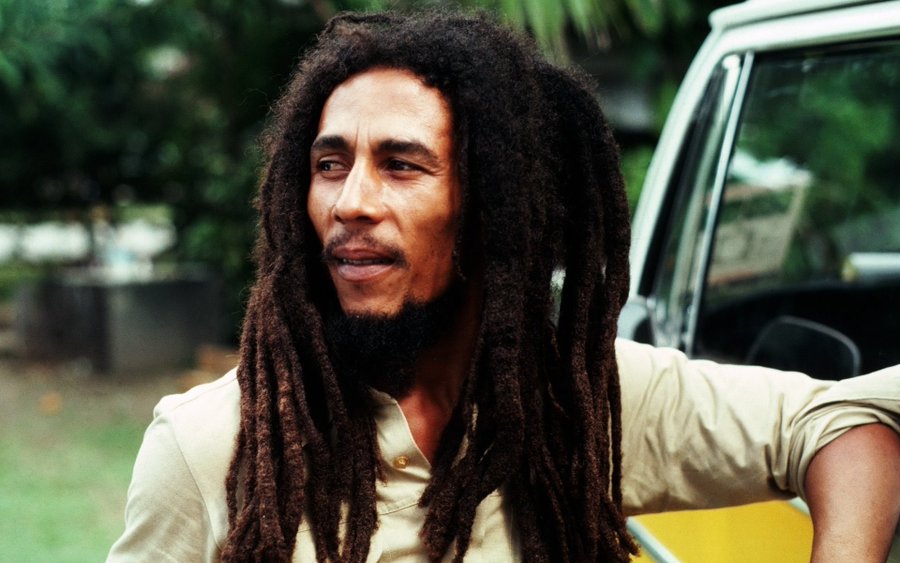 On the born day of Bob Marley we are reminded-

To mark the day, Damian “Junior Gong” Marley tweeted a charming childhood photograph of himself with his father: 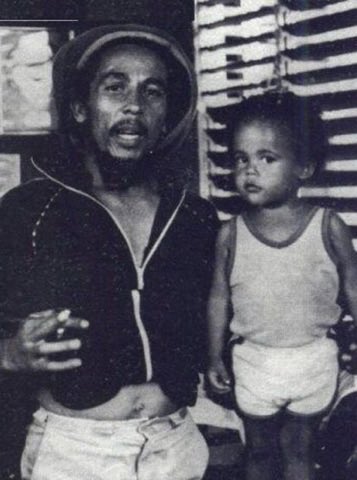 Winston Barnes, a Florida-based Jamaican who hosts a radio talk show for the diaspora, bemoaned a perceived declining interest in reggae music, blaming the embrace of Western music styles such as hip hop:

I am now convinced that Marley’s work was in vain. At least for Jamaicans. We know so little about what he did, as evidenced by our disrespect for his work and by extension our culture. Jamaica has many more radio stations than ever and cumulatively, they play less Jamaican music than before. This at a time when Jamaicans create and produce virtually every genre of music! What would we say to Bob if he was among us physically? I listened to a motivational feature on Jamaican radio last evening and virtually all the inserts originated from outside of Jamaica! In 2018?
Foreigners respect and regard Marley’s music, at least publicly more than we ever have even in 2018! I am now convinced that maybe it is too late to fix this problem we face as a country and as a culture…and then we turn around and talk rubbish about the Grammies and Reggae!

Barnes refers to complaints by Jamaicans that the Grammy Awards do not give enough credit to reggae music, since the award is not televised.

And last year when Raging Fyah’s Album “Everlasting” was nominated, same comments when Ziggy won. Maybe it is time for the Caribbean to have their own “Grammy” type of Ceremony.

It’s very unfortunate. Despite the fact that many reggae artists insist they don’t really care about the Grammys—in part because they know it’s a scam—the Grammys are one of the few places where reggae is recognized on the international stage. And, it clearly boosts record sales.

Many Jamaicans felt Chronixx, a young, up-and-coming reggae artist, should have won the Grammy instead of granting it to Damian “Jr. Gong” Marley. Of all the members of the Marley family, only a few live in Jamaica, while others occasionally visit. However, other social media users applauded Jr. Gong’s “Stony Hill” album as a quality contender:

The ‘Marley factor’ and the future of reggae

Dr. Sonijah Stanley Niaah, of the Institute of Caribbean Studies and Reggae Studies Unit at the University of the West Indies, explained the ‘Marley factor’:

Jamaica is this cool place on the world map that is hardly visible, but everyone knows of the little rock because of its musical legacy. When it comes to the Grammys, Jamaica is always present. In the 2018 staging it was Shaggy’s on-stage performance that ensured Jamaica’s presence at the live Grammy show, and when he uttered “I’m a Jamaican in New York”…the crowd response peaked.

However, it wasn’t Shaggy’s performance which caused all the backstage rumbling that kept Jamaicans awash with emotion. It was Jr Gong [Damian Marley], and, more specifically, the ‘Marley factor.’

…This abundance of presence at the Grammys on the part of the Marleys has concerned Jamaicans in particular, and thus each year upon the release of the nominees for the ‘Best Reggae Album’ category, there is the inevitable combination of glee, grief, concern, and trepidation.

…Chronixx was leading in the court of public opinion ahead of all the other nominees and in particular, the only one close to him was Morgan Heritage, who were nominated for their Avrakedabra album, in the poll conducted by the Recording Academy. Unfortunately, the award is not granted on the basis of public opinion, sales figures, or even musical appeal…

To date, Ziggy Marley has won a total of seven Grammys. Stephen and Damian Marley as well as Bunny Wailer (a Marley connection), won three each.

Despite this — or perhaps because of it — a Kingston-based blogger believed the Rastafarian spirit and energy of reggae music could be losing its power:

It was through music that slaves communicated, the drums warned other slaves and motivated them toward rebellion and change. Reggae music with its origin in Jamaica was one of the most effective tools in advocating for peace and unity, challenging political movements and creating change…

Bob Marley’s messages of love and unity was perhaps not as successful in the 1970s because our violence was imported and managed by and for external interests. As Babylon prepares for its fall, its hold on Jamaica is compromised, and this is the right time for the Rastafari messages of love and unity. Consciousness and liberation are still some of the messages we associate and expect from Rasta, unfortunately, it would appear that Rasta has lost its value locally and as an agent of change in our society.

Bob Marley, Reggae music and Rastafarianism represents a few of the most renowned parts of Jamaican culture, it seems however that the Marley legacy is busy chasing Grammys as opposed to using music to create change…as was the real impassioned legacy of Robert Nesta Marley, Reggae and Rastafari. We are left with Capitalist Rastafari, token international Grammy awards, and an ailing culture directed by dancehall music, reversely influenced by Hip-hop and the American lifestyle!

While younger Jamaicans acknowledge the Marley legacy, reggae music and its fans are changing as the world changes.

Chronixx, whose lyrics deal with climate change, rising crime, and internet addiction, is being called the “new golden boy” of reggae. His hit song “Do It for the Love, not for the Likes”, became a popular Jamaican catchphrase and hashtag, #DoItFortheLove.

In response to all these changes, if Bob Marley were alive today he might well remind us of a line from his song “Natural Mystic”: “There’s a natural mystic blowing through the air…if you listen carefully now you will hear.” In other words, time, space — and everything in it — move along naturally. Maybe in the end, it all comes down to the music, no matter how it evolves.