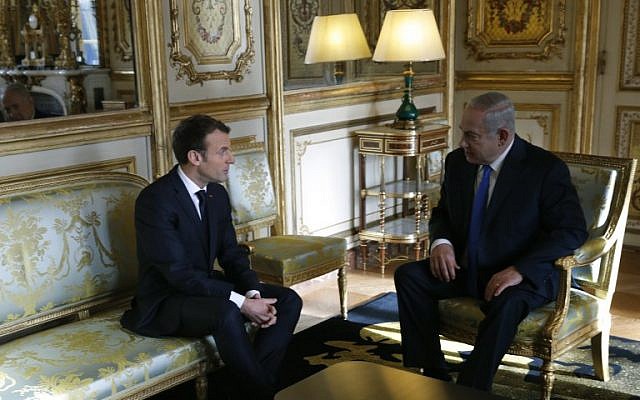 During their talks in Paris on Sunday, Prime Minister Benjamin Netanyahu told French President Emmanuel Macron that he would be prepared to make “compromises and concessions” to the Palestinians within the framework of US President Donald Trump’s much-touted Middle East peace plan, Israel’s Channel 10 TV news reported on Tuesday.

The report, which quoted unnamed senior European diplomats familiar with the content of the two men’s discussions, was denied by the Prime Minister’s Office.

At their Elysee Palace meeting, according to the report, Macron said to Netanyahu, “Trump told me that, within a few months, he will set out a peace plan that will be different from previous initiatives. It will be a move that will shake up the status quo.”

Netanyahu reportedly responded, “I’m still waiting to see the Trump initiative. I don’t know exactly what he is going to put on the table. But I will be prepared to make compromises and concessions within the framework of the plan he presents.”

To which Macron reportedly replied, “The trouble is that, in the wake of Trump’s declaration on Jerusalem, it will be complicated to advance a peace initiative.” Last Wednesday, Trump announced that the US recognizes Jerusalem as the capital of Israel, and that he would ultimately move the US embassy from Tel Aviv to Jerusalem. 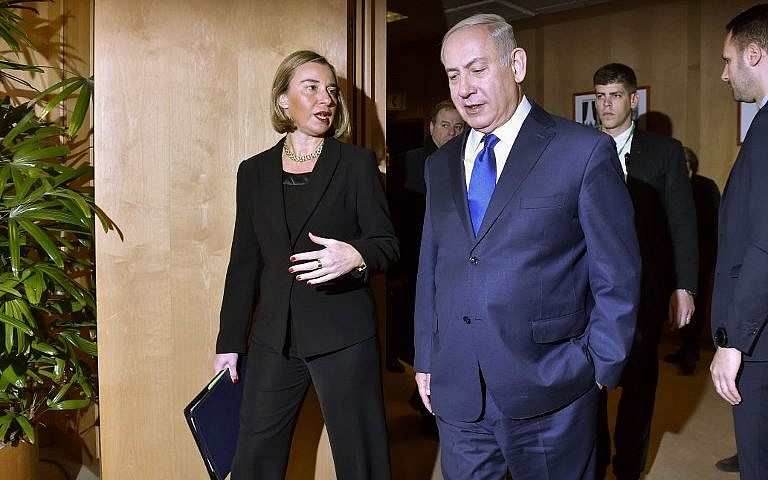 EU foreign policy chief Federica Mogherini speaks with Prime Minister Benjamin Netanyahu as he arrives for their meeting at the European Council in Brussels on December 11, 2017. (AFP Photo/Pool/Eric Vidal)

Quoting next from Netanyahu’s conversation Monday with Mogherini, the report said the prime minister told the EU foreign policy chief, “Trump is preparing a serious peace plan, and it must be taken seriously. At present, there are a lot of waves [in the wake of the Jerusalem announcement]. But when they die down, his plan will again be taken up.”

Netanyahu reportedly added, “Trump’s announcement on Jerusalem was cautiously worded. Read it carefully. It doesn’t close the door on negotiations for an agreement.”

The Prime Minister’s Office denied the key quotation in the TV report. In a statement, it said, “We firmly deny that the prime minister spoke of compromises and concessions. Prime Minister Netanyahu said that he expects Trump’s plan will challenge him and [Palestinian Authority President Mahmoud Abbas]. Apparently, there is an interest in Europe in presenting things differently.”

The report quoted the European sources as saying that both Macron and Mogherini were “skeptical” about Netanyahu’s professed readiness to compromise.

In a joint press conference after their meeting on Sunday, Macron expressed his disapproval of the US recognition of Jerusalem as Israel’s capital, and urged Netanyahu to “show courage” in advancing peace talks.

Netanyahu, for his part, insisted that Jerusalem is as much Israel’s capital as Paris is France’s. And he said the sooner the Palestinians “come to grips” with that the fact, “the sooner we move toward peace.” 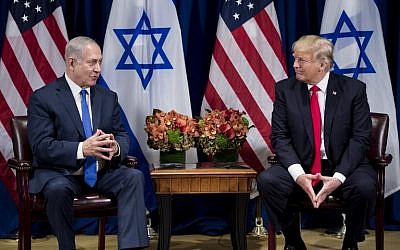 US President Donald Trump listens while Prime Minister Benjamin Netanyahu speaks to the press prior to their meeting at the Palace Hotel in New York City ahead of the United Nations General Assembly on September 18, 2017.(AFP Photo/Brendan Smialowski)

Later Sunday, the prime minister told reporters that he was not yet fully aware of Trump’s peace proposal, but noted that Jerusalem is one of the “core issues” that will be on the table. “We never ruled out that Jerusalem be discussed. The Palestinians have their positions on it, and they are free to bring them up,” he said.

“We never rule out discussions — we rule out [certain] results,” he added, noting that his government’s opposition to a partition of Israel is well-known.

Standing next to Mogherini, the EU foreign policy chief, at the headquarters of the European Union after their talks on Monday, Netanyahu predicted that most countries on the continent would eventually recognize Jerusalem as Israel’s capital and move their embassies to the city.

“I believe that even though we don’t have an agreement yet, this is what will happen in the future,” he said. “I believe that all, or most, of European countries will move their embassies to Jerusalem and recognize it as Israel’s capital and engage robustly with us, for security, prosperity and peace.”

Mogherini later issued a flat rejection of that notion. “He can keep his expectations for others, because from the European Union member states’ side this move will not come,” she said, adding that the bloc — the Palestinians’ largest donor — would stick to the “international consensus” on Jerusalem.

She reiterated the EU’s stance that “the only realistic solution” for peace is two states — Israel and Palestine — with Jerusalem as a shared capital and borders based on the pre-1967 lines, when Israel captured East Jerusalem, the West Bank and Gaza Strip in the Six Day War.

And she pledged to step up efforts with the two sides and regional partners, including Jordan and Egypt, to relaunch the peace process. 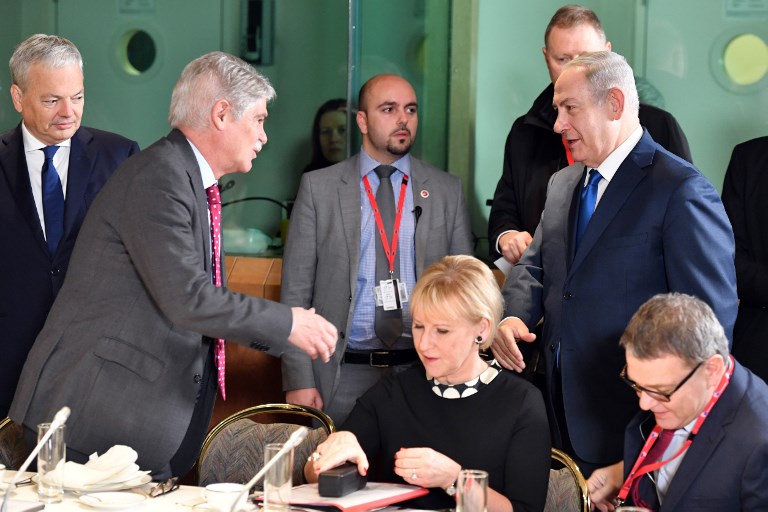 Leaving Brussels after a further meeting, with EU foreign ministers, Netanyahu told reporters who were traveling with him Monday that he had been asked whether he accepts the two-state solution, and that he replied by asking the ministers what kind of state the second one would be: “Would it be Costa Rica or Yemen?”

He said he also told them that it was high time for a more realistic discussion about where the region is headed, and said the current turmoil in the Middle East is due to a battle between “modernity and early medievalism.”