Breaking records, over 1,300 Jews on Tuesday visited the Temple Mount in the Old City of Jerusalem for the Tisha B’av fast commemorating the destruction of the Jewish temples that once stood at the site.

Despite fasting, 1,043 people braved the heat and went up to the Mount during the morning visiting hours, while hundreds more waited in line to visit the holy site.

The site reopened to Jewish visitors in the afternoon. By 5 p.m., almost 1,300 non-Muslim visitors had toured the site.

Hebrew media reports said the number was unprecedented since Israel captured the OId City in 1967.

In light of recent tensions surrounding the site, the Jewish visitors were required to leave their identity cards with police before passing through metal detectors at the Mughrabi Gate, the only gate to the compound through which non-Muslims may enter.

Because of the large number of people seeking to go up to the compound, visitors were escorted around the site in larger groups than usual, Israel Radio reported. 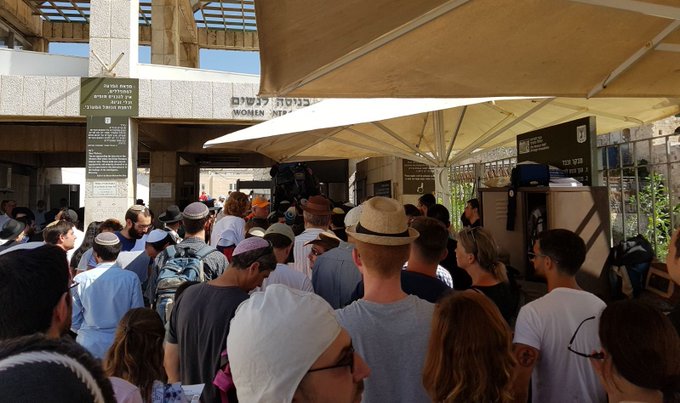 Police said that six people were ejected from the Temple Mount for violating the site’s rules for non-Muslim visitors, which include a prohibition on prayer, while four people were arrested after a scuffle broke out between three Jews and a Muslim man as one of the groups was leaving the compound through the Chain Gate. In addition to the extra security measures at the Mughrabi Gate, large numbers of police were deployed throughout the Old City ahead of the expected arrival of tens of thousands of worshipers to the Western Wall throughout the day.

Police said cars would be prohibited from entering the Old City beginning at 5 p.m., except those belonging to Old City residents.

On Monday night, thousands of Jews attended prayers at the Western Wall to observe the start of Tisha B’Av, days after violence shook the city.

Prayer leaders read aloud from the Book of Lamentations, believed by Jews to be the biblical prophet Jeremiah’s account of the destruction of the First Temple by invading Babylonians in 586 BCE.

The Western Wall is a remnant of the retaining wall of the Second Temple, built on the site of the First and destroyed by the Romans in 70 CE.

The wall is at the foot of the Temple Mount compound, known to Muslims as the Haram al-Sharif, which houses the Al-Aqsa Mosque and the gilded Dome of the Rock shrine in the heart of the Old City. The compound is the third-holiest site in Islam, after Mecca and Medina in Saudi Arabia. It is the most sacred site for Jews.

Tisha B’Av commemorates the destruction of both temples, as well as several other disasters in Jewish history. Jewish men pray at the Western Wall in Jerusalem’s Old City during the annual Tisha B’Av fast day commemorating the destruction of the Jewish temples, on July 31, 2017. (AFP/Menahem Kahana)

The event comes after relative calm returned to Jerusalem following almost two weeks of Palestinian protests over security measures at the Temple Mount, installed after a July 14 terror attack in which three Israeli Arabs shot dead two Israeli policemen with weapons they had smuggled into the compound.

Muslim worshipers had refused to enter the Temple Mount until the security installations at entrances to the site were removed, while Palestinian protesters staged near-daily protests in and around East Jerusalem and the West Bank, some of which turned violent.

The clashes left five Palestinians dead. A week after the Temple Mount terror attack, a Palestinian terrorist broke into a home in a Jewish settlement in the West Bank and stabbed three members of a single family to death while they were having Shabbat dinner. In a Facebook post hours before his murderous spree, the terrorist cited the events surrounding the Temple Mount as a main motivator.

The crisis was contained last week when Israeli authorities removed the newly installed measures, including metal detectors, following heavy pressure from Jordan, the custodian of the Temple Mount, and the Palestinians. The site has frequently been a flashpoint in the Israeli-Palestinian conflict.

AFP contributed to this report.

2 thoughts on “1,300 Jews Get To Visit The Temple Mount: To Honor The 2 Jewish Temples That Once Stood There”