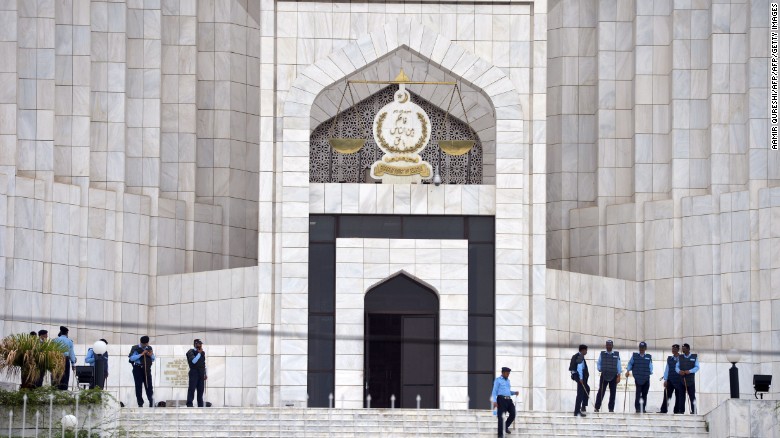 Pakistani policemen stand guard at the premisses of the Supreme Court building during a hearing on the Panama Papers case in Islamabad on July 28, 2017.

Islamabad, Pakistan (CNN)Pakistani Prime Minister Nawaz Sharif has been disqualified from office by the country’s Supreme Court and will be required to step down.

The court ruled Sharif has been dishonest to parliament and to the judicial system and is no longer deemed fit for the office of prime minister. A panel of five judges announced their unanimous decision Friday afternoon.
The panel had been investigating Sharif’s alleged links to offshore accounts and overseas properties owned by three of his children.
The assets, which were not declared on the family’s wealth statement, were revealed in the massive Panama Papers leak in April 2016.
Although Nawaz Sharif was not named in the Panama Papers, a joint investigation committee formed by the Supreme Court in April 2017 concluded in mid-July that their investigation revealed incriminating documents that pointed to the prime minister and his family’s corruption.
The Panama Papers leak sparked mass protests in Pakistan and calls from opposition political groups for a panel to investigate him and his children over their alleged offshore accounts. 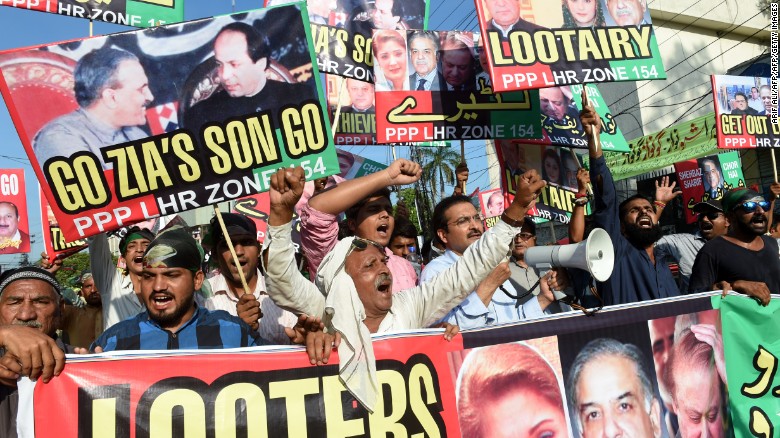 Supporters of the Pakistan Peoples Party (PPP) take part in a protest against Prime Minister Nawaz Sharif in Lahore on July 23, 2017.
Today’s verdict is the second Supreme Court ruling this year on Sharif. In April a five-judge panel formed by Pakistan’s Supreme Court delivered a ruling ordering a new investigation over corruption allegations.
This is the first time in the country’s history that a leader has been disqualified from office following a judicial process.
During his time in office there’s been economic growth, a marked drop in terrorism and a bold foreign policy initiative which has led to strong ties with neighboring China and the formation of the strategically important China Pakistan Economic Corridor.

Known as the “Lion of Punjab,” the 68-year-old Sharif is one of Pakistan’s leading industrialists and richest men, as well as being a fearsome political operative — having served as prime minister twice before.
However, his long political career has been dogged with missteps and allegations of corruption, which already forced him to step down during his first time as prime minister, cutting his first term short after his family-owned business, Ittefaq Industries, was seen to grow tremendously during his tenure in office.
Re-elected in 1997, Sharif ordered Pakistan’s first nuclear tests but a showdown with the nation’s powerful military saw his second term end prematurely as well.
In 1999, Sharif fired then-army head Pervez Musharraf after a failed invasion of Kargil, in Indian-held Kashmir. But in a dramatic turnaround, Musharraf launched a coup and eventually had his former boss imprisoned on charges of hijacking for attempting to stop a plane carrying the general from landing.
Sharif was later sentenced to an additional 14-years in prison on corruption charges, but was released after six months when Riyadh brokered a deal to allow him to go into exile in Saudi Arabia.
In 2007, Sharif returned to his homeland after his Pakistan Muslim League Nawaz (PML-N) teamed up with the Pakistan Peoples Party (PPP) to force Musharraf out of office.
After some legal and constitutional wrangling Sharif was re-elected prime minister for a third time in 2013, amid accusations of rigging the elections.

From Panama to Pakistan

The latest and final nail in Sharif’s political coffin is not of his own making, but rather the financial improprieties of his children.
While owning property in itself is not illegal, opposition parties have questioned if the money to buy them came from public funds.
And while Sharif was not personally named, his three adult children were linked to offshore companies that owned the London properties. One British Virgin Islands holding firm listed his daughter, Maryam as the sole shareholder.
A taskforce called the Joint Investigation Team was created in April by the Supreme Court since it was unable to independently determine the links to corruption. At the time Sharif pledged that if anything from the investigation proved corruption, he would step down.
Last November, Maryam tweeted images of a disclosure form claiming she was not the owner of the London property. However, the document, dated 2006, used a font — Calibri — that did not become widely available until the following year.