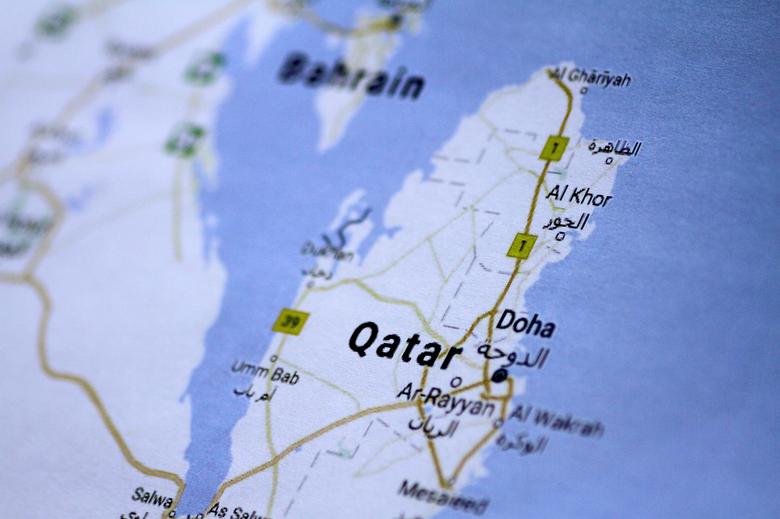 A map of Qatar is seen in this picture illustration June 5, 2017. REUTERS/Thomas White/Illustration
By Arshad Mohammed and Steve Holland | WASHINGTON

The United States will quietly try to calm the waters between Saudi Arabia and Qatar, current and former U.S. officials said on Monday, arguing that the small Gulf state was too important to U.S. military and diplomatic interests to be isolated.

U.S. officials were blindsided by Saudi Arabia’s decision to sever diplomatic ties with Qatar in a coordinated move with Egypt, Bahrain and the United Arab Emirates, the current and former officials said.

In announcing the decision to cut ties, Saudi Arabia accused Qatar of providing support to Shi’ite Iran, which is in a tussle for regional supremacy with Riyadh, and to Islamist militants. [nL8N1J252R]

Washington has many reasons to want to promote comity within the region. Qatar is host to the largest U.S. air base in the Middle East at Al Udeid, a staging ground for U.S.-led strikes on the Islamic State militant group that has seized parts of Syria and Iraq. U.S. Donald Trump has made defeating Islamic State a priority of his presidency.

Further, Qatar’s willingness to welcome organizations such as Hamas, which Washington brands a terrorist group, and the Taliban, which has fought U.S. forces in Afghanistan for more than 15 years, allows contacts with such groups when needed.

“There is a certain utility,” one U.S. official said on condition of anonymity. “There’s got to be a place for us to meet the Taliban. The Hamas (folks) have to have a place to go where they can be simultaneously isolated and talked to.”

The current and former U.S. officials said they were unable to identify precisely what may have triggered the four countries’ coordinated decision to cut ties, which was later followed by Yemen, Libya’s eastern-based government and the Maldives.

They said the Saudis may have felt empowered by the warm embrace that Trump gave them when he visited Riyadh in May and adopted a harsh anti-Iran stance.

“My suspicion is (they felt) emboldened by what Trump said on his visit and … that they feel they have got some kind of backing,” said a former U.S. official. “I don’t know that they needed any more of a green light than they got in public.”

A senior administration official told Reuters the United States got no indication from the Saudis or Emiratis in Riyadh that the action was about to happen. The White House said on Monday it was committed to working to de-escalate tensions in the Gulf.

In Riyadh, Trump made an impassioned appeal to Arab and Islamic leaders to “drive out” terrorists, while singling out Iran as a key source of funding and support for militant groups.

U.S. officials in multiple agencies stressed their desire to promote a reconciliation between the Saudi-led group and Qatar, a state of 2.5 million people with vast natural gas reserves.

“We don’t want to see some kind of permanent rift and I suspect we won’t,” said the senior Trump administration official on condition of anonymity, adding the United States would send a representative if the Gulf Cooperation Council nations met to discuss the rift with Qatar. [nL1N1J21IX]

“There’s an acknowledgement that a lot of Qatari behavior is quite worrisome not just to our Gulf neighbors but to the U.S.,” said the senior administration official. “We want to bring them in the right direction.”

Marcelle Wahba, a former U.S. ambassador to the UAE and the president of the Arab Gulf States Institute in Washington think tank, said the United States had leverage but would use it discreetly.

“The U.S. will step up to the plate. How we will do it? I think it will be very quiet and very much in the background,” she said. “I doubt very much we will sit on the sidelines and let this crisis get more serious.”

Qatar’s backing of Islamists dates to a decision by the current ruling emir’s father to end a tradition of automatic deference to Saudi Arabia, the dominant Gulf Arab power, and forge the widest possible array of allies.

Qatar has for years presented itself as a mediator and power broker for the region’s many disputes. But Egypt and the Gulf Arab states resent Qatar’s support for Islamists, especially the Muslim Brotherhood, which they see as a political enemy.

“We are engaging with all of our partners … to find a way to reassemble some GCC unity to support regional security,” said another U.S. official, saying it was critical to “maintain the fight against terrorism and extremist ideology.”