(CNN) China called for a “peaceful” resolution to tensions on the Korean Peninsula Wednesday, as a United States aircraft carrier strike group churned towards the contested region.

Chinese President Xi Jinping discussed the situation in North Korea and Syria with US President Donald Trump in a telephone call on Wednesday, China’s foreign ministry said, in what one analyst described as a “new phase” of China-US relations on North Korea.
“I think at this point the common interest between the US and China outweigh (North Korea saber-rattling),” Alexander Neill, a senior fellow at the International Institute for Strategic Studies in Singapore, told CNN. 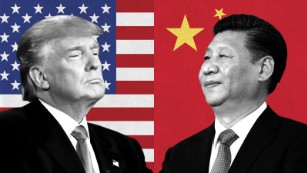 Trump & Xi’s North Korea problem
“China may be prepared to do some sort of trade off… They want to rein in (leader) Kim Jong Un.”
Trump has repeatedly called on China to do more to rein in its unruly neighbor, which has stepped up its missile development and nuclear program since 2016.
The US dispatched the aircraft carrier USS Carl Vinson after the latest missile test by North Korea last week, drawing a forceful warning from Pyongyang.
China’s Ministry of Foreign Affairs spokesman Lu Kang said Trump and Xi had pledged to stay in close contact after their first meeting earlier this month and the phone call didn’t indicate any change in China’s position.

The unexpected phone call between the two came after Trump turned to Twitter to vent his frustrations over North Korea.
“I explained to the President of China that a trade deal with the U.S. will be far better for them if they solve the North Korean problem,” he tweeted.
“North Korea is looking for trouble. If China decides to help, that would be great. If not, we will solve the problem without them! U.S.A.,” he wrote in a second tweet.