China and Finland look to the future 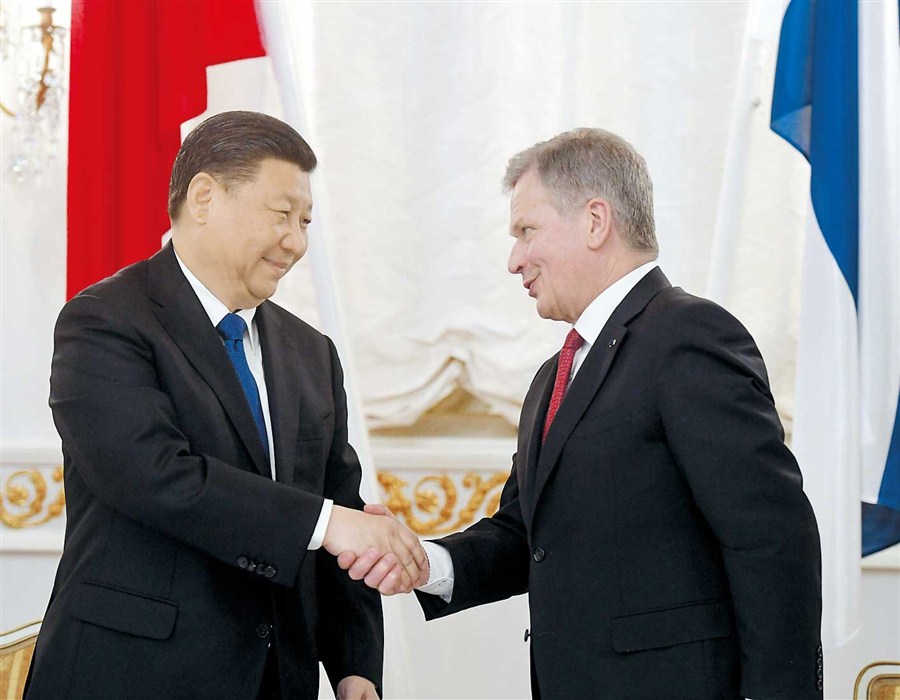 President Xi Jinping and Finnish President Sauli Niinisto shake hands after a signing ceremony at the Presidential Palace in Helsinki yesterday. The visit is Xi’s first trip to a European Union member state this year. Today he will travel to Florida to meet US President Donald Trump. — AFP

During talks between visiting President Xi Jinping and his Finnish counterpart Sauli Niinisto, the two heads of state stressed that to build a more forward-looking and strategic bilateral relationship that keeps pace with the times was in the fundamental interests of both countries.

“China and Finland are good friends and partners who respect each other, treat each other as equals and enjoy mutually beneficial cooperation,” Xi said. “The peoples of our two countries have always cherished a friendly sentiment toward each other.”

Noting that the development needs of China and Finland fit well with each other, Xi called on both sides to increase high-level exchanges, build up strategic mutual trust, explore potentials for cooperation and give support to each other in development.

Niinisto warmly welcomed the Chinese president for his visit on the occasion of the centenary of Finland’s independence.

Finland highly values China’s achievements in development and its important role in international affairs, he said.

The Finnish side hopes to carry out more high-level contacts and exchanges in all areas with China, and deepen cooperation in economy and trade, investment, innovation, environmental protection, tourism, winter sports and Arctic affairs, as well as within the framework of China’s Belt and Road initiative linking Asia with Europe and Africa, Niinisto said.

Finland also wants to strengthen communication and coordination with China on major international issues and push for an even closer cooperation between the European Union and China, he said.

In a written speech delivered on his arrival, Xi first extended congratulations to the Finnish government and people on the centenary of Finland’s independence.

“Since China and Finland established diplomatic ties 67 years ago, our relationship has maintained a steady and sound development no matter how the international landscape changes,” Xi said.

“Our relationship has become a model of friendly co-existence and mutually-beneficial cooperation between countries that are different in population and size, history and culture, social system and development level,” he said.

Xi said he looks forward to having in-depth exchanges of views with Finnish leaders on the China-Finland relationship and other issues of mutual concern, thus charting the course for the future development of the bilateral relations.

“I believe that with concerted efforts of both sides, my visit will achieve a complete success,” he added.

The two sides have cooperated in areas such as high technology, clean energy, innovation and Arctic research, and further cooperation on winter sports is expected as China will host the 2022 Winter Olympic Games.

Xi’s visit to Finland is his first trip to a European Union member state this year, and also his first to the Nordic region as president.

After Finland, Xi will travel to Florida today for a meeting with US President Donald Trump.

It will be the first meeting between Xi and Trump, heads of state of the two biggest economies in the world.