74 die in collapse at power plant 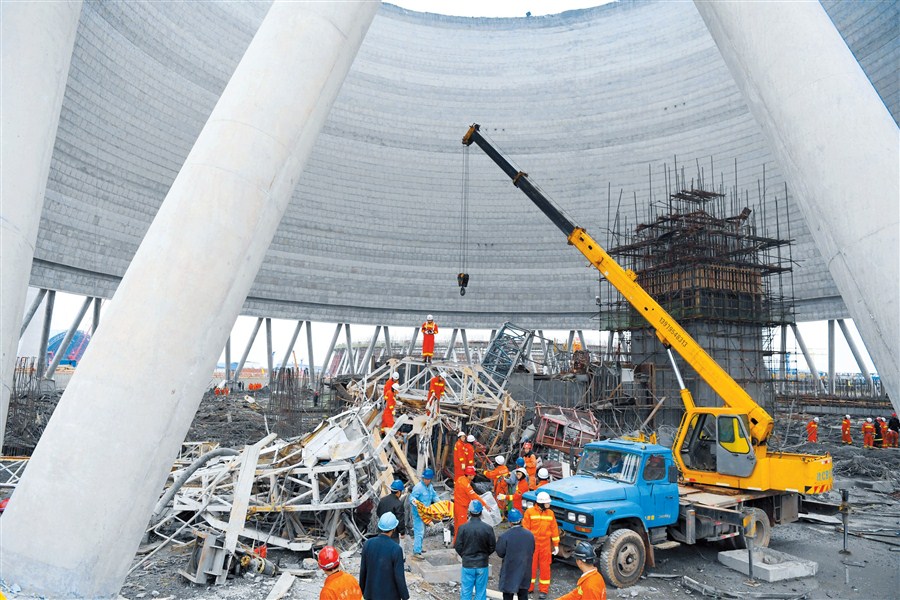 Rescuers at work after scaffolding at a power plant cooling tower suddenly collapsed in Fengcheng, a city in east China’s Jiangxi Province yesterday, killing 74 workers and leaving another two injured. President Xi Jinping urged local authorities to step up rescue efforts, treatment and follow-up work, and ordered “no stone unturned” during an investigation into the accident. — Xinhua

RESCUERS said 74 people died and two others were injured when a construction platform collapsed in east China’s Jiangxi Province yesterday.

More than 60 people were working on the platform and another dozen were on the ground waiting to begin their shift at 7am when the platform of a power plant’s cooling tower under construction collapsed in the city of Fengcheng, they said.

More than 300 rescuers, two drones and seven cranes are involved in the search for other victims. The two workers injured are receiving treatment at hospital, where one is in a critical condition.

Wang Yaosheng, who was waiting to begin his shift, narrowly escaped death by running away when he saw the falling platform.

“Several elevators collapsed. All those on the platform fell and were crushed by the steel bars and other materials,” he recalled. “I was shocked.”

The dead were taken to a funeral home 10 kilometers from the collapse site where a staff member said: “We will clean up the bodies once the police have collected DNA.”

As of last night, 68 victims had been identified. Most of them were born after 1980, with the youngest at 23 years old.

According to rescuers, most victims were from the provinces of Hebei and Hubei.

Construction of the cooling tower is part of an expansion plan at the Fengcheng Power Plant, with an estimated cost of 7.67 billion yuan (US$1.1 billion).

The plant is owned by Jiangxi Ganneng Co Ltd, a state-owned power corporation listed in Shenzhen. Trading of its shares was suspended following the accident.

The tower was being built by Hebei Yineng Tower Engineering Co Ltd. According to Liao Huishou, an engineer from the firm in charge of the project, the designed height of the tower under construction is 156 meters, and over 70 meters had been built since April.

Liao said it is a complicated project because of its double-curve design and the construction platform is adjusted based on the height of the tower. The project was planned to last 26 months.

“Time was very pressing and the construction was very difficult,” said Liao.

President Xi ordered those involved to leave no stone unturned when investigating the accident. A number of work safety accidents had occurred recently, and local governments must learn from these accidents and ensure any potential work safety issues are addressed, Xi said.

Earlier this month, 33 miners were killed in a gas explosion at a coal mine in Chongqing in China’s southwest.

In April a chemical fire burned for 16 hours in the eastern province of Jiangsu after an explosion at a facility storing chemicals and fuel, requiring 400 firefighters to quell the flames.

Efforts should be made to ensure the safety of people’s lives and property, Xi said.

Premier Li said a work group from the State Council will be set up and led by the State Administration of Work Safety to provide guidance and help with the rescue effort.

One thought on “China: 74 die in collapse at power plant”