Taiwan braced for Typhoon No. 3 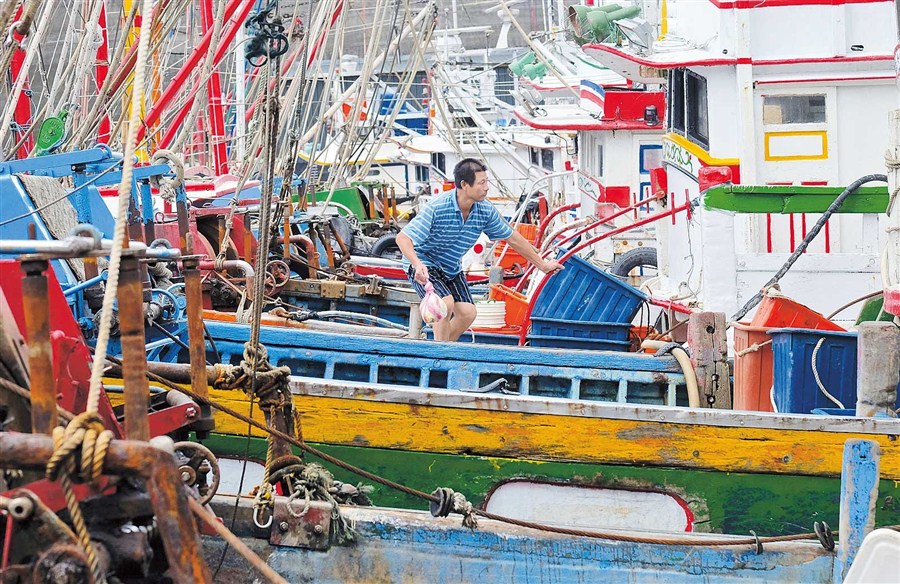 A worker crosses boats moored at the Dasi fishing harbor in east Taiwan’s Yilan County yesterday as Typhoon Megi approaches. Taiwan has evacuated thousands of tourists from outlying islands and set up nearly 100 shelters across the island. — AFP

TAIWAN has evacuated thousands of tourists from outlying islands and set up nearly 100 shelters across the island as it braces for its third typhoon in two weeks.

The east coast is still reeling from damage caused by Super Typhoon Meranti earlier this month — the strongest storm for 21 years to hit Taiwan — followed by Typhoon Malakas.

The same part of the island is in the firing line again from approaching Typhoon Megi, which is already bringing strong winds and waves.

A 700-ton crane was blown over at a harbor in the eastern area of Hualien. It crushed a nearby building but no one was injured.

Megi is due to make landfall on the island’s east coast this afternoon and forecast to bring almost a meter of rain to some areas over three days.

Ferries to Taiwan’s Green Island and Orchid Island were halted yesterday after more than 3,700 visitors were evacuated over the weekend.

Flights and trains in Taiwan were disrupted by the typhoon’s approach and most cities planned work and school closures today.

The island’s bullet train will suspend services and EVA Airways Corp, one of Taiwan’s main international airlines, said it was canceling or rescheduling some international flights.

More than 35,000 soldiers are on standby to help with disaster relief and 92 shelters are open for residents.

“The storms eye will be closest around noon tomorrow, affecting Taiwan the whole day,” said Lin Chih-hui, a forecaster at Taiwan’s weather bureau. “There is still a chance it might strengthen,” she said.

Mountainous regions in the northeastern county of Yilan and Hualien — already hit by the previous storms — could be lashed by up to 900 millimeters of rain by tomorrow, increasing the risk of landslides, the bureau said.

After it hits Taiwan, Megi, the 17th typhoon this year, is expected to move to the coastal areas of Fujian and Guangdong tomorrow morning, according to a statement from the headquarters.

The regions in Megi’s path have only just been hit by Meranti and Malakas, the 14th and 16th typhoons of this year, making disaster response and relief work more difficult, the statement said.

At 8pm yesterday, the center of the typhoon was about 440 kilometers southeast of Taitung in Taiwan in the Pacific Ocean, packing winds of up to 45 meters per second, the National Meteorological Center said.

Megi will head northwest at 20 kilometers per hour, bringing wind and rain, according to the NMC, which renewed a yellow alert.